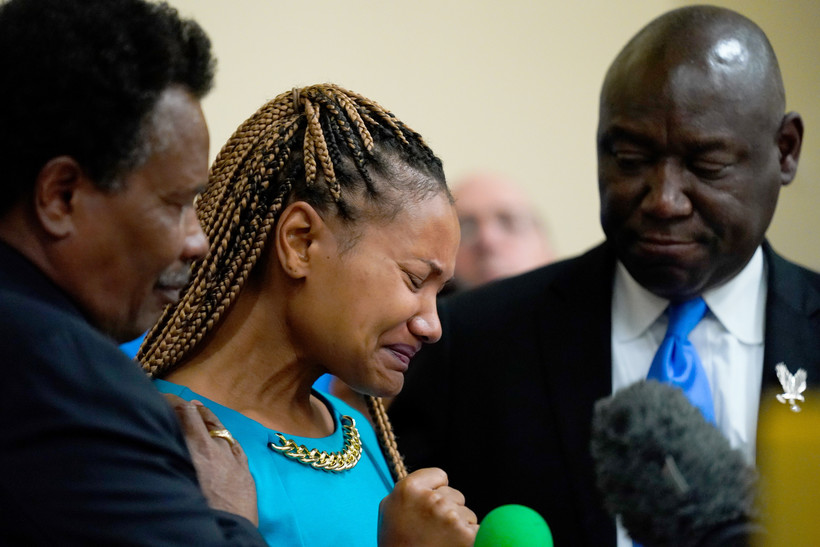 Kamilah Whitfield, center, a granddaughter of Ruth Whitfield, a victim of shooting at a supermarket, speaks with members of the media during a news conference in Buffalo, N.Y., Monday, May 16, 2022. Matt Rourke/AP Photo

As US Senate takes up gun legislation package, Wisconsin senators weigh in

Now, the bill is in the Senate's hands. It needs support from 10 Republicans to be signed into law.

One of Wisconsin's senators, Democrat Tammy Baldwin, says she will support the bill.

"Congress has a moral responsibility to take action on gun violence, but so far Senate Republicans have blocked common sense gun safety reforms. I am pleased that we may have enough Senate Republicans to move from doing nothing to doing something about gun violence," Baldwin said in an emailed statement to Wisconsin Public Radio. "While this bill does not do everything I support — like expanding background checks for all gun sales — it is a good first step that will help keep our communities safe and help save lives."

I stand on the side of taking action and this is a positive step forward that can help protect people from gun violence, mass shootings, and help save lives. https://t.co/B0GKnGt3bH

A spokesperson for Republican Ron Johnson said the senator is waiting to see the text of the bill before he makes a decision.

The House passed the legislation by a mostly party-line vote of 223-204.

Democrats tried, unsuccessfully, to introduce a wide range of gun-related bills before the recent mass shootings.

Senators say they've come to an agreement on a series of gun control measures that include some, but not all, of the elements of the House's bill. It would give states money to pass and implement so-called "red flag" laws to remove guns from potentially dangerous people as well as money for school safety and mental health resources. It also expands background checks for gun purchases for people between the ages of 18 and 21 and penalties for illegal straw purchases by convicted criminals.

"While I think these are measures in the right direction, most of them are pretty moderate, and so I wouldn't expect it to have a big impact — certainly not immediately — on gun violence numbers," Adam Winkler, a professor at UCLA's School of Law who specializes in constitutional law and gun policy, told WPR's "Central Time." "If we can break the logjam that has prevented any new consideration of significant reform for over 10 years since the Newtown shooting, then this might be a breakthrough that could lead, potentially, to future reforms."

The House draft of the bill includes a plan to increase the minimum age to purchase semi-automatic weapons to 21, from 18. The Senate version would strengthen background checks on that age group, including previously blocked juvenile records. The suspects in the shootings at the Uvalde elementary school and Buffalo supermarket were both just 18, authorities say, when they bought the semi-automatic weapons used in the attacks.

"What we know about the brain and how the brain processes information in terms of long-term consequences, risk-taking behavior, we know the brain really changes when the brain gets a little older," Winkler said. "To the extent that we could move people from 18 to 21 to get their hands on firearms, I think that would be really helpful, not only when it comes to mass shootings ... but young people are much more apt to commit suicide with firearms."

In Wisconsin, the majority of gun deaths — 68 percent as of 2020 — are suicides. Gun homicides, at 28 percent, are a smaller share, though the rate of murders by gun in Wisconsin has increased by 189 percent from 2011 to 2020, compared to a 70 percent increase nationally. Police shootings make up 2 percent of gun deaths in the state, and accidental discharges are 1 percent. Gun homicides or attempted homicides take an emotional and mental health toll on communities, in addition to the physical damage.

While mass shootings are far less common than gun deaths from suicide, accidental discharges or murder, they leave long-lasting trauma on both those involved and the nation-at-large that often prompts wider outcry for political change.