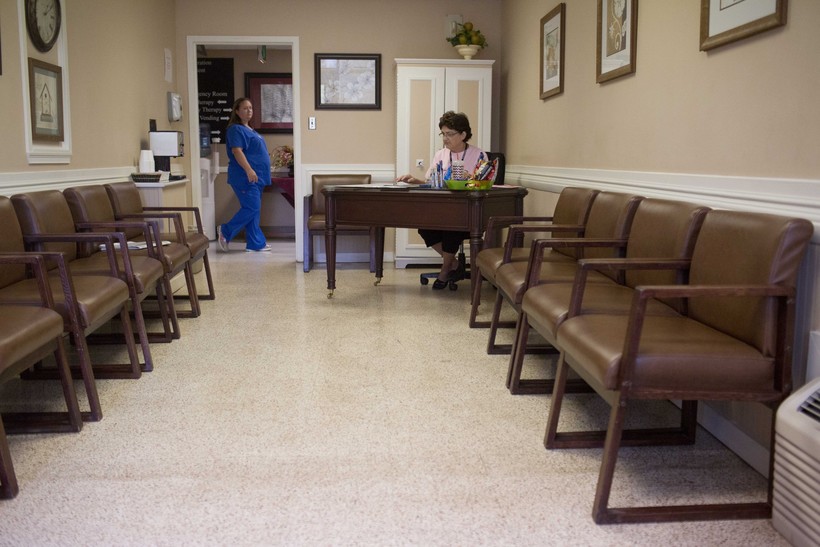 In this Thursday, July 30, 2015, photo, hospital worker Barbara Parker, right, reads a magazine in the wiring room of Wedowee Hospital, as another employee walks by the door way in Wedowee, Ala. Eight rural hospitals have closed in Alabama over the last 15 years and more closures are possible as rural hospitals struggle to stay open. Brynn Anderson/AP Photo

Medical schools across the country have seen a sharp decline in rural students. This comes at a time when Wisconsin and other states are facing a physician shortage in sparsely populated communities.

Wisconsin’s two medical schools both have programs designed to cultivate rural doctors. The Medical College of Wisconsin (MCW) has satellite campuses in Wausau and Green Bay in addition to its main campus in Milwaukee. MCW officials say 48 percent of first-year medical school students in Green Bay self-identified as rural on their application. Sixty-five percent of those who began medical school this year at the Wausau campus said they were born or grew up in a rural community.

The University of Wisconsin-Madison School of Medicine and Public Health didn’t immediately have geographic data for students going through its Wisconsin Academy for Rural Medicine. The program started in 2008 and will graduate its 10th class this year.

"So we’ve had 180 graduates overall. About half of the students are practicing rural medicine in Wisconsin, which I think is really a remarkable number when you consider that most traditional medical schools nationally can expect maybe 8 to 13 percent of their students to end up in rural medicine without a special program," said Dr. Joseph Holt, director of the Wisconsin Academy for Rural Medicine at UW-Madison.

Milwaukee’s medical school has graduated three classes since ramping up its rural outreach. None of the students have finished their residency yet, so it’s uncertain where they’ll eventually end up practicing.

In its latest workforce report, the Wisconsin Hospital Association said data show that if you take a Wisconsin student, put them through a Wisconsin medical school and place them in a Wisconsin residency, there’s an 86 percent chance that new physician will stay in Wisconsin to practice.

Primary care, OB-GYN and psychiatry have the largest shortages. Twenty of Wisconsin’s 72 counties have no practicing psychiatrists.

To try to address this, MCW opened two new psychiatry residency programs in the northeastern and central part of the state.

"We’ve increased the total number of trainees for psychiatry in the state by 40 percent. And we’ve done it in areas closer to rural communities. If one or two residents stay in those areas every year, we would substantially change the access to mental health care for rural citizens in the state of Wisconsin," said Dr. Joe Kerschner, provost and dean of the School of Medicine at the Medical College of Wisconsin. "We’re confident that some of them will stay close to rural areas of our state."

One way to increase rural medical students is to have pipeline programs for high school students in rural areas, suggest the authors of the Health Affairs study.

"That involves both the quality of education for rural students as well as role modeling that is giving rural youth some exposure and some sense of possibility of their future as a physician," said Scott Shipman, lead author of the study.