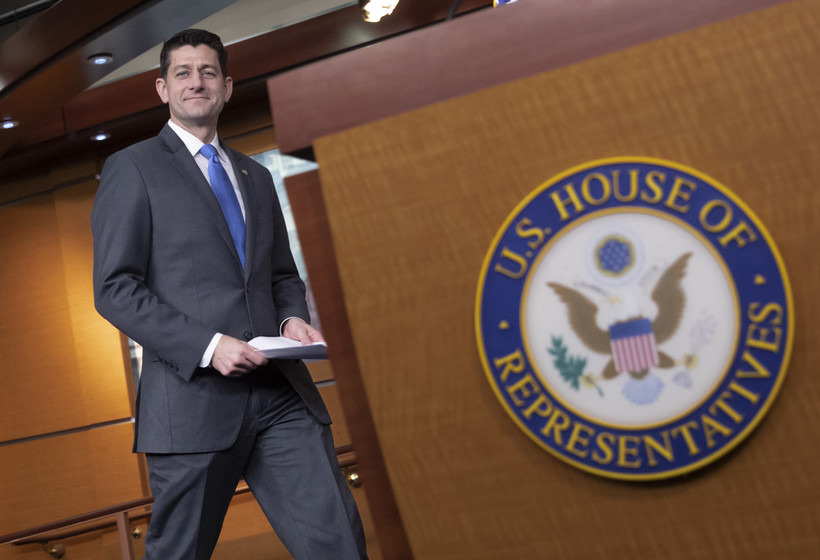 Speaker of the House Paul Ryan, R-Wis., announces to reporters he will not run for re-election and will retire next year, injecting another layer of uncertainty as Republicans face worries over losing their majority in the fall, at the Capitol in Washington, Wednesday, April 11, 2018. J. Scott Applewhite/AP Photo

Ryan Says He'll Serve Out His Term But Won't Run In 2018
By WPR Staff
Share:

U.S. House Speaker Paul Ryan of Janesville won't seek re-election this year, telling reporters at a Wednesday press conference that he wants to spend more time with his family.

"My kids weren't even born when I was elected," said Ryan, who was first elected in 1998. "If I'm here for one more term, my kids will have only have known me as a weekend dad. I just can't let that happen."

Ryan, 48, said he will serve out his term and stay on as speaker for the next six months.

The news was first reported Wednesday morning by the political news website Axios. Ryan's retirement has been rumored since December.

Serving as speaker has been a great honor. Now, with all three of my kids in their teens, I am ready to set new priorities. I intend to serve my full term as I was elected to do. But I will be retiring in January, leaving this majority in good hands and with a bright future. pic.twitter.com/LfyZtZOIn4

Gov. Scott Walker, who grew up in nearby Delavan, said being House Speaker had encroached more and more on Ryan's family life.

"He's going to be missed, but I can certainly honor and respect his decision," Walker told reporters in Wausau.

Walker pointed out that when Ryan was 16, he found his own father dead of a heart attack. Ryan's children are now teenagers themselves.

"That's remarkable for anyone to go through," Walker said. "And then to think about having kids about that same age."

President Donald Trump, a fellow Republican with whom Ryan often found himself at odds with during the 2016 campaign, praised the speaker on Twitter, calling him a "truly good man" with a "legacy of achievement that nobody can question."

Speaker Paul Ryan is a truly good man, and while he will not be seeking re-election, he will leave a legacy of achievement that nobody can question. We are with you Paul!

"We know each other well and while we have different views on policy, I consider him a friend and have a lot of respect for him as a person and a public servant," Baldwin said.

A Political Skirmish In The 1st

Ryan's departure comes at a time when Republicans nationally face a difficult election cycle, leading some Democrats to believe they could flip control of the U.S. House, and maybe win Ryan's district in the process.

Already, two Democrats — ironworker Randy Bryce and teacher Cathy Myers — have been running to replace Ryan. Bryce's campaign, in particular, has seen a surge in national fundraising with Democrats pushing to oust the speaker.

Bryce said in an interview that people doubted his chances when he got into the race last year.

"Today, I would say that all those people that had doubted us are rethinking their positions," Bryce said.

Ryan's decision could set off a skirmish among Wisconsin Republicans vying to replace him. Ryan has held the 1st Congressional District in southern Wisconsin since 1999.

"Since Speaker Ryan's decision today, I have received calls from a number of friends and leaders in the First Congressional District urging me to run," Steil said in an email. "I am giving this serious consideration."

Others thought to be interested in the seat include Wisconsin Assembly Speaker Robin Vos, R-Rochester, who praised Ryan on Wednesday but did not say whether or not he would run for his seat.

"I am happy for my friend and his family, but sad for the 1st Congressional District and our country because men like him don't come around often," Vos said in a written statement.

Reince Priebus, the former White House Chief of Staff and Republican National Committee Chair, has also been discussed as a possible candidate for Ryan's seat. Priebus is originally from Kenosha.

"I’m so proud of my friend for all he’s accomplished as a dedicated and principled public servant — always putting faith and family first," Priebus said in a tweet Wednesday.

Paul Nehlen, the white nationalist who lost to Ryan in a Republican primary in 2016 by an 84-16 percent margin, had already been campaigning against Ryan this year. Nehlen, who was banned from Twitter earlier this year for a racist tweet, issued a statement on Facebook celebrating the announcement.

Marquette University Pollster Charles Franklin said with or without Ryan, Wisconsin's 1st Congressional District would be challenging for Democrats to win.

But Franklin said Ryan's decision would be a "psychological blow" to Wisconsin Republicans on the ballot in 2018, including Walker.

"Even if we take him completely at his word that he feels like he served in Congress and wants time with his kids before they're grown, that still is a very hard message to deliver on the campaign trail as opposed to, 'I'm standing in solidarity with my Republican colleagues, and I, like them, am taking my case to the voters,'" Franklin said.

As she sat down for lunch at a restaurant in downtown Janesville, Linda Fruhwirth said she thinks Ryan is a "fantastic individual," and she hopes this isn’t the end of his political career.

"But I think you reach a point of ... he's done some things that are close to his heart and he's like, 'enough is enough,'" she said. "The party's going to have to get their stuff together."

Fruhwirth said she's frustrated with the Trump administration, and thinks the Republican Party has "lost a lot of good people" since the president took office.

Don Eddy, another Janesville resident who identifies as an independent voter, also thought Ryan may be resigning due to frustration with other members of Republican leadership in Washington.

"He's arguing with the rest of the Republican Party that are turning into a bunch of Trump supporters," Eddy said.

Eddy also said the potential of a "blue wave" in the November election may have motivated Ryan’s decision.

Outside the Greendale Library in the northeastern edge of the 1st Congressional District, Robert Johnson said he'd be glad to see Ryan leave.

"He did not step up and do what he should do," Johnson said, citing Ryan's resistance to stronger gun laws.

Mark Loughran said Ryan had a tough job as speaker, but he did it well.

"He was between a rock and a hard place," Loughran said. "Having Trump as a loose cannon doesn't help."