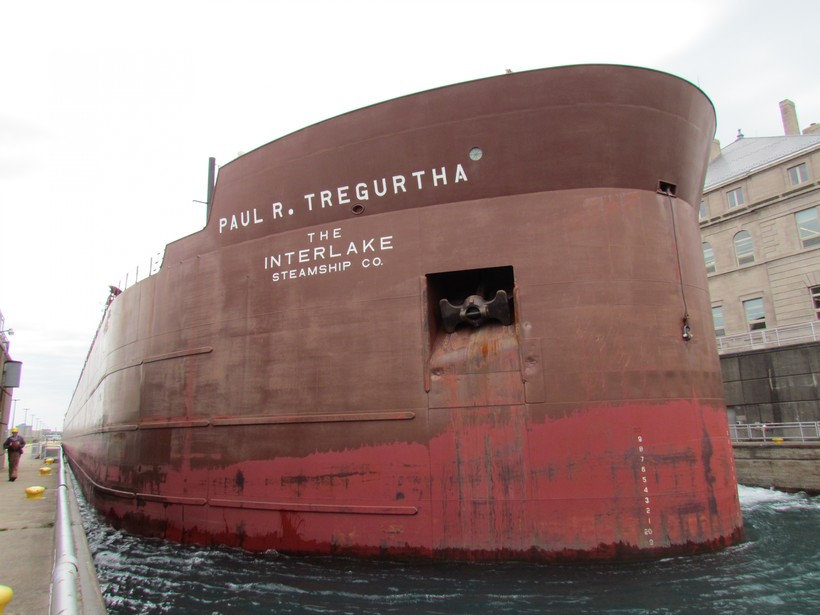 Aging Poe Lock Is The Only One That Can Handle Thousand-Foot Ships
By Danielle Kaeding
Share:

The U.S. Army Corps of Engineers is putting $32 million toward the design and construction of a new lock at Sault Ste. Marie, Michigan. Shipping industry advocates say another lock is vital to improving the resilience of the Great Lakes economy.

Only the aging Poe Lock at Sault Ste. Marie can handle 1,000-foot ships that haul iron ore and other cargo from the Twin Ports to the lower lakes, according to Adele Yorde with the Duluth Seaway Port Authority.

"All of the coal from the Midwest Energy dock (in Superior) goes out on thousand-footers primarily, probably 95 percent is on the thousand-footers," she said. "The same can be said for the iron ore that moves out from the two ore docks here in Duluth."

Around 35 million tons of cargo moves through the Twin Ports each year on average, Yorde said. Iron ore makes up nearly 60 percent of the cargo heading down to the lower lakes. She said the funding in the Corps’ fiscal 2019 work plan is a huge first step in the right direction.

"Each year that goes by, the aging infrastructure that’s there, the Corps does a wonderful job of maintenance every winter when we’re in winter layup season, but we all hold our breath that the gates hold for the whole next season to make sure there’s no interruption in that service," she said.

The Poe Lock was first built in 1896, and it was rebuilt again in 1968. The lock has been updated and maintained by the Army Corps of Engineers. However, a 2015 Department of Homeland Security report said failure of the lock for six months during the shipping season could put 11 million people out of work.

"I’m just really excited and really grateful. It’s going to be a happy Thanksgiving and it’s going to add resiliency to the North American manufacturing," he said. "That is really what this is all about is making sure, God forbid, there’s a problem somewhere in that Soo Lock chain that we can provide the steel, the coal, the construction stone that keeps the manufacturing basis of North America moving forward."

Weakley hoped the $32 million in funding would be combined with $52 million being set aside for the project from the state of Michigan.

"If you add the federal money to the state money, we’re about $84 million and that’s enough to complete the design work and begin dredging and doing some construction work," said Weakley. "It’s really the best possible scenario."

The Army Corps of Engineers said the money will go toward deepening the upstream channel.

The project is expected to cost around $1 billion and take at least seven years to build.