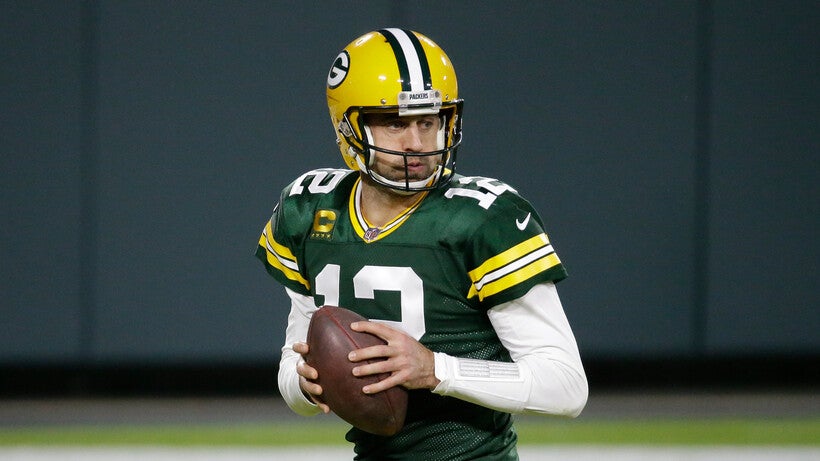 Green Bay Packers' Aaron Rodgers drops back during the second half of an NFL football game against the Philadelphia Eagles Sunday, Dec. 6, 2020, in Green Bay, Wis. Mike Roemer/AP Photo

Updated: Aaron Rodgers Is 'Immunized' Against COVID-19 But He's 'Not Going To Judge' Teammates Who Aren't

Aaron Rodgers is vaccinated against COVID-19, he told reporters on Thursday.

The Green Bay Packers quarterback said he has teammates who aren’t vaccinated, and he thinks it’s a personal decision.

"I’m not going to judge those guys," he said at a news conference.

"There’s guys that have been vaccinated that have contracted COVID, so it’s an interesting issue that I think we’re going to see played out the entire season," he said.

More the 91 percent of NFL players have received at least one shot, according to The Washington Post. And the newspaper reports that just a handful of teams have vaccination rates below 89 percent.

The league’s high vaccination rate doesn’t ensure smooth sailing for the upcoming season — which the Packers begin on Sept. 12 against the New Orleans Saints.

Last month, Milwaukee Brewers star Christian Yelich tested positive for COVID-19 despite being fully vaccinated. And "breakthrough" cases have become increasingly frequent as the delta variant has made its way across the country.

Mark Murphy, president and CEO of the Packers, has talked about the importance of getting the shots. Lambeau Field served as a mass vaccination site earlier this year.

But a handful of NFL players have been outspoken about not getting vaccinated. They include Minnesota Vikings quarterback Kirk Cousins and Buffalo Bills wide receiver Cole Beasley, who’s currently away from the team after being deemed a close contact to someone who tested positive for the virus.

On Wednesday, a group of doctors from northeast Wisconsin held a news conference to dispel myths about the vaccine and encourage residents to wear masks.

Dr. James Heise from Door County Medical Center said it's likely people are going to be in one of two camps.

"You’re either going to be vaccinated or you’re going to get sick," he said.

According to the state Department of Health Services, Brown County is experiencing a very high rate of COVID-19 disease activity.