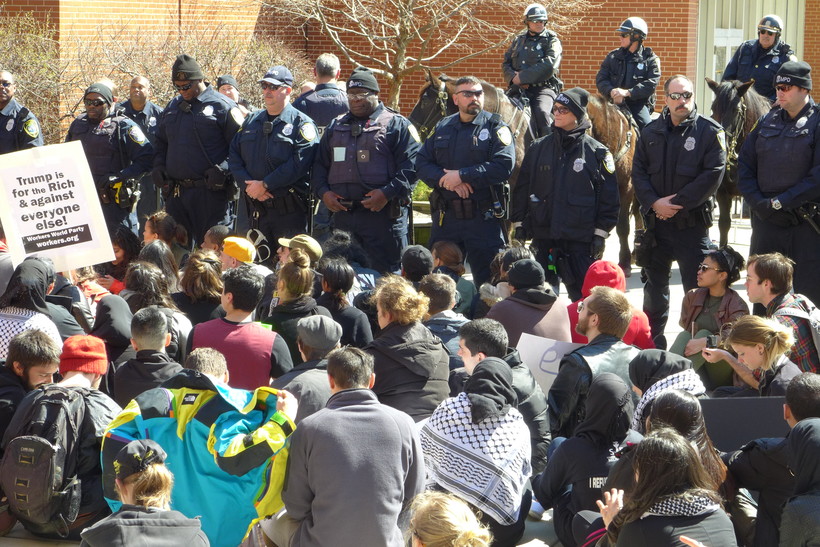 Sitting on the sidewalk between the theater and the campus library, students and others chanted anti-Trump slogans and called for school Chancellor Mark Mone to explain why the town hall was allowed to happen on campus.

"I'm here today because I don't support racism," said UW-Milwaukee junior Teonna Cooksey. "Racism is not allowed on my campus. And what Donald Trump’s values and what he wants America to be like isn't what I envision for myself and my community."

Cooksey said she thought there were "a lot of issues that need to addressed" with the town hall happening on the campus, which hosted a Democratic presidential debate in February.

"As a public university, we allow outside entities to lease our facilities and we do not restrict their use based on the content of any individual or entity’s message. Such openness is consistent with our commitment to free speech and academic freedom," Mone wrote in a letter sent to the campus community on Friday.

Students coming and going from the library, including junior Nicholas Medina, stopped to watch the protesters. Medina said he always likes to see students being politically active on campus and thought it was good to see students protesting. But, he said it was also a positive thing to have Trump on campus.

"I think it's good any time a nationally recognized politician is here on campus because it draws attention to the importance of our campus and shows we are an important place to be," he said. "So, even if controversy is involved in it, I think it's still good."

The town hall airs on Sunday at 7 p.m.