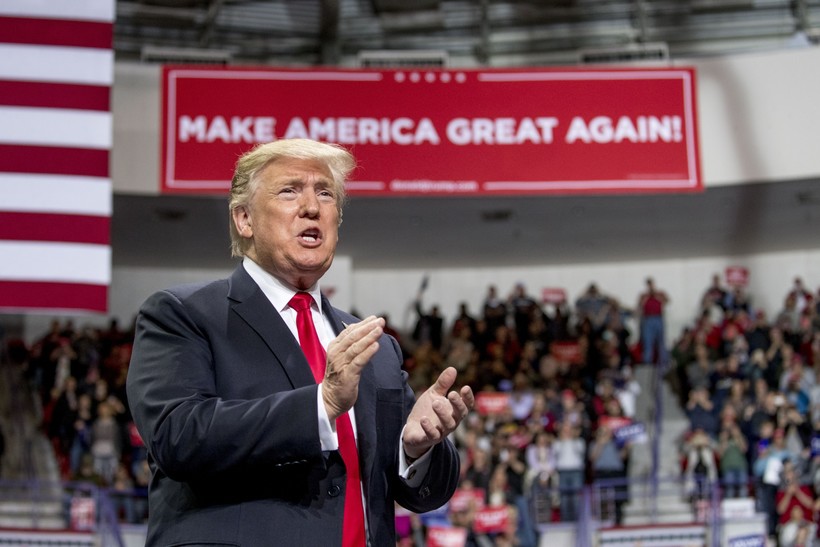 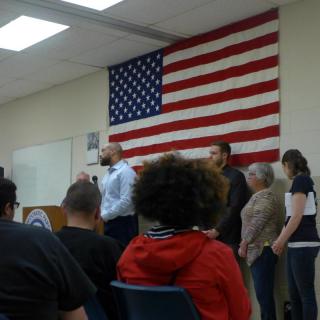 President Donald Trump cheered the thriving U.S. economy and criticized his Democratic presidential opponents during a rally held in an arena full of supporters in Green Bay on Saturday night.

The president spoke for more than an hour-and-a-half to the thousands of backers who greeted him at Resch Center for the 7 p.m. event.

Trump asked supporters, "Is there any place that's more fun than a Trump rally?" And he assured them there's no one he'd rather be with.

The president opened the rally on a somber note, offering his condolences for the victims of a synagogue shooting near San Diego.

During his remarks, Trump touted his record on the economy, citing figures showing a first-quarter jump in the country's gross domestic product and low unemployment.

On the subject of immigration, Trump promised to have 400 miles of wall built on the U.S.-Mexican border "by the end of next year."

He also had some comments targeted at Wisconsin voters, including a pledge he made last month for the Great Lakes Restoration Initiative. He mentioned military contracts for state-based companies like Marinette Marine and the Oshkosh Corp.

That the president held the triumphant rally at Resch Center was surely a political calculation. Wisconsin is still a battleground state and it helped propel Trump's 2016 victory. Democrats are now focused on reclaiming the state in the 2020 election.

During his speech, Trump focused particular attention on the roster of Democrats hoping to unseat him. He saved a few of his most pointed comments for his Democratic opponents, including nicknames he uses for them:  "Sleepy Joe (Biden)"; "Crazy Bernie (Sanders)"; and then he used a derisive term for Elizabeth Warren, calling her "Pocahontas."

He accused the Democrats of being "outside the American mainstream."

"It is crazy what is going on with them," he said. "Oh, do I look forward to running against them."

Trump said Democrats want a $100 trillion "government takeover of the U.S. economy, known as the 'Green New Deal.'"  While proponents of the Green New Deal proposal see it as an economic stimulus package based on eco-friendly initiatives, the president doesn't see it that way.

"We are going to rip down every building in Manhattan and build a new building in its place," he said.

He said the Democratic Party should change its name to "the radical left Democrat party."

"(They) would drive our nation into economic and financial ruin very quickly," he said.

Then, as another apparent attempt to appeal to Wisconsin voters, he added, “And they will take your guns away, too by the way."

But besides looking ahead to the next election, Trump also held the rally as a form of counterprogramming. He scheduled the Saturday night rally at the same time the White House Correspondents' Association has its annual dinner in Washington, D.C. Trump has refused the association's invitation again, a break from past practice by the president.

During his speech, Trump gave a rare shout-out to spokeswoman Sarah Huckabee Sanders. He invited "the great" Sanders to say a few words.

She noted that a year ago, she attended the White House Correspondents Dinner, where a comic lampooned her in a way some found harsh. Rather than the dinner, she said, she chose to come to the rally with Trump.

She told the crowd, "It's pretty hot in this room tonight" and added "I'm so proud to work for the president."

Trump replied that his spokeswoman "is becoming too popular," riffing on his signature reality television line, "I'm telling you, Sarah, you're fired!"

The president wound up his remarks by saying that the country is "respected again."

Those words were met with a sustained chant by the crowd of "four more years."

Trump supporters began camping in line on Friday afternoon near the Resch Center.

Michael and Vicky Hansen, of Marinette, said that they got there Saturday morning and stood in line for hours. The Hansen's arrived at 11 a.m. for the 7 p.m. rally.

"This is exciting," Vicky Hansen said.

Her husband Michael added that he came to support the president.

"It is going to be one of the only opportunities to see a president that I actually voted for (that's) doing something," he said.

"I love him, I can't get enough of him. This is my seventh rally," she said.