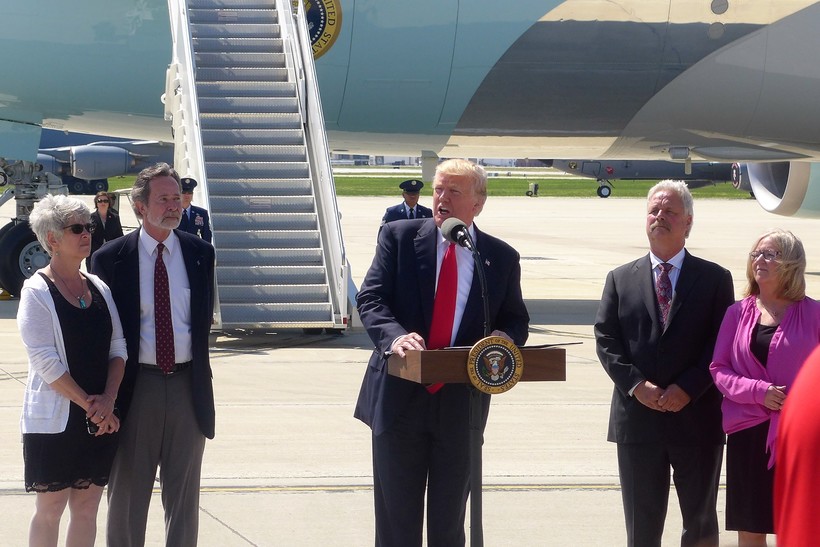 President Donald Trump, center, joined by Michael and Tammy Kushman from Marinette County, left, and Robert and Sarah Stoll from Kenosha, right, during a stop in southeastern Wisconsin on Tuesday, June 13, 2017.

Trump Hints At Major Jobs Announcement For Wisconsin During Visit

Trump Slams Obamacare Ahead Of Touting Importance Of Apprenticeships
By Ross Terrell And The Associated Press
Share:

Trump said Tuesday during a visit to the state that, "Just backstage, we were negotiating with a major, major incredible manufacturer of phones and computers and televisions, and I think they're going to give the governor a very happy surprise very soon."

Wisconsin Gov. Scott Walker flew to Japan for the weekend of June 2 but he and economic development leaders wouldn't say why. That same weekend, Michigan Gov. Rick Snyder flew to Asia in an attempt to lure Taiwan-based Foxconn to his state. It is considering spending $4 billion on a United States factory and hiring 5,000 workers to make display panels.

Foxconn assembles smartphones and other devices for Apple, Sony, Blackberry and other brands — mostly in China.

Trump was in southeastern Wisconsin to join Walker in a tour of Waukesha County Technical College and talk about the importance of providing on-the-job training to workers in industries that sometimes struggle to find qualified people.

Trump's tour of the school that included a stop at a classroom filled with tool and die machines. He spent the tour with his daughter, Ivanka Trump, Labor Secretary Alex Acosta and Walker.

During a round table conversation at the technical college, Trump said he wants every high school in America to offer apprenticeship programs.

Trump also said he loves the "name Apprentice" — a reference to the reality television show he used to host.

The round table included students, some of Wisconsin's biggest business leader and officials including the superintendent of the Waukesha School District to discuss the importance of apprenticeship programs.

The White House says apprenticeships could match workers with millions of open jobs. But the administration is reluctant to devote more taxpayer money to the effort.

Eric Haban of LDI Industries in Manitowoc started as a youth apprentice and said it "gave me a jump start to get into a field that I had no prior experience in."

The stop is part of Trump's push to boost jobs by increasing apprenticeships.

Trump said the learn-and-earn arrangements are going to be "a big, big factor" in his effort to add jobs employers are having trouble filling. The idea is for students to work at paid internships while they go to school, sometimes with companies footing the bill. Nine in 10 apprentices who complete their programs find jobs, according to the Labor Department.

There's evidence of bipartisanship at least for the idea of apprenticeships. President Barack Obama called for more in his 2014 State of the Union address. And this year's budget passed with about $90 million for apprenticeships. Trump proposes keeping that funding but cutting other worker training programs.

Democratic lawmakers and a union leader said Trump's visit to tout apprenticeship programs is a hypocritical photo opportunity given his budget proposal would cut funding for worker training.

Democrats spoke on a conference call Tuesday in advance of Trump touring the technical college.

Assembly Minority Leader Peter Barca said Trump is pulling a "bait and switch" by claiming he cares about workers while cutting resources to train them.

Trump's budget would cut federal money for job training by 40 percent next year.

U.S. Sen. Tammy Baldwin said in a statement that Trump's "rhetoric doesn't match the reality of the budget cuts."

Before heading to the technical college and meeting with Walker, Trump arrived Tuesday afternoon in Milwaukee and spoke briefly about efforts to repeal the Affordable Care Act.

Trump spoke to a crowd of about 100 people and highlighted two families Trump called "victims of Obamacare." He said millions of people have been victimized by the health care bill from the Obama administration and will benefit from the Republican replacement, the American Health Care Act.

"It’s time to give American families quality, reliable and affordable health care," he said. "And that’s what we are working very hard to do and we will get it done."

Standing on the tarmac at General Mitchell International Airport, Trump said the plan to repeal and replace Obamacare is making its way through the U.S. Senate; but no matter how good of a plan Republicans present, it will get zero votes from "the obstructionists. The Democrats."

"Obamacare is one the greatest catastrophes that our country has signed into law. And the victims are innocent and hardworking Americans," Trump said flanked by Wisconsin couples Michael and Tammy Kushman, and Robert and Sarah Stoll.

The AHCA narrowly passed the House of Representatives in May after an earlier failure to bring the bill to the House floor for a vote. Some moderate GOP senators have raised concerns about parts of the measure OK'd by the House.

Walker said Monday on the Mike Gallagher radio show that when Trump comes to Wisconsin, he will see people outside of Washington "still like his policies."

Walker said he told Priebus that he should, "Tell the president people outside of Washington still like his policies, still very much want him to move this country in the right direction."

There are 96,901 job openings on our state website. I'm glad @POTUS is coming to WI to talk about apprenticeships & technical education! pic.twitter.com/GJMg78fg1a

After the tour, Trump is to headline and host a $1,000-per-person fundraiser Tuesday night in Milwaukee for Walker. The fundraiser will be "one of the biggest events we've ever had for a statewide elected official," Walker said.

The most recent Marquette University Law School poll of Wisconsin residents from March showed more people disapproved of the job Trump had been doing than approved.

Editor's Note: This story was last updated at 9:43 a.m. to include additional comments from President Donald Trump.