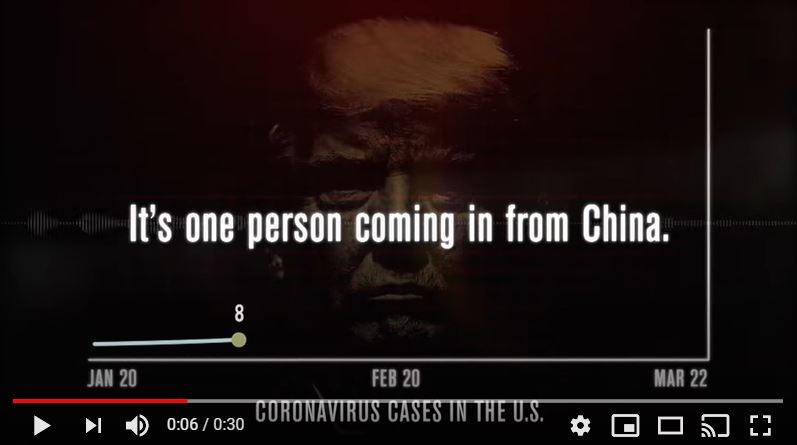 A screenshot of the ad "Exponential Growth" by Priorities USA. The Trump campaign announced Monday, April 13, 2020 its is suing Northwoods TV station WJFW-NBC for airing the ad.

President Donald Trump's reelection campaign has filed suit against a Northwoods TV station over an ad using the president's words to attack the administration's response to COVID-19.

The Rhinelander-based station WJFW-TV is owned by the small broadcasting company, Rockfleet Communications, which also owns stations in Bangor, Maine. It has aired an ad produced by Priorities USA, a liberal advocacy group not directly affiliated with any candidate or the Democratic Party.

The ad juxtaposes clips of Trump’s statements in January and February about the response to the virus — for example, his claim on Feb. 27 that the total number of United States cases "within a couple of days is going to be down close to zero" — with a graph showing the nation's growing number of COVID-19 cases.

The Trump campaign announced the lawsuit Monday in a statement that claimed the ad "contained intentionally false and defamatory statements about President Trump."

WJFW-TV station manager Steve Shanks did not respond to requests for comment by phone and email.

The Trump campaign previously sent a cease-and-desist letter to stations airing the ad. In a statement, campaign senior legal adviser Jenna Ellis said the organization "is now left with no other option than to use the force of law to ensure these false and defamatory ads cease."

Among the statements highlighted in the ad are Trump's Jan. 22 claim that the administration had the virus "totally under control" and, in the same interview, downplaying the disease as "one person coming in from China."

At issue from the Trump campaign is an audio clip of Trump saying "this is their new hoax." The campaign contends Trump was referring to criticisms of the administration's response to the virus as a "hoax," not the virus itself, an interpretation the campaign says is encouraged by an audio splice in the ad.

Two law professors interviewed by WPR said it's unlikely the Trump administration's legal claim will prevail. To prove defamation, the campaign will have to show the ad in its totality is false, and that WJFW aired it "knowing it was false, or with reckless disregard for the truth," said Erik Ugland, who teaches media law at Marquette University.

Still, defending against the lawsuit could be a burden for the station.

"They're going to incur a bunch of costs that they're just going to have to absorb even if they ultimately prevail, which I'm quite certain they will," Ugland said.

Anuj Desai, a professor teaching First Amendment law at the University of Wisconsin-Madison, said it's rare for any court to issue an injunction barring political speech. Awards of damages are more common, but Desai said it seems unlikely that the campaign will seek money in the lawsuit.

"Do you really want money from the Northwoods station?" Desai said, referring to the Trump campaign. "Maybe you do, but honestly what you want is to take the thing down. And that's what you're not going to be able to get."

Ugland said the decision to sue WJFW specifically rather than Priorities USA or one of the dozens of other TV stations airing the ad was likely strategic.

"A small station with few resources in rural Wisconsin is much easier to intimidate than a station that's part of a huge national chain," Ugland said.

After the campaign initially sent cease and desist letters to TV stations in March, Priorities USA expanded its ad buy with a $600,000 purchase in Arizona. The organization has said it will spend $6 million on anti-Trump ads in swing states.

WJFW's coverage area includes much of Wisconsin's Northwoods as well as the Wausau area. The region gave Trump some of his highest-voting margins in the 2016 election, and a strong showing there is seen as important to his reelection chances.