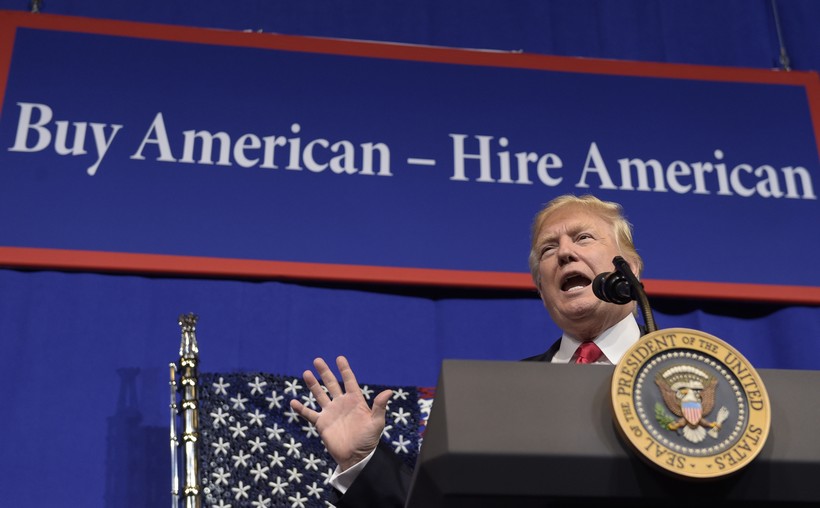 President Donald Trump used a visit to Kenosha on Tuesday to criticize recent changes to Canada's dairy pricing system as unfair to Wisconsin's farmers and said he plans to start working on the issue immediately.

Trump made the remarks during an event at the headquarters of tool maker Snap-on Inc. where he signed an executive order to tighten rules for skilled foreign workers entering the United States.

"It's another typical, one-sided deal against the United States and its not going to be happening for long," Trump said.

"Of course, having a USDA secretary confirmed and having a U.S. trade representative confirmed would be very, very helpful. So we're waiting to see how fast those people can get in place," Brancel said.

While Trump spoke to the concerns of farmers and officials over the milk issue, he was officially in Wisconsin for the first time since taking office to publicly sign an order that targets the H-1B visa program used by technology companies to bring guest workers into the U.S. The White House says the program undercuts American workers by driving down wages with cheaper international labor.

"With this action, we are sending a powerful signal to the world, we're going to defend our workers, protect our jobs and finally, put America first.," Trump said. The order, dubbed "Buy American — Hire American" directs U.S. agencies to propose rules to prevent immigration fraud and abuse in the program, and agencies are being asked to suggest changes so H-1B visas are granted to the "most-skilled or highest-paid applicants."

The directive would encourage federal agencies to use more U.S.-made goods in construction and transportation projects.

Democrats held a Kenosha news conference near the Trump event and charged that, so far, the president has only offered lip-service to "buy American" policies.

Outside the venue, hundreds of protesters called on Trump to release his tax returns while they waited for the Republican to arrive at the Wisconsin manufacturing company.

The protesters outside Snap-on Inc. held signs criticizing several of Trump's policies, including his plan to build a wall on the border with Mexico and his proposed travel ban that's tied up in court.

Retired high school teacher Tom Gilding was among the protesters on Tax Day. He held a sign that read, "What are you afraid of, Donald? Release your taxes," and helped hold up an inflated chicken made to resemble Trump.

White House Chief of Staff Reince Priebus, of Kenosha, was also in attendance. House Speaker Paul Ryan was unable to attend because he's leading a congressional delegation on an overseas trip this week.