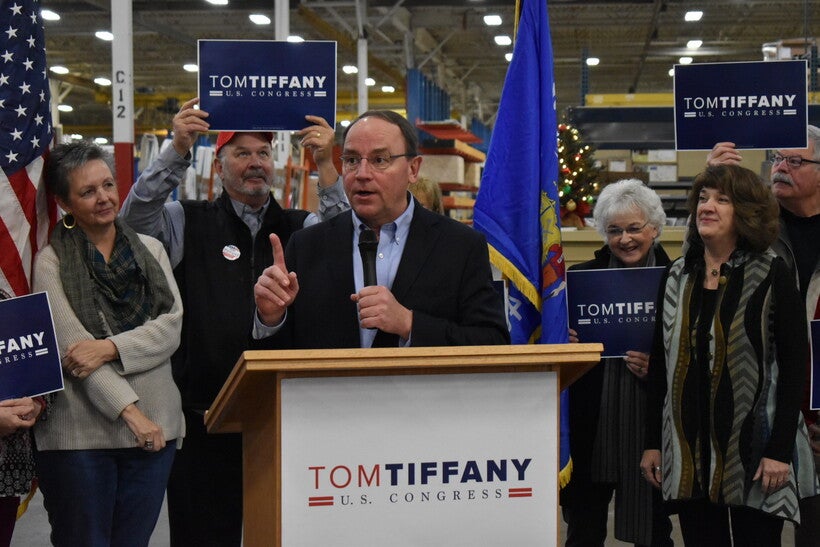 Tiffany, a state senator from Minocqua, is the Republican candidate in the 7th Congressional District's May 12 special election. Pence had recently been put in charge of the White House task force on the new coronavirus.

The collective response to COVID-19 escalated very quickly. That night, the NBA announced the suspension of its season. The next morning, Gov. Tony Evers declared a public health emergency in Wisconsin. By the afternoon, Pence's visit to the 7th Congressional District was canceled. Tiffany would later meet Pence on the vice president's April 21 visit to a GE Healthcare factory in Madison.

Efforts to slow the spread of COVID-19 have reshaped all of 2020's political campaigns, and the seismic changes to the economy and many people's lives have the potential to change the politics in the reliably Republican district, too. President Donald Trump won the 7th Congressional District by more than 20 points in 2016, and he’ll need to recreate his massive winning margins in rural Wisconsin if he's going to win the state in 2020.

That's why both parties will be watching the outcome of this special election for clues about how voters might be inclined to behave in November. 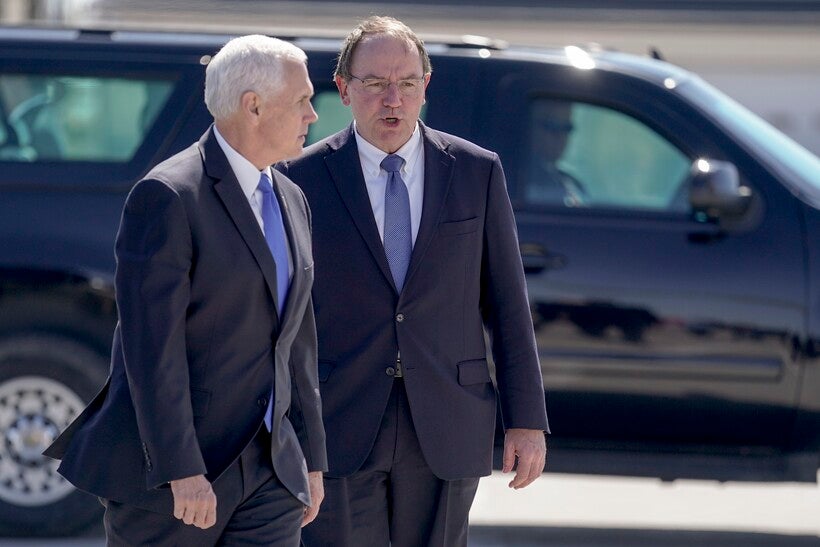 As for Tiffany, he's made his support of Trump the centerpiece of his campaign. He praises the president in his speeches and commercials; on social media, he juxtaposes his photo with Trump's.

"I'm the ally President Donald J. Trump needs to keep moving our country forward," he wrote in his Facebook post announcing his candidacy. He got the president's tweeted endorsement in April, and the campaign has touted it repeatedly.

But Tiffany, who has been in the state Legislature since 2010, has a legislative history that predates Trump, and a temperament that is nearly Trump's opposite. He's a soft-spoken, wonkish politician. In debates, he responds to harsh criticisms by saying, "I'm glad my opponent raises that issue."

But he's also a fierce ideological conservative who has consistently advanced Republican Party goals in office. It's earned him the loyalty of the state's conservative activists and bitter opposition from liberals.

Tiffany was the first politician to jump into the race to replace former U.S. Rep. Sean Duffy, the Republican who resigned from his seat in September. Tiffany faced a serious and well-funded primary challenger in Jason Church, an Afghanistan War veteran and former staffer to U.S. Sen. Ron Johnson. But Tiffany secured the endorsements of Duffy, former Gov. Scott Walker and a host of conservative advocacy groups, and in February he won the GOP nomination by 15 points. 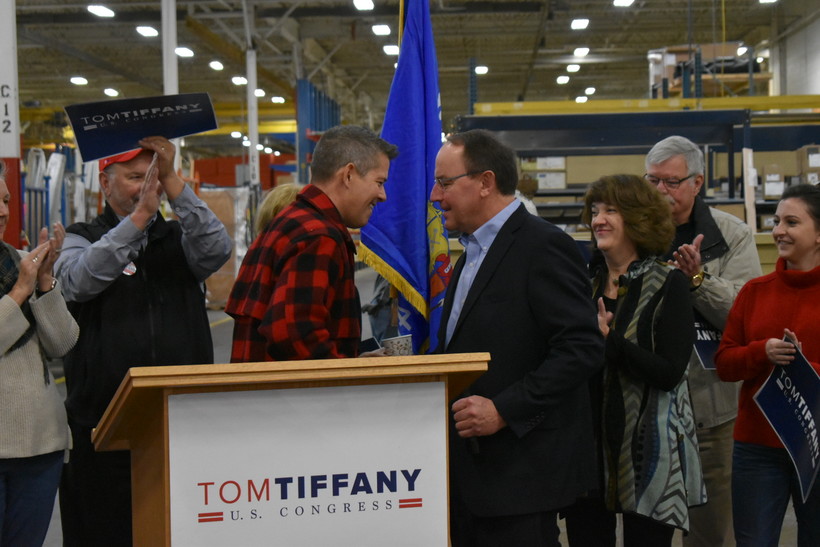 In his public statements, Tiffany has frequently alluded to Democratic efforts to flip the seat in the special election. In his announcement speech, he said that Democratic U.S. House Speaker Nancy Pelosi "is salivating about a low-turnout special election to flip a seat in Trump country." In a call with Trump campaign volunteers in April, he alluded to it again.

"The other side is motivated," he said. "They're out there working. We need to match that intensity, match that effort."

Tiffany, who with his wife owned a river cruise ship in northern Wisconsin for more than two decades, has been fighting for conservative causes for a decade himself. After an unsuccessful campaign in 2008, he was elected to the state Assembly in the Republican wave of 2010. He was a Walker ally during the battle over Act 10, the controversial law that effectively gutted public-sector unions in the state.

Eric Bott, a senior adviser to the political action committee AFP Action, said Tiffany is a rare case of a legislator who hasn't compromised his conservative principles. The PAC, which is affiliated with the right-wing Americans for Prosperity, has funded advertisements and mailers supporting Tiffany and attacking his opponents in more than one election cycle.

Bott said Tiffany has been a fierce defender of Northwoods industries including logging and agriculture.

"He's been a voice for economic recovery in the North," Bott said.

One of the biggest legislative fights of Tiffany's career was over a Northwoods mining project that never actually happened.

Tiffany led efforts in the Legislature to change Wisconsin's mining laws to help encourage the Florida-based company Gogebic Taconite to establish a massive open-pit sulfide mine in northern Wisconsin.

The project was one of Walker's top priorities and he highlighted projections that it would employ more than 3,000 people during a two-year construction period and nearly 3,000 more in permanent mining jobs. It would be a massive undertaking to get the project done, but with a high economic upside. In many ways, the Walker administration's pursuit of the large-scale project prefigured its work in 2017 to land another massive project: the Foxconn factory in southeastern Wisconsin. 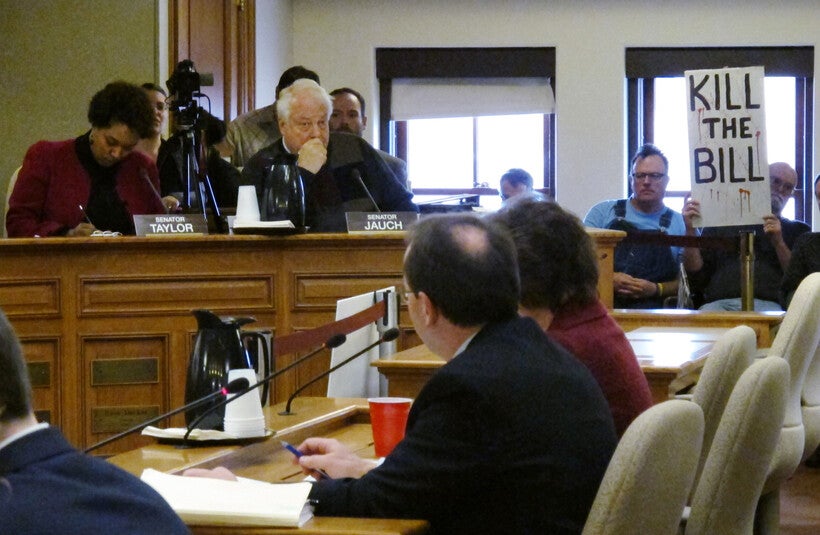 A protester holds up a sign of opposition during a public hearing on a bill designed to streamline the opening of a new iron mine in northern Wisconsin on Friday, Feb. 17, 2012, in Madison. Bill sponsors Rep. Tom Tiffany, R-Hazelhurst, and Sen. Pam Galloway, R-Wausau, address the Joint Finance Committee. Scott Bauer/AP Photo

One of the first things Wisconsin needed to do was to change state law to allow the company to obtain the necessary permits to launch the project. Tiffany was among the leading voices in favor of the mine, which set off protests from environmental advocates and eventually multiple legal challenges.

In a debate ahead of the 2012 election, Tiffany said Wisconsin should jump at the opportunity to establish a mine in the Northwoods.

"It is rare that any state gets a company that says, 'We want to invest $1.5 billion dollars in your state.' What a shot in the arm," Tiffany said. "And we can do this in an environmentally safe manner."

Environmentalists strenuously disagreed. They argued that the open-pit mining would pollute groundwater and put neighboring communities, including tribal lands, at risk.

In a 2015 interview with The Milwaukee Journal Sentinel, Tiffany called it a "badge of honor" to have been attacked by the Wisconsin League of Conservation Voters. He hung the group's "dishonor roll" designation in his office in the Capitol.

The legislation Tiffany championed passed in 2013, and Gogebic Taconite launched the exploration and permitting processes for the project. But it was tied up in court for years. By 2015, the economics of mining had changed, and Gogebic Taconite pulled out of Wisconsin, citing burdensome federal regulations.

Tiffany has continued to champion mining. He's spoken in favor of a proposed sulfide mine in Oneida County that just last month received the OK to explore a site near the Wolf River. It would be the first new mining site in Wisconsin in decades.

The Tiffany campaign didn't respond to a request from WPR for an interview for this story.

The response to COVID-19 has forced the Tiffany campaign to shift to virtual events, and it's led to a greater emphasis on absentee voting. But Tiffany didn't join calls to conduct the election entirely by mail. In Wisconsin's April 7 election, more than 40 percent of votes in the 7th Congressional District were cast in person. It's likely that a large share, if not a majority, of the special-election votes on May 12 will be cast in person too, despite safety concerns.

Tiffany has said he wants to help provide a "bridge" for Wisconsin businesses to move on from the economic devastation caused by stay-at-home measures and public concerns about the spread of the virus.

But it's apparent that the crisis has also created tensions in his campaign’s political message, which had leaned heavily on the economic growth in the Trump era that crashed nationwide amid the coronavirus response.

Tiffany put out a statement critical of Congress' first COVID-19 relief bill in March, saying its mandatory sick leave policy would harm small business. In a May 1 debate televised on WJFW-TV, he said he would have voted for all of the relief bills.

"When I was talking to people," Tiffany said on a virtual meeting with Trump campaign volunteers, "(2020) was going to be their best year ever, for many people. We need to restore that confidence. We need to get through this difficult time and then we can go back and return America to prosperity."

Editor's note: This is one of two profiles of candidates in the 7th Congressional District. To read WPR’s profile of Democratic candidate Tricia Zunker, click here.

An earlier version of the story misstated the location of the proposed Gogebic Taconite mine. This story has been updated.