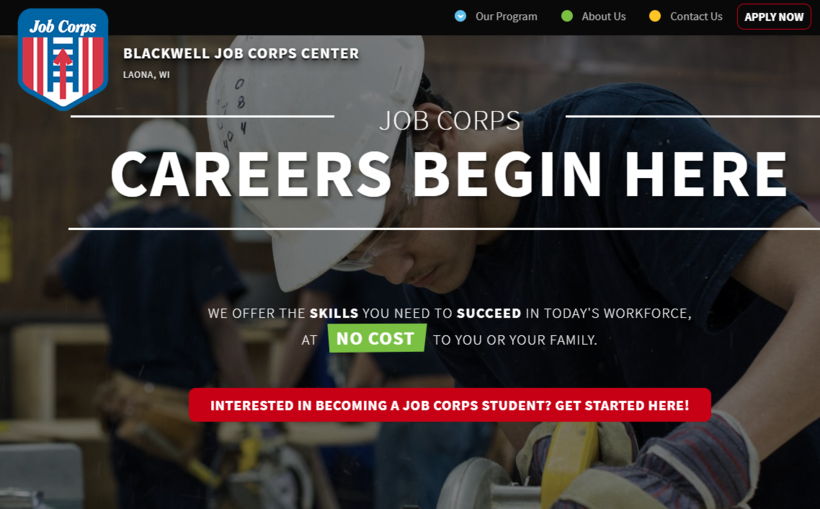 A screenshot from the website of the Blackwell Job Corps Center promotes its career training. The center will be closed under a new Trump administration plan.

A Wisconsin job training center that helps young people find work as carpenters, masons and certified nursing assistants will close by the end of the year.

The closure of the Blackwell Job Corps Center in the Northwoods town of Laona will mean the loss of dozens of local jobs and job training programs serving hundreds of disadvantaged youth. It comes as part of a Trump administration plan announced last week to cut 1,100 jobs in the Forest Service Job Corps Civilian Conservation Centers program.

The U.S. Department of Agriculture has overseen the New Deal-era program for decades. Under the new plan, it will be transferred to the Labor Department, and the majority of its work will be privatized, with training programs transferred to contractors. Nationwide, nine centers will be closed outright; Blackwell is one of these.

The program has been training young people in Wisconsin since 1964. It has capacity to train 160 students between the ages of 16 and 24 at a time in a range of trades including skilled labor and medical professions, said Eric Martinson, a former instructor there.

Martinson taught at Blackwell for 14 years, and has continued to help its students find jobs in his current role as a field coordinator with the United Brotherhood of Carpenters. He said teaching there was the most rewarding job he’s ever had.

Students in the program complete their high school diplomas as well as receiving training in "soft skills" and doing pre-apprentice work in a chosen trade. Martinson and others helped students find jobs after they completed the program. He said the Blackwell program has placed 786 Wisconsin students in quality jobs since the July 1 start of its 2014 fiscal year.

A current official with the program declined to comment, citing a federal gag order preventing employees from talking to the news media.

The proposal has received blowback from members of Congress of both parties.

Rep. Sean Duffy, R-Wausau, in a statement to WPR said "Northern Wisconsin needs all the tools at our disposal to stay competitive and continue the blue-collar recovery. I have written the Department of Labor to review their decision and ensure this center stays open."

The Department of Labor’s statement on the closures said the agency will "increase student access to Job Corps centers with the highest sustained performance outcomes."

But Duffy's letter to the U.S. Labor Secretary noted Blackwell ranked 25th for job placements out of more than 120 centers in the nation and questioned why it was one of nine centered slated to close.

A Labor Department spokesperson in a statement to WPR said the agency reviewed performance on multiple measures, including "outcome measurements, internal controls, capacity and proximity, costs, and ongoing needs of each CCC (Civilian Conservation Centers) against the overall Job Corps program."

The closure will also be felt by the Wisconsin companies that hire students who trained there, Martinson said, including major state manufacturers.

"This is going to be devastating to the state of Wisconsin," he said.