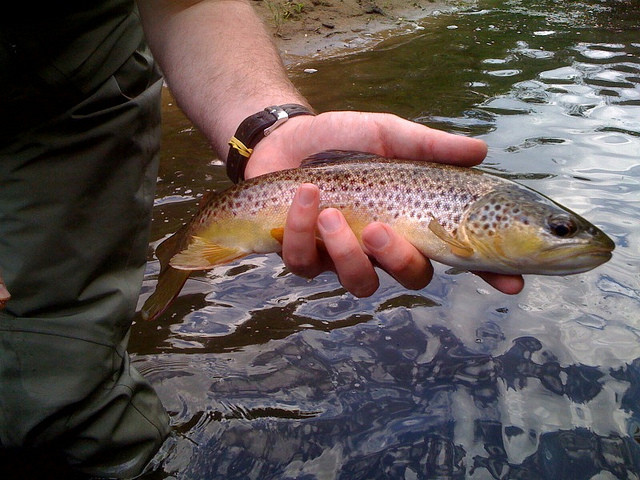 Above, a trout caught on the Kinnickinnic River. Photo: Adam Sharron (CC-BY-SA).

Trout Are Thriving In Wisconsin ... For Now

A century ago, conservation biologists believed there was little hope for Wisconsin to be a great fishing state.

Today, however, the state boasts over 13,000 miles of trout stream, and one expert says it's the “best of times” for trout fishing.

Steve Born, an emeritus professor of urban planning and environmental studies at the University of Wisconsin-Madison, said the good fortune of Wisconsin trout streams are the result of economic forces, conservation and stewardship legacies, and nonprofit agencies devoted to habitat enhancement and trout restoration.

“All these things have converged to make them the best of times, in terms of the mileage of trout streams in the state,” said Born, “It's gone from less than 10,000 miles in 1980 to over 13,000 miles of trout stream today.”

As a result, Wisconsin is making its mark as a destination for anglers and fly-fishers looking for a good catch.

“There's been a real interest and growth in recognizing that Wisconsin is not flyover water anymore, said Born. “These are some of the prime trout fishing waters in the U.S.”

Despite their abundance right now, trout are a sensitive species easily affected by changes to their habitat. Born warned that climate change will pose the biggest threat to the well-being of the state's trout streams.

“It turns out that since 1950, there's been more than a 1-degree (Fahrenheit) increase in temperatures in our Wisconsin trout streams,” he explained. “It doesn't sound like much, but that can be a fairly profound shift, particularly if a stream is near a thermal threshold in the summertime where a degree or two is the difference for a trout between life and death.”

Born warned that just a 1- or 2-degree difference in temperature would result in a substantial reduction in trout fisheries. He also says scientists predict that a 4- to 7-degree difference could almost be the death knell for Wisconsin's only native salmonid, the brook trout.

If that species goes, said Born, it will be “Iike the proverbial canary in the mine.”