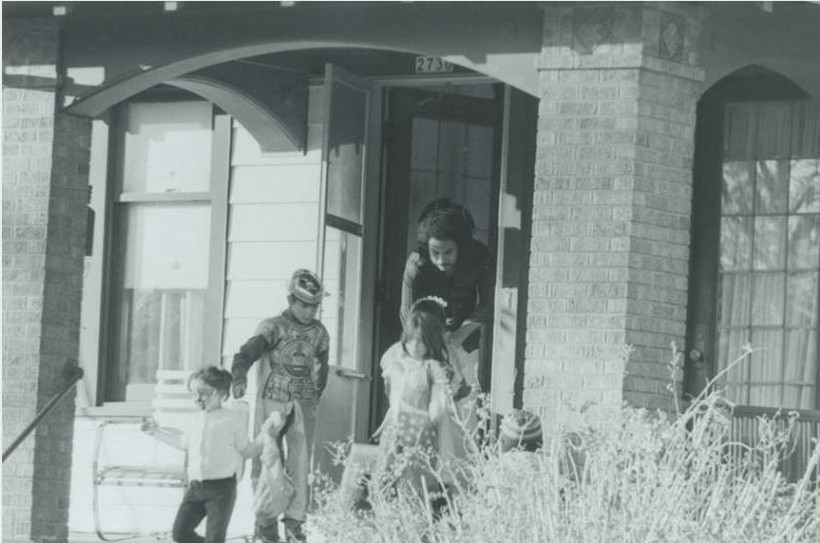 Children trick-or-treating in 1980 in Milwaukee, Wisconsin.

Trick-Or-Treating Is Newer Halloween Tradition In US

Every Halloween children in costumes go door to door begging for treats. It’s a tradition with a long history, even though it didn’t catch on in the United States until the 1920s and 1930s.

The Celts dressed up as evil spirits as a defense against the demons that were believed to be roaming the earth with the end of one year and the beginning of the next (they celebrated the New Year on Nov. 1). In costume, real demons would mistake you for one of their own and leave you alone.

This Celtic tradition morphed a few centuries later when the Catholic Church changed the pagan tradition into All Hallows Eve and All Souls' Day. Many of the Celtic traditions were adopted, including dressing up in costume, though the church encouraged people to dress as saints and angels.

A kind of trick-or-treating began in the Middle Ages with kids and sometimes poor adults dressing up in costumes and going door to door for food and money in exchange for songs and prayers.

The tradition didn’t spread to the U.S. with European migration though. Many people had Halloween parties in the 19th century featuring costumes, pumpkins and bobbing for apples. One party in Janesville in 1889 hosted by Miss Marion Bostwick included "the old pastimes of bobbing for apples, biting an apple hung by a string, pulling candy, roasting chestnuts, etc."

The Wisconsin State Journal detailed some Halloween traditions and lore in anticipation of the celebration in 1889. Apples figured prominently. "In apple seeds, two are said to signify an early wedding; three, a legacy; four, indicate a great wealth; five, a voyage across the sea; six, fame as a public speaker; seven, the gift most desired by the finder."

Another apple tradition involved removing the apple’s skin in one piece and then throwing it over your right shoulder. The peel will fall to the floor in the initial of the one you will marry. Another called for walking backward down the stairs at midnight with a lighted candle. The article noted that this wasn’t "likely to become very popular with our young people," which is probably for the best considering the dangers of stairs, darkness and an open flame.

Parties gave way to pranks as the Halloween celebration of choice in the late 19th and early 20th centuries, which may have led many communities to adopt trick-or-treating as a way to cut down on vandalism and violence in the 1930s.

In Oshkosh in 1888, the Daily Northwestern reported several smashed windows and several boys charged with disorderly conduct for "disturbing the big steps near the high school premises."

Sugar rationing during World War II forced many children to stop trick-or-treating, but it quickly became standard practice for children in the postwar baby boom.