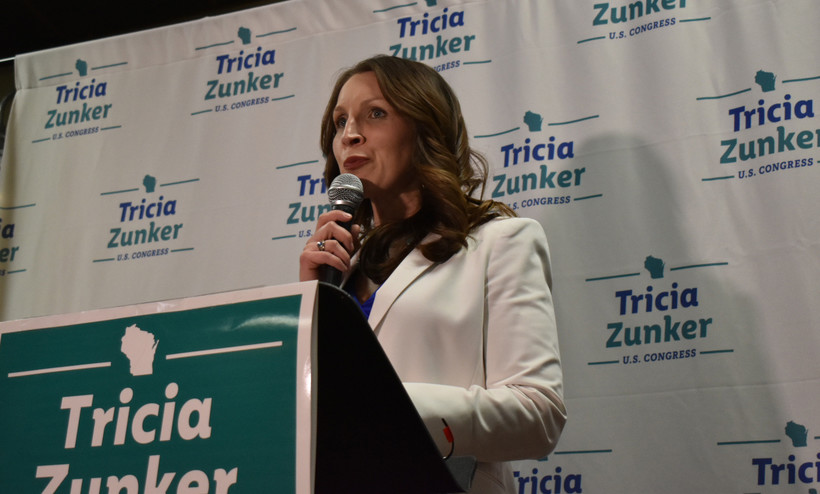 Tricia Zunker Would Make History With A Special Election Win. Can A Democrat Flip A Deep Red Congressional District?

In 1992, a Menominee woman named Ada Deer ran for Congress in Wisconsin's 2nd Congressional District. When she won her primary to become the Democratic Party’s nominee for the seat, she went before the TV cameras, held up her right hand and declared, "Me nominee." It was a statement of victory, a pun on her heritage and a parody of Native American pidgin English as caricatured in old Westerns, all in one.

Deer narrowly lost the general election in 1992. She went on to serve in the Clinton administration as assistant secretary of the interior. It would be 28 years before another Native American woman ran for Congress in Wisconsin.

On Tuesday, Deer, now 84, appeared at a virtual fundraiser for Tricia Zunker, the Democratic candidate in the 7th Congressional District's May 12 special election. 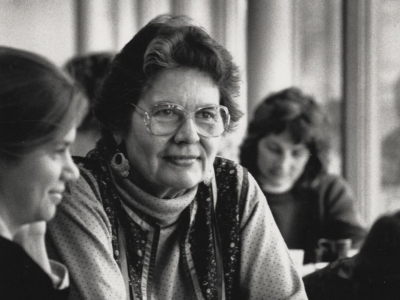 "I'm very enthusiastically supporting Tricia Zunker," Deer said. "She will be a wonderful conveyer and practitioner of our Wisconsin values."

Zunker, who is Ho-Chunk, is seeking the seat vacated when former U.S. Rep. Sean Duffy resigned in September. Before Duffy, the district was represented for nearly four decades by Democratic U.S. Rep. Dave Obey. But the sprawling, mostly rural district, which includes much of the Northwoods and the entire northwestern quarter of the state, has gone deep red since Obey's retirement in 2010. It voted for President Donald Trump by 20 points in 2016.

For the special election, Democrats are hoping to tap into the district's Democratic roots — and lay the organizing groundwork in rural Wisconsin for November's presidential race.

The historic nature of Zunker's candidacy — she would be the first Native American woman elected to Congress from Wisconsin, and only the third in the nation — is part of what has attracted national attention to the race. She's collected the endorsements of U.S. senators and former presidential candidates Elizabeth Warren, Cory Booker and Kamala Harris. She has received shout-outs on social media from left-leaning celebrities such as Julianne Moore and Bradley Whitford.

She's also managed to raise more money for her campaign in six months than the last two Democrats who ran in the district combined, though she still trails her opponent, Republican state Sen. Tom Tiffany, by more than $900,000 in overall fundraising.

But with Democrats nationwide intensely interested in which way Wisconsin will swing and as a global pandemic upends daily life for many, Zunker is working to make history not just as a nominee, but as an elected congresswoman.

Zunker was born and raised in Wausau, where today she serves as president of the Wausau School Board. She is Ho-Chunk on her father's side. On her mother's side are generations of dairy farmers in central Wisconsin. She is animated by concern for workers, small businesses and family farms, she said, and the protection of the environment.

In an interview with WPR, she said her upbringing taught her the value of hard work, and the importance of having politicians on your side.

"I understand struggle and I also understand, if you don't have people in certain positions that are arguing for you, that are trying to enact laws that will be beneficial for you, well, that's problematic," she said. 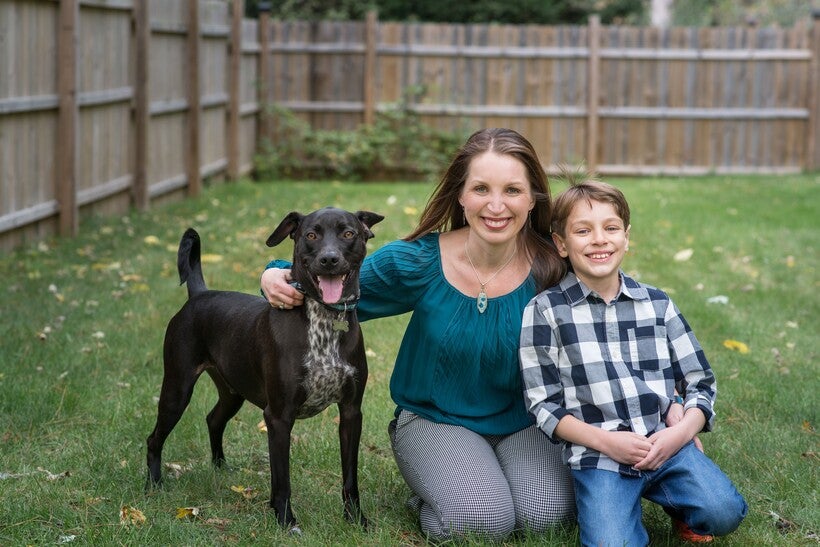 Tricia Zunker lives in Wausau with her son Timothy and their rescue dog, Diesel. Photo courtesy of Tricia Zunker

Zunker became a lawyer and law professor. In 2013, she was elected to the Ho-Chunk Supreme Court, where she continues to serve as a justice.

"I am a first-generation college graduate, and I know what a difference it makes," she said. "My Ho-Chunk grandma, one thing she told me is that education is the one thing they can never take away from you."

At campaign events, Zunker speaks about the importance of representation. She praised Ada Deer for the "path you have paved for indigenous women like me," and added that "I know I have an obligation to extend my hand back to all the indigenous girls that are looking up to us."

In fact, Zunker would also be the first woman ever elected to represent the 7th District. She frequently says she would never ask for someone’s vote because she's a woman. She asks for people's votes, she says, because she’s a qualified woman.

As election day gets closer, Tiffany and conservative groups have attacked Zunker on culturally conservative issues including immigration, abortion and gun rights. In a Monday debate, Tiffany said universal background checks for gun purchases, which Zunker supports and which have large majority support in public opinion polls, "is just code for confiscations."

They're familiar campaign attacks in a conservative district. But the COVID-19 pandemic has the potential to change which issues are most salient to voters. In March, Tiffany was critical of Congress's first economic relief bill, saying its mandatory sick leave policy would harm small businesses. In a new campaign ad that is running in Wausau, Superior and St. Croix County, Zunker's campaign attacks Tiffany on this and on his health care stances.

Tiffany "opposed the law that protects patients with pre-existing conditions, who are most at risk of COVID-19," the ad states, referring to the Affordable Care Act, "and he spoke against the bipartisan bill signed by President Trump to help small businesses hit hard by the pandemic."

The pandemic has put an end to in-person campaigning. Zunker spends her days on the phone and on Zoom videoconferencing calls. She’s called for the May 12 special election to be conducted entirely by mail as a precaution against transmission of the virus, but few other elected officials have taken up the call. While Gov. Tony Evers unsuccessfully pushed to postpone Wisconsin's April 7 spring primary election over safety concerns, in a press conference in April, Evers' legal counsel said there were significant differences between the statewide race and the special election. 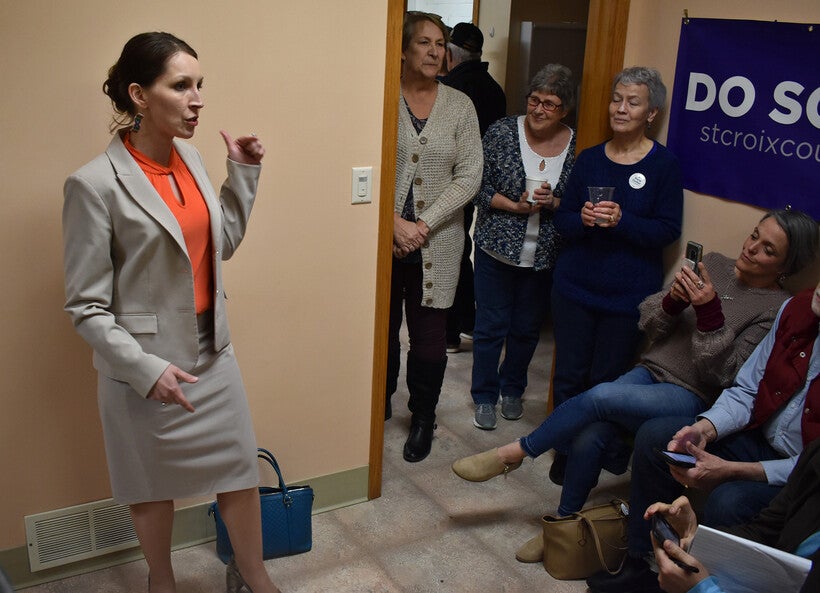 In an interview, Zunker called Evers' decision not to push for all-mail-in voting for the special election "disappointing" and said "no one should have to risk their lives to exercise their right to vote." Her campaign is promoting absentee voting.

But in April, more than 40 percent of those who voted in the 7th Congressional District did so in-person, raising the possibility that election day could lead to the spread of COVID-19 infections in rural areas that have mostly seen fewer cases than the state's cities.

"We may not know what that number is going to translate to," Zunker said, "but we know that the risk is there." 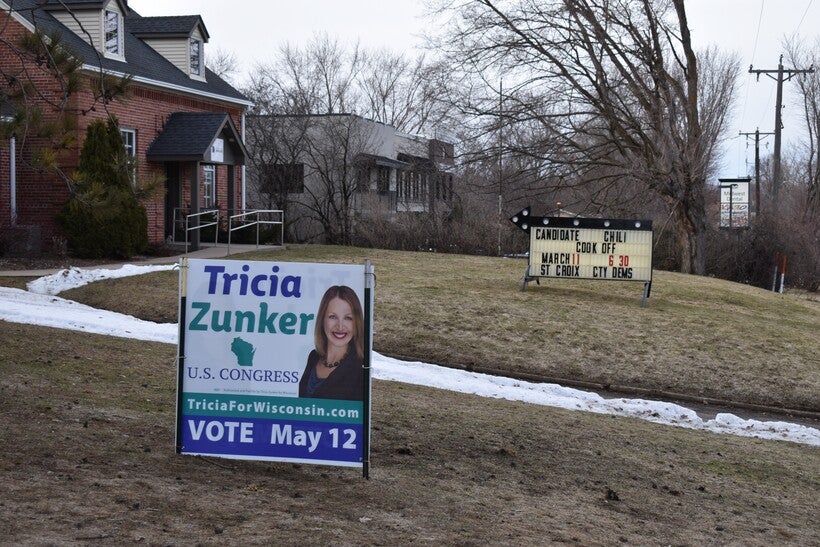 A Zunker campaign sign is displayed outside the headquarters of the St. Croix County Democratic Party in Baldwin, Wis., March 11, 2011. Rob Mentzer/WPR

Wisconsin's spring election was widely seen as a triumph of online organizing by the state’s Democratic Party, who used virtual means and absentee balloting to get out the vote for their preferred state Supreme Court candidate. (Democrat-backed Judge Jill Karofsky defeated GOP-backed Justice Daniel Kelly by a large margin statewide, though Kelly won more votes in the 7th Congressional District.) Activists are already holding phone-bank events and texting potential voters about their plans for the special election.

"There's a deep vein of progressivism that runs through the north of Wisconsin," said Ben Wikler, chair of the Democratic Party of Wisconsin, in an interview after Duffy announced his resignation. And the seat can be won, he said.

"Often special elections favor the party with the higher voter intensity," Wikler said. "And I think Democrats are really fired up."

Seeing 'Yourself' Represented For the First Time

In January 2019, U.S. Reps. Sharice Davids of Kansas and Deb Haaland of New Mexico became the first Native American women ever to serve in Congress. The congresswomen, both Democrats, have endorsed Zunker's candidacy. In the virtual event with Ada Deer, Zunker reflected on the importance of that moment.

Editor's note: This is one of two profiles of candidates in the 7th Congressional District. To read WPR’s profile of GOP candidate Tom Tiffany, click here.