Rich Skerbitz, who was born a triple amputee, believes voting is one of the most important duties people have as citizens. For the 45-year-old Oulu resident, there are many critical issues in this election for people like him who are living with disabilities.

"Some of the examples that affect people with disabilities are public transportation, personal care assistants and accessibility in general," Skerbitz said.

Superior’s John Nousaine, 64, had his leg amputated after he was injured in a construction accident when he was 24. He remembers waking up in the hospital wondering what life would be like as a person living with a disability.

"A year later, that was not the biggest concern I had in my life," said Nousaine. 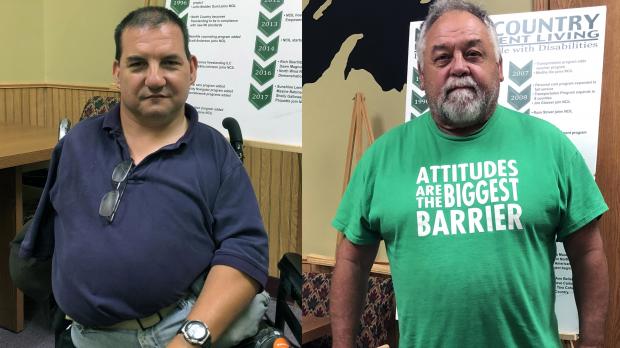 Rich Skerbitz, left, of Oulu and John Nousaine of Superior.

Now, he and Skerbitz work for North Country Independent Living in Superior, which seeks to empower people with disabilities.

The organization covers an eight-county service area in northern Wisconsin, including Ashland, Bayfield and Douglas counties. Nousaine said transportation has been one of the top issues for the people they serve, and it’s top of the list of issues he’s concerned about this election season.

"Transportation in northwestern Wisconsin is really a tough nut to crack," Nousaine said. "There’s very few places that have public transportation. Superior is one that does have mainline and paratransit … Anybody else in Douglas County is going to have a really hard time finding a ride."

"All the public kind of transportation we can get will benefit all our citizens, but in particular people with disabilities," said Nousaine.

"All the public kind of transportation we can get will benefit all our citizens, but in particular people with disabilities," he said.

Trego’s Steve Carlson, 62, also works for North Country Independent Living. For him, health care is one of the most important issues this election season. He’d like to see Wisconsin’s governor accept federal money to expand Medicaid services in the state. 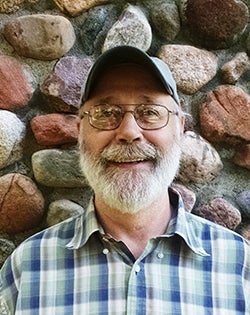 Steve Carlson of Trego. Courtesy of the subject.

"That’s been a big stumbling block here in Wisconsin," Carlson said. "It has not only affected people with disabilities in terms of an inability to expand a program crucial to keeping folks with disabilities independent in their communities, but the lack of the expansion has contributed to higher premiums for people buying policies on the open exchange."

Despite the challenges that remain, Nousaine said there’s been more awareness of disability issues since the Americans with Disabilities Act was passed in 1990.

"It was a wakeup call to Americans, in my opinion, that we have to consider the concerns of people with disabilities," Nousaine said. "Before that, it was really tough to get anybody to really care, and I’m the same way. It’s human nature. I was not affected by any disability stuff until it happened to me."

Disabilities can often be viewed negatively or as the worst possible thing that could happen to a person, said Nousaine. He believes that perspective is the root of barriers for people with disabilities and drives discrimination.