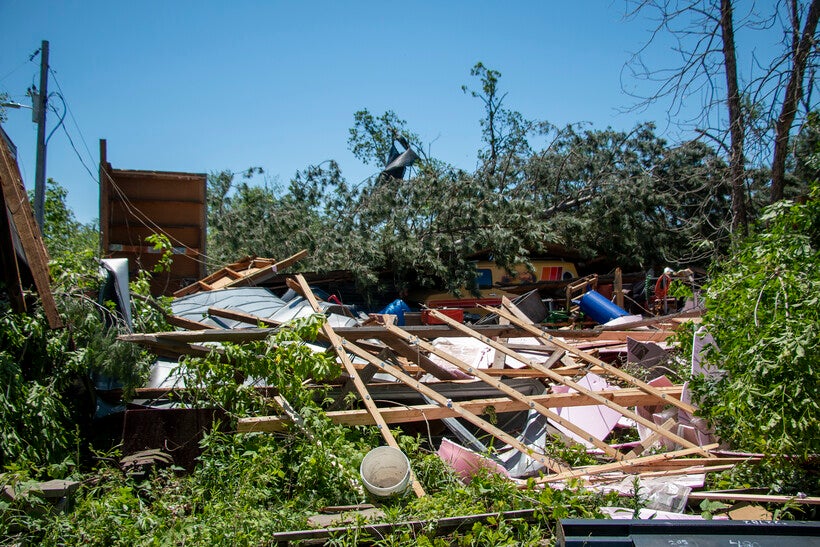 Harry Myer wasn't home when a tornado swept through his 34-acre rural property in Monroe County on Wednesday. Of the damage he said: "This is the worst I've ever seen." Rich Kremer/WPR

At least one tornado ripped across central Wisconsin Wednesday, cutting power and damaging structures outside Tomah in Oakdale and Wyeville.

The Monroe County Sheriff's Office said the tornado traveled northeast from Highway 131 and County Highway A for about 15 miles before leaving Monroe County north of Shennington shortly after 4 p.m. It then moved into northern Juneau County before dissipating.

The storm took down several trees, power lines and barns, according to the sheriff's office. Interstate 90 was shut down after multiple semis were blown over.

Monroe County resident Harry Myer said he was grateful no one was home when the tornado tore through, downing a large pine tree that fell directly onto his house where he lives with his wife and daughter. 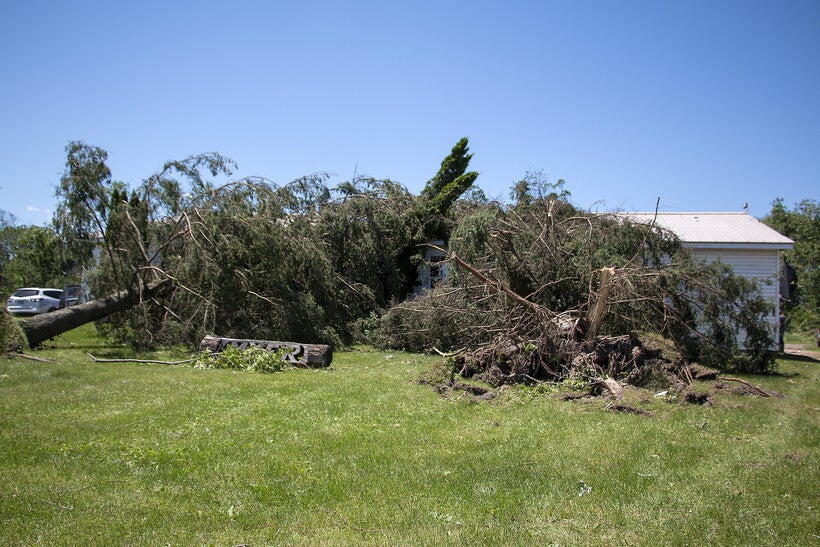 A tornado downed a large pine tree that fell directly onto the rural Monroe County home of Harry Myer. Damage was seen across the state from a spate of storms that in some locations produced hail, heavy rain and tornadoes. Rich Kremer/WPR

"It's just devastating, the damage," he said. "It's unreal."

A crane was on its way to lift the massive tree off the house, he said Thursday afternoon. And dozens of neighbors had already been out that morning to help him cut and remove other trees and debris blocking his driveway and littering his property.

The damage to the trees on his rural property was nearly total.

"I've got 34 acres," Myer said. "I think everything's down back there. (In the front yard), there must have been a dozen of them, these great big pines. Everything that didn't go down is busted off."

The storm also destroyed a large storage shed and damaged multiple vehicles Myer had on his rural property. A carport over one classic car was lifted and blown into the river. 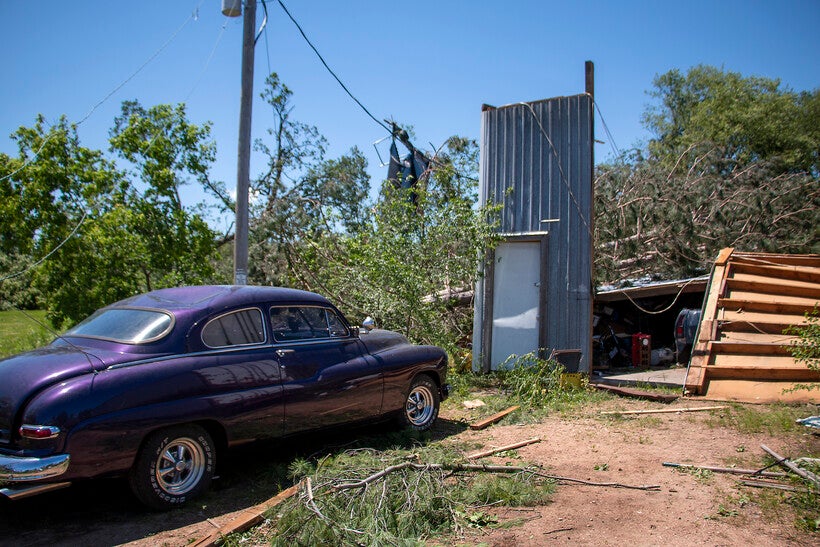 The tornado that tore through Monroe County resident Harry Myer's property lifted a carport covering one of his classic cars and blew it into the river. Rich Kremer/WPR

"This is the worst I've ever seen," Myer said of the storm damage.

Elissa Smith was also surveying the damage Thursday outside her rural Tomah home, where she lives with her two children and boyfriend.

"It just went real fast — the wind — you couldn't even see over here. And then we heard a glass break, the main window broke in my room, and then we all went into our closet by the crawlspace," Smith said. "But I didn't hear anything. It was all quiet."

After the storm, Smith went outside to find downed trees everywhere. 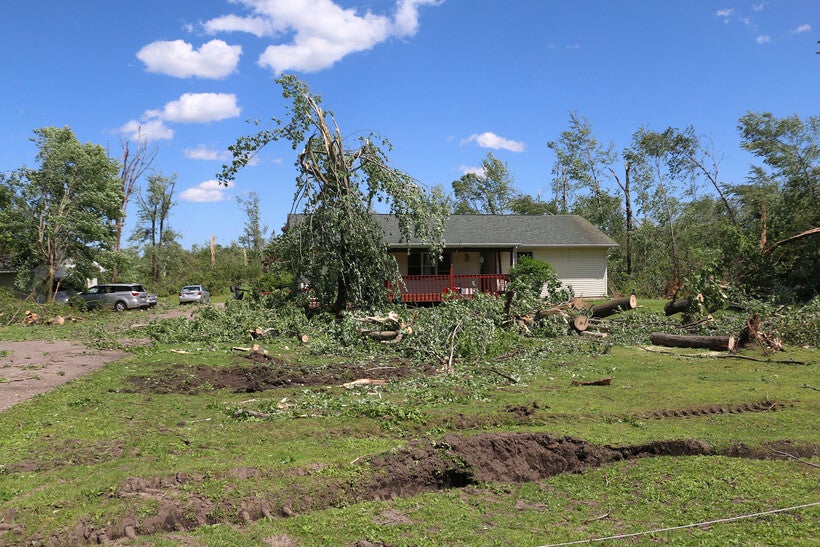 But other than a broken window and a missing screen door, her home was somehow unharmed.

A massive cleanup effort was underway Thursday including local power companies and members of the Ho-Chunk Nation. Smith and her family were handing out water and Gatorade to those helping the effort.

No injuries have been reported from the tornado and the severe storm system that ripped across the state on Wednesday night.

The National Weather Service in La Crosse has damage survey crews in the Mauston area Thursday, where strong winds and storm damage were reported. La Crosse Meteorologist Kate Abbott said crews are working to determine if another tornado, or multiple tornadoes, went through Mauston as well.

"It was very disorganized when it got going. There wasn't a whole lot of structure to the storms, but they quickly began to develop as they moved into west Central Wisconsin," Abbott said. "That's where we saw some tornadoes start to spin up with those storms. The storms ended up forming a large line of storms that marched east across Wisconsin, producing mostly wind damage, be it from wind itself or tornadoes."

The National Weather Service told The Associated Press that debris lofted by the tornado could be seen on radar.

"As our friends and neighbors woke up this morning, many found their homes, properties and belongings damaged or destroyed," Streckenbach said in a statement. "Our goal is to ensure that ... their lives can return to normal."

After a week of strong storms, Abbott said Wisconsinites can except calmer weather over the weekend.

"Now, (we) expect a quieter period for the next few days here with mostly seasonable weather, clear skies," she said.