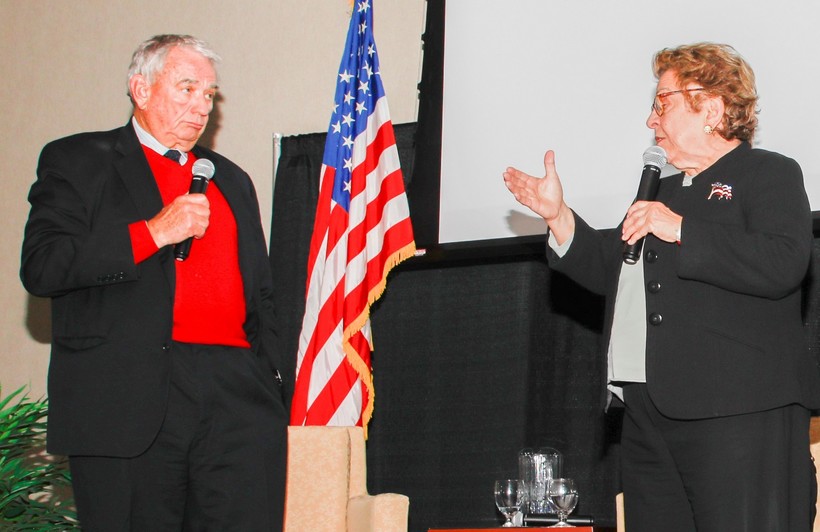 Former Republican Gov. Tommy Thompson and former UW-Madison Chancellor Donna Shalala, a Democrat, speak at an appearance in Wausau sponsored by the Wisconsin Institute for Public Policy and Service. Photo by Paul Muggli

Both also criticized President Donald Trump’s rhetoric during a Wisconsin Public Radio talk show prior to a joint appearance in Wausau sponsored by the Wisconsin Institute for Public Policy and Service.

"His policies are good I think in a lot of areas," Thompson said. "If he would only be a little more willing to use diplomacy instead of punching you in the nose. He is somewhat of a bully."

Shalala agreed, saying, "We can never predict what this president is going to say or do from one day to another ... watching Washington is embarrassing these days."

"It reminds me of the election in 1970 when we had 55 members in the state Assembly and we went down to 33 because we lost touch with the people," Thompson said.

Shalala hopes to capitalize on a Democratic wave. She is running for Congress in the Miami, Florida area.

"Public service is in my blood and it's not out of me yet, so I decided that I'm going to run," Shalala said. "As I said to the people of Miami, I'm not a rookie, and I'm not going to go to Washington as a rookie."

Thompson and Shalala are two of the most significant political figures to emerge from the Badger State.

Shalala served as U.S. secretary of Health and Human Services under former President Bill Clinton, and later served as president of Miami University and president of the Clinton Foundation.

In the 1990s, when Thompson was governor and Shalala was chancellor, they put aside their partisan differences to work together on education issues. They said politicians today should follow that example.

"Gov. Thompson and I worked together in an era in which it didn't matter whether you were a Republican or a Democrat," Shalala said. "We both had the same goal, which was to make the University of Wisconsin a great university."

Both called for increased support for the UW System.

"The states used to take great pride in their great universities here in Wisconsin and other places. So I consider this a national tragedy, not just in Wisconsin but across the country," she said.

Thompson won the gubernatorial election in 1994 with 67 percent of the vote by appealing to Democrats and independents as well as Republicans.

"The philosophy now is all I want is 50 percent plus one vote. That's a badge of honor that I just got the conservative base or I just got the liberal base and we were able to win and I don't have to worry about those other people." Thompson said. "I wanted every vote."

Shalala warned Democrats not to be complacent, or take the current political climate for granted.

"There clearly is unhappiness with the current leadership and it's being reflected across the country in local elections as much as it is in national election," she said. "But you know, politics can change on a dime."