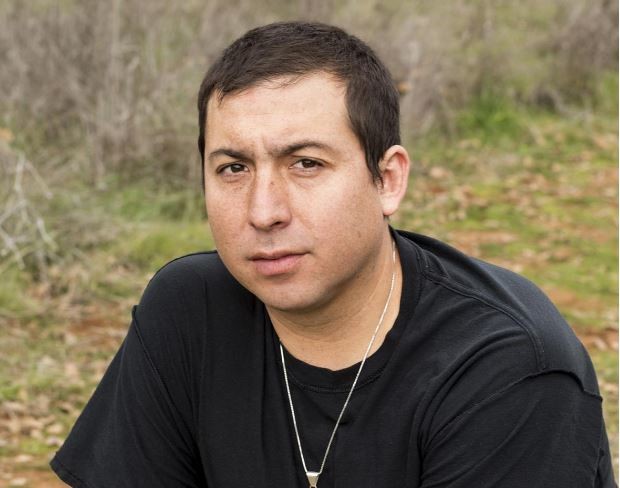 Tommy Orange's 'There There' Expands Our Understanding Of Native Americans

Orange Is Member Of Cheyenne, Arapaho Tribes of Oklahoma
By Doug Gordon
Share:

Tommy Orange is an enrolled member of the Cheyenne and Arapaho tribes of Oklahoma.  He's also the author of one of the most critically-acclaimed novels of 2018, "There There."  Orange's debut novel has shown up on several "Best of 2018" lists.

As Orange told WPR's "BETA," he remembers exactly where he was when he came up with the idea for "There There" at the end of 2010.

"I had just found out I was going to be a father. I was driving down to L.A. to go see a show.  And on the drive, the idea just popped right into my head. I’d been working in the urban Indian community in Oakland for many years and I knew I wanted to write a novel. At that moment, the idea to have a story about urban Indians where all their lives converge at a shooting at a powwow at the Oakland Coliseum. That single sort of container for the novel is what I thought of in that single moment," he said.

"There There" is a polyphonic novel featuring the voices of 12 working-class Native Americans living in Oakland, California. The characters range in age from young to old.

"I just like those kinds of novels," Orange explained. "I like shifting perspectives, I think it's true to life. I think we get a lot of voices and we have to try to make sense of it. And it all does interconnect somehow. There’s also kind of like a monolithic version of what native people are supposed to look like and be like — you know, stoic or sad or drunk or dumb.  So, to explore a dynamic range of voices for people that normally have either no voice or it's a false voice or it's a stereotype, it seemed interesting and a way to expand the range of the way we're thought of."

Orange grew up in Oakland.

"It was in some ways an idyllic childhood where I had a set of friends and went to school and maybe one other kid was native. In a sense, we knew that there weren't many native kids around. But we grew up with my dad who, his first language was Cheyenne, and he grew up with his great-grandparents in a way that native people don't live like anymore. So, we grew up with him so it was a very urban Oakland experience. But the heaviest native influence or what made us feel that way was our dad and speaking in Cheyenne. He didn't teach us, it was kind of more of a time of assimilation. But we were very aware of it. And there were certain stories that he told and made sure we knew about. And I didn't actually know there was an urban Indian community until I started working in it, in my 20s."

Orange coined the word "Indianing," which he uses to great effect in his novel.

"I think particularly with native people, if somebody finds out you’re native, one of the first things that they say, or in my experience, and this happened on the tour recently, they ask me if I’m native and I say ‘Yes.’ And then the follow-up is always ‘Well, how much?’ People want to know what makes you Indian, whether it's blood or what do you do, the verb of ‘Indianing.’  In college, I wrote a paper called ‘Chekhov’s Indian.’ So, if the gun appears in the first act, it's going to go off by the third."

"Basically, talking about how to write Indian without doing the typically Indian stuff. If you introduce an Indian, do they have to do something Indian? And this is all based on stereotype and authenticity. And the stick we have to measure ourselves by is this old version of what being Indian is. And we need to expand the conversation about how many different things it can mean.”