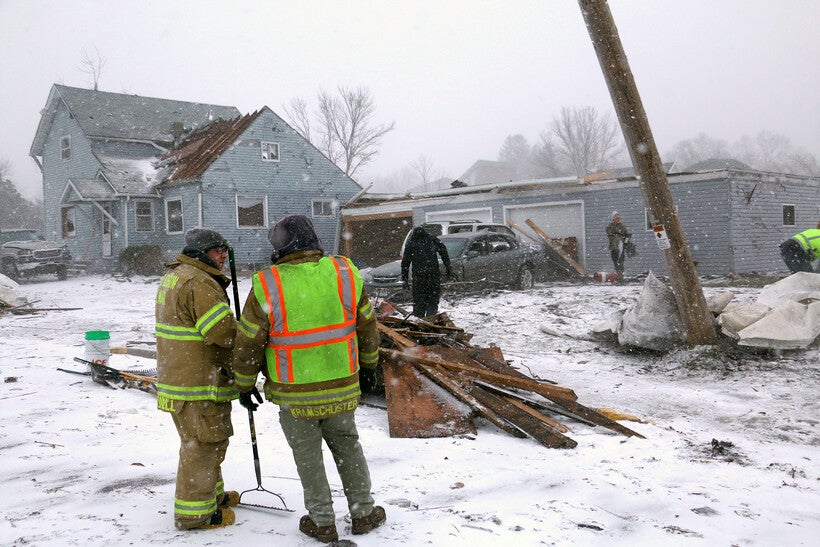 More than 30,000 Wisconsin residents are still without power Friday afternoon, more than a day after severe thunderstorms, tornadoes and sustained wind gusts caused by an unprecedented weather system hit the state.

Brendan Conway, a spokesperson for WE Energies and Wisconsin Public Service, said the utilities estimate around 280,000 customers have lost power at some point since Wednesday.

Conway said crews have been working nonstop and expect around 98 percent of WE Energies customers to have power restored by 12 a.m. Saturday. He said WPS expects power to be restored to about 90 percent of customers by that time as well.

"It stayed so windy through the first part of the day yesterday. As we were cleaning up outages, we were getting more in because the winds were just continuing to knock down branches, knock down trees and caused damage," Conway said.

Because Wednesday's severe weather was so widespread across the Midwest, mutual aid from utility companies in other states wasn't an option, Conway said.

"It caused such extensive damage that there just were not a lot of other resources to pull from the Midwest," Conway said. "And even extra resources that would have been available were already responding to those tornadoes from a few weeks ago in Kentucky and some of the Plains states."

He said utility crews from Indiana were expected to arrive Friday to help restore power.

With cold temperatures following the storm, people without power should plan to stay with family or friends with power, Conway said.

During and after the storms hit Wisconsin, nearly 40,000 Xcel Energy customers in the state were without power, said spokesperson Chris Ouellette. Power line crews were able to restore power to about 25,000 individuals within 16 hours, Ouellette said. Work was still ongoing as of 2 p.m. Friday, Ouellette said.

"We currently have just about 3,000 customers that are still without power," said Ouellette. "Our goal is to have those folks back on by tonight."

The weather service office in the Twin Cities confirmed damage in the city of Stanley, near Chippewa Falls, was from a tornado. A tweet from the office Friday afternoon said it was an EF2 with a maximum wind speed of 120 miles per hour.

The office also said Friday an EF0 tornado was confirmed in rural, eastern Eau Claire County between the village of Fairchild and city of Augusta.

Severe winds followed the line of severe thunderstorms that swept across the state overnight Wednesday.

Several records were also set for high temperatures in December, with Green Bay reporting 65 degrees prior to the storm front reaching the area.