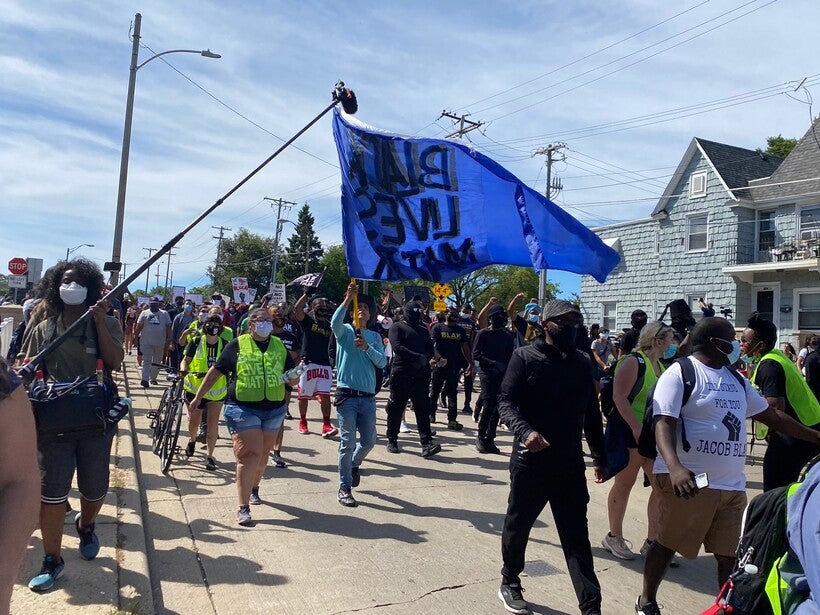 Over 1,000 people gathered in Kenosha for a #JusticeForJacobBlake march and rally on Aug. 29, 2020, led by Jacob Blake's family. Corrine Hess/WPR

Thousands Gather With Blake Family To March For Justice

Jacob Blake Sr.: My Son Asked Why They Shot Him So Many Times
By Corrinne Hess
Share:

The family of Jacob Blake marched with thousands of community leaders and elected officials Saturday in Kenosha to demand justice nearly a week after he was shot seven times by a Kenosha police officer.

"What gave them the right to attempted murder on my son?" Jacob Blake Sr. said. "My son, the other day in the hospital, he grabbed my hand, and he said, 'Daddy, I love you. Why did they shoot me so many times?'"

Blake Sr. said seeing his son critically injured has been devastating. Until Friday, the younger Blake was handcuffed to his hospital bed because he was wanted by an outside agency for a previous crime. He is no longer in custody under a federal arrest warrant after posting bond Friday morning, according to his attorney.

"To look at your baby, paralyzed from the waste down, shacked, shacked. Where was my son going? They already put him in the bed, what was the shackle for?" Blake Sr. said. 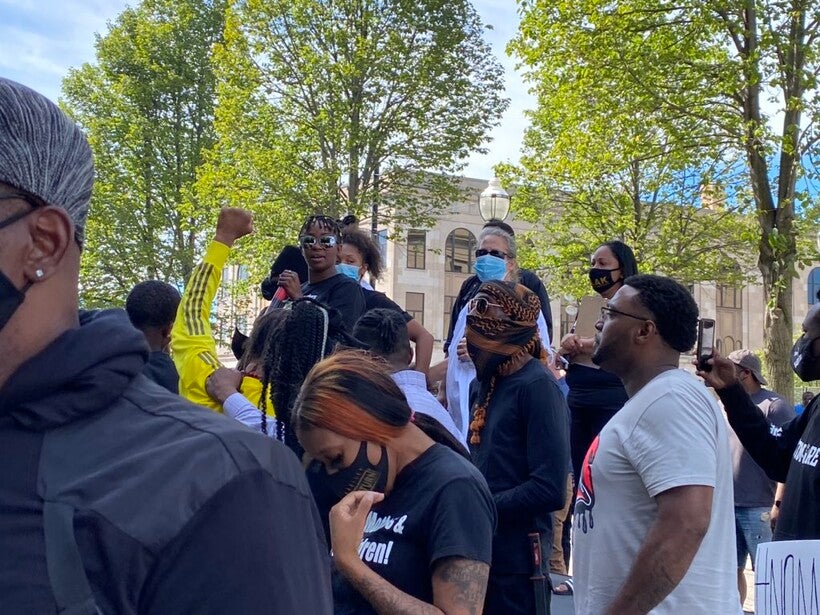 Barnes reminded the crowd to vote, but said Nov. 3 is a milestone, not the end of the fight for justice.

"I look at the Blake family and I see resilience, beauty, hope and I see strength. These are some of the strongest people I have ever seen in my ever life, but that strength is because of the years, the generations, the centuries of pain and injustice we have gone through," Barnes said. "That's not a way to build strength, but we've done it anyway. We've made it through some of the toughest times, and we're still here today."

Tanya McLean, a friend of the Blake family who helped organize the event, said the community is heartbroken and steadfast in their demand for justice.

"We’re here to demand an end to police violence and systemic racism in Kenosha," McLean said. "No more piecemeal reforms and useless committees. No more Band-Aid solutions over the bullet wounds. The time for transformational change is now."

The police officers involved in the stop that ended with the shooting of Jacob Blake in Kenosha attempted to use tasers to stop him from walking away, but they unsuccessful, the Wisconsin Department of Justice said in a statement.

Blake told police he was in possession of a knife. It's unclear whether officers thought the knife was on Blake's person when he was shot.

The officer who shot Blake in the back seven times was Officer Rusten Sheskey, a seven-year veteran of the Kenosha Police Department.

The union representing police officers in Kenosha told NPR that Blake was armed with a knife and "forcefully fought" with the officers who tried to arrest him, putting one of them in a headlock.

A 20-second video of Blake's shooting, filmed by a bystander, has been viewed millions of times on social media. But its short duration fails to show the preceding interactions between police and Blake.

Protesters have gathered in Kenosha since Monday to decry the shooting. Businesses across the city have been burned.

On Tuesday, Kyle Rittenhouse, 17, of Antioch, Illinois, allegedly killed two protesters and injured a third man. He has been charged with six counts including first-degree reckless homicide.