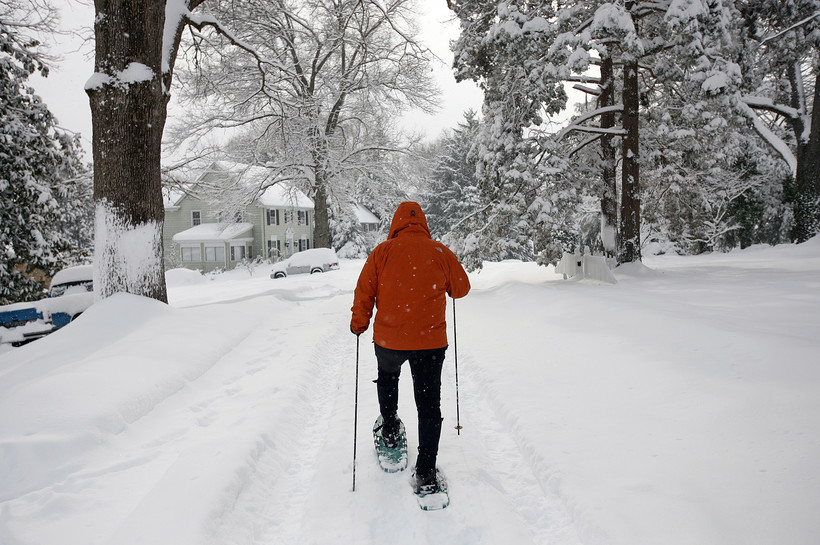 Thin ice has affected some upcoming Wisconsin events, but it doesn't mean the winter recreation season is a bust, one tourism official said. Norm Shafer/AP Photo

DNR: Ice Is Variable On Lake Winnebago, But Sturgeon Spearing Season Is On As Scheduled
By Megan Hart
Share:

Each winter, hundreds of cyclists flock to Lake Winnebago for an 18-mile ride across the body of water. This year, however, inconsistent ice has led event organizers to plan an alternate route that won’t traverse the lake.

It’s not the only event that’s been affected this year due to poor ice conditions. In St. Germain, a popular, annual snowmobile competition was called off for this weekend. Loop Around the Lake, a 5K on Lake Minocqua for snowshoers, cross-country skiers and hikers, has also been canceled.

Events like Loop Around the Lake provide a nice economic boost for Northwoods communities, said Let’s Minocqua Executive Director Krystal Westfahl, but the winter tourism season doesn’t depend on them.

Heavy snowfall in the area has insulated the ice, leading to less-than-ideal conditions in places, Westfahl said. But visitors to Minocqua can still participate in all their favorite winter activities, she added.

"With Loop Around the Lake in particular, that event and others like it draw a lot of people and equipment out on the ice," Westfahl said. "The ice is safe for regular general snowmobile travel, but when you get 800 to 1,000 people standing on one area on the ice, it becomes unsafe with these conditions that we're seeing."

The area’s snowmobile, snowshoeing, cross-country skiing and fat-tire biking trails are all open, Westfahl said. It’s been a strong tourism season so far, she added.

"For us in the Northwoods, we are an optimistic, hearty sort and so we just keep on keeping on," she said. "I think the travelers that come here consistently understand that, just because there's an event that has (been) canceled, doesn't mean the season is now done."

Back on Lake Winnebago, the 2020 sturgeon spearing season will open as scheduled on Feb. 8. According to the Wisconsin Department of Natural Resources, ice conditions on the lake are variable. Heavy wind and snow have contributed to the inconsistency of the ice, said Glenn Curran, president and founder of Battle on Bago. The long-term forecast, however, looks favorable, he said.

The annual ice fishing tournament, which has raised more than $1.3 million for Wisconsin charities, is scheduled for Feb. 21-22. It attracts 10,000 anglers from across the United States and Canada. Curran said it’s also an important economic driver for area.

Battle on Bago has been canceled once in its 13-year history. In 2016, high temperatures in advanced of the event caused organizers to call it off. Curran said they’re working with a local fishing club to monitor conditions in the coming weeks.

"If we can get some single digit lows at night, that will lock it up pretty solid," he said.