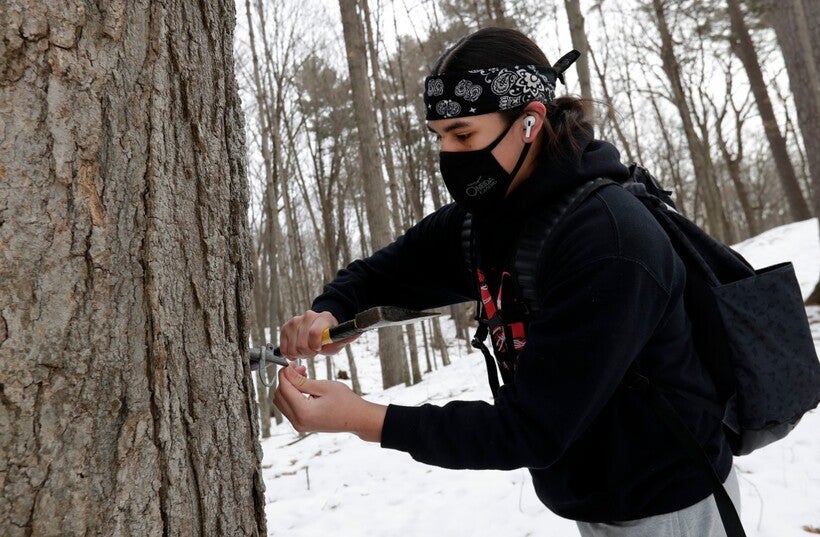 Oneida Nation High School sophomore Dustin Elm taps a maple tree to collect sap. A push by tribal and federal officials to encourage participation in the 2020 U.S. census resulted in what tribes are hailing as the most accurate picture to date of the size and diversity of people with Indigenous ancestry in Wisconsin. Sarah Kloepping/Green Bay Press-Gazette

The Oneida Nation had the fourth-best census response rate of the more than 500 Indigenous nations with reservations in the US
By Frank Vaisvilas | Green Bay Press-Gazette
Share:

Coming from mixed ancestries, Brenda John always struggled with how to accurately identify herself when filling out census questions.

"I’m Oneida, I’m also part non-Native," she said. "I don’t have the option to say both without going into a generic mixed-race bucket that can no longer be used for important things like grants for our community. People also don’t understand the difference around the Hispanic questions and, again, the question of what to do if you are both Hispanic and Black, or Hispanic and Native, can result in not getting counted correctly."

John, who lives on the Oneida Reservation, said she understands the importance of the census to her tribe and also to Wise Women Gathering Place, the nonprofit where she works, because those figures are used in determining federal funding.

A push by tribal and federal officials to encourage participation in the 2020 U.S. census resulted in what tribes are hailing as the most accurate picture to date of the size and diversity of people with Indigenous ancestry in Wisconsin.

The percentage of people responding that they were American Indian or Alaska Native alone, with no other race, increased by only about 10 percent in Wisconsin. 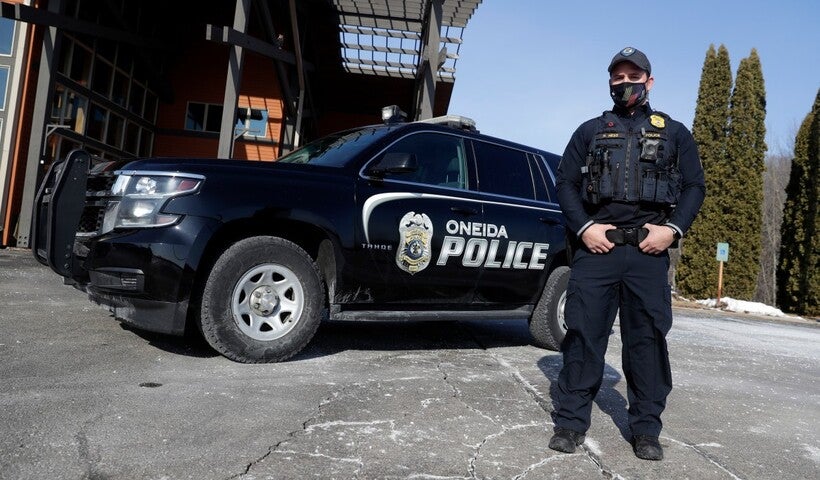 Oneida Police Sgt. Nate Ness is pictured outside the police department in Hobart, Wisconsin. The police department is among the Oneida Tribe of Wisconsin Indian agencies that receive federal funding based on the population of the reservation, one reason the tribe pushed hard to get as full a count as possible in the 2020 U.S. census. Sarah Kloepping/Green Bay Press-Gazette

Tribal officials across the United States have long argued Indigenous people have been undercounted by the federal government, which finally led to a change in data collection for the 2020 census. Those changes included more options and clearer instructions for reporting ancestry of multiple races, resulting in large gains not just for Indigenous people, but for other racial groups as well.

Melissa Nuthals, of the Oneida Nation’s self-governance office, said the majority of American Indians have other races in their makeup and that diversity had not been reflected in past census tallies. She said less than 7 percent of Oneida citizens are full-blooded Oneida with no other race.

"They are improving their methods," Nuthals said of the census data collection.

The 2020 question about multiple races more clearly directs the respondent to add their full racial ancestry as well as the name of their tribe. Detailed results from those questions have not yet been released by the Census Bureau.

John said she initially put off filling out the census form because she felt anxious about intrusive questions and wondered if she would be correctly identified and counted. Once she started, those fears slipped away.

"The process was so easy compared to other years," she said. "I finally said to myself 'I’m just going to check out this (online) link' and hoped it wouldn’t be too overwhelming, and it was easy."

On the Oneida Reservation, about 65,000 acres starting on the west side of Green Bay and continuing into Outagamie County, the census has always reported a smaller population than the Oneida government’s own count.

Besides a change in questions and better tabulations by the federal government, Nuthals said tribal outreach also helped improve the population reporting.

She said many Indigenous in the past wouldn’t fill out the census forms because of distrust of the federal government and concerns about privacy. 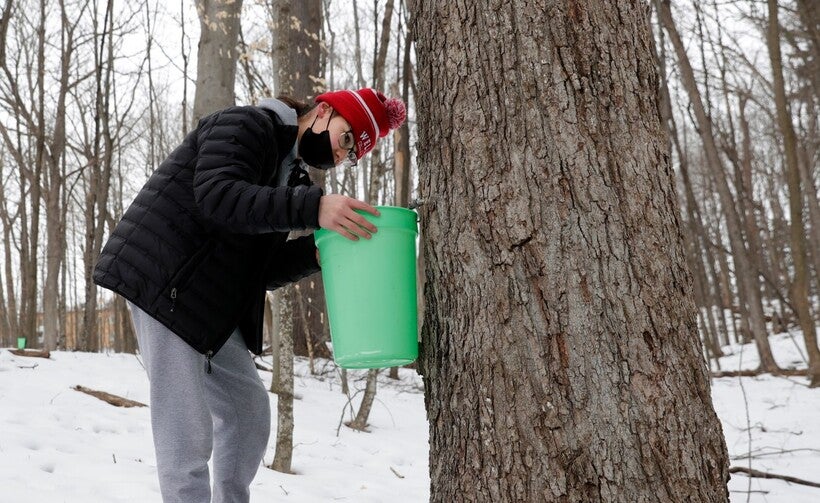 Oneida Nation High School freshman Jonas Johnson hangs a bucket under a spile to collect maple tree sap. On the Oneida Reservation, about 65,000 acres starting on the west side of Green Bay, Wisconsin and continuing into Outagamie County, the census has always reported a smaller population than the Oneida government’s own count. But the 2020 U.S. census resulted in what tribes are hailing as the most accurate picture to date of the size and diversity of people with Indigenous ancestry in Wisconsin. Sarah Kloepping/Green Bay Press-Gazette

Nuthals said some had specific concerns, such as if they had too many people living in their household and they were receiving federal funding. In all these situations, she said tribal officials worked to alleviate those concerns for the 2020 census.

As a result, the Oneida Nation had the fourth-best census response rate of the more than 500 Indigenous nations with reservations in the U.S.

The total population for enrolled citizens of the Oneida Nation in Wisconsin is a little more than 17,000. In 1970, that estimate was 6,500 people. Nuthals said more Oneidas enrolled as citizens with the tribe in the early 2000s after a large per capita payout was offered.

Enrollment in the Oneida Nation typically requires a person to be at least a quarter Oneida, a formula referred to as blood quantum.

"They got closer to being accurate," Nuthals said.

Nuthals said federal grants and funding had once been heavily reliant on census statistics, so accuracy was important. That's less the case now, because many federal agencies now use the tribes’ self-reported population counts. However some funding may still consider census counts and political districts are drawn based on census numbers.

The population of enrolled citizens on the reservation is currently 4,626, which is up from 3,121 in 2000. Nuthals said the increase is also attributed to more housing being built on the reservation and its proximity to Green Bay for employment opportunities.

The overall population on the reservation for all races increased from 22,776 in 2010 to 27,110 and officials say that's largely due to increased housing availability on the east side in Hobart and on the west side of Green Bay.

While the population reporting became more accurate during the 2020 census despite the challenges from the pandemic, Nuthals said a lot of information wasn’t accurately collected because of the pandemic, such as household incomes, poverty rates and education levels.

Frank Vaisvilas is a Report For America corps member based at the Green Bay Press-Gazette covering Native American issues in Wisconsin. He can be reached at 920-228-0437 or fvaisvilas@gannett.com, or on Twitter at @vaisvilas_frank. Please consider supporting journalism that informs our democracy with a tax-deductible gift to this reporting effort at GreenBayPressGazette.com/RFA.