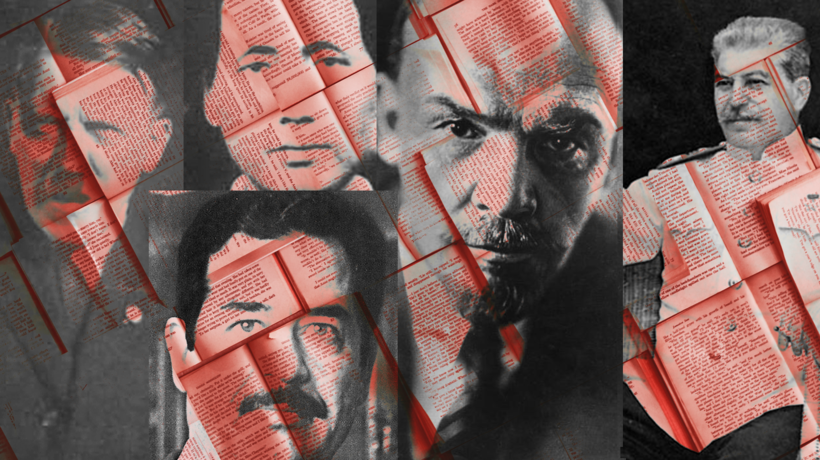 Journalist Daniel Kalder On His Trip Through 'Literature By Dictators' Subgenre
By Anne Strainchamps
Share:

When they weren’t committing mass murder, many of the noteworthy authoritarian leaders of the 20th century wrote books. Terrible books.

In a perverse feat of literary endurance, or masochism, journalist Daniel Kalder recently read them all. In "Infernal Library," his new guide to the best and worst of dictator literature, Kalder charts the course of toxic prose from the original strongmen — Vladimir Lenin, Joseph Stalin, Adolf Hitler, Mao Zedong — to contemporary incarnations like Muammar Gaddafi, Ruhollah Khomeini and Saddam Hussein.

Wondering what it’s like to soldier through Chairman Mao Zedong’s collected works, be chased by Benito Mussolini’s historical bodice-ripper "The Cardinal’s Mistress?" Kalder has one word: "Diabolical."

Here are just a handful of the books Kalder read, along with his thoughts on them. This interview has been edited for brevity and clarity.

"Zabiba and the King" by Saddam Hussein

This was one of the first things I read. In 2003, I discovered that Saddam Hussein had written a romance novel and I thought, "What kind of a romance novel does a murderous dictator write?"

It's fairly terrible. It’s got a "Thousand and One Nights"-type structure, with a grandmother telling some children the story of a pagan king who falls in love with a young Muslim woman, who instructs him in the art of leadership. But it’s also full of wildly inappropriate content — scenes of rape and weird descriptions of bestiality in northern Iraq.

The whole thing is half spiraling out of the author’s control. I think he had no idea what he was revealing.

After reading this stuff for a couple of years, I started to get accustomed to it. That was especially important when I got to Chairman Mao because he was really awful. Reading "On Contradiction" was a diabolical experience. I read it when I had a fever and thought "maybe if I’m half-hallucinating, this book will be more tolerable." It wasn’t.

People forget that Mao’s "Quotations" is the most circulated book in history after the Bible. It was huge. Jean-Paul Sartre was a fan. It went out of print in the 1980s but it’s coming back now.

There’s this sense that Mao was a murderous dictator, but on the other hand, he came from nowhere to run the most populous country on earth and turned it into a nuclear superpower. So attempts are being made to extract leadership lessons for contemporary businessmen out of his military writings.

This book was created because Stalin had murdered and erased so many people, but there were still all these books floating around the Soviet Union with references to non-persons or people you suddenly couldn’t mention. So he commissioned his own version of history, called "The Short Course."

He only wrote one chapter himself but in the archives you can see his editorial pencil on page after page after page — not just comments like "give us a bit more about Lenin here," but line editing and copyediting and word choice.

He was this cruel micromanaging line editor from hell. Which is astounding when you think that he was a murderous tyrant running a country. I guess that that shows how significant he thought books were.

"Mein Kampf" is clearly the work of a murderous fanatic — in your face raw hatred and violence. It was extremely difficult to read. I couldn’t just sit down and go all the way through it; I had to do it in chunks and pieces over time. It’s a book that taps into an ancient hatred.

The Communist texts are more millenarian, "we’re going to have this paradise on earth" — an ancient promise — tied to all this theory that’s really difficult to read. Whereas in "Mein Kampf," the theory’s gibberish, but it taps directly into these evil emotions. And encourages them.

Reading these books was excruciating but for me also really interesting, because I wasn’t just reading abstracts that someone else had written, explaining them. I was close to the raw material of what was forced on people, what people went through. Human beings forget so easily, it’s amazing. And we don’t have a particularly good track record for not repeating certain errors.

Related Links:
Read this story and others like it on TTBOOK.org