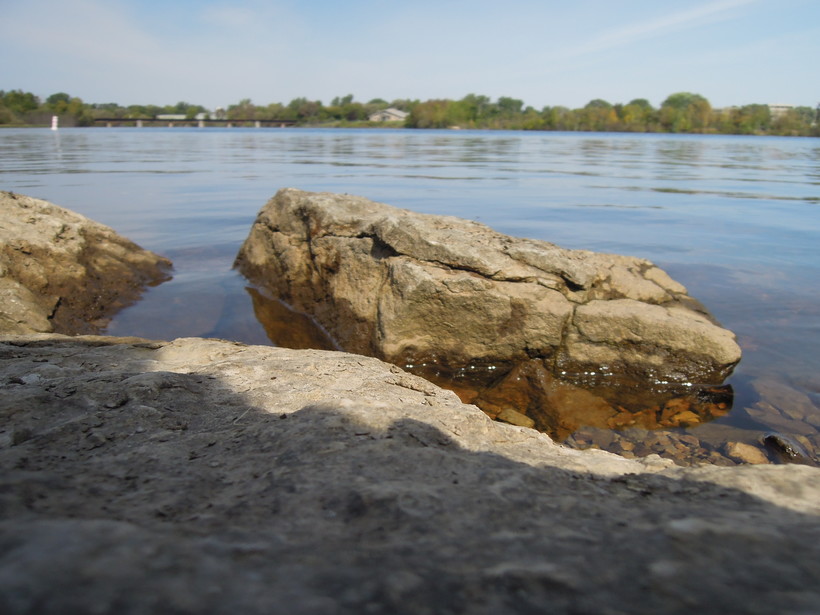 The "Back Forty" mine is upstream from the Menominee River, pictured above. Residents are divided on whether the mine would do more harm than good if built.

Protesters Speak Out Against The Project While Supporters Are Largely Silent
By Danielle Kaeding
Share:

Toronto-based Aquila Resources plans to mine gold, zinc and other metals in Michigan upstream from the Menominee River. So far, the mining company has been able to secure three of four permits needed to move forward. As the project nears final approval, tension is mounting among residents along the Michigan-Wisconsin border.

On a recent Friday evening, around 15 protesters gathered on street corners outside the Ogden Club in Menominee just across the border from Marinette. Cars honked in support as protesters held up signs reading "No Mine Save Our Water" and "Be The Voice Of Our River."

Dale Burie of McAllister, Wisconsin, was among them. He’s president of the newly formed Coalition to Save the Menominee River. For Burie, the "Back Forty" mine poses too great a threat to the region’s economy, environment and public health.

"My land is 228 feet from the Menominee River … and so we would definitely be affected," he said. 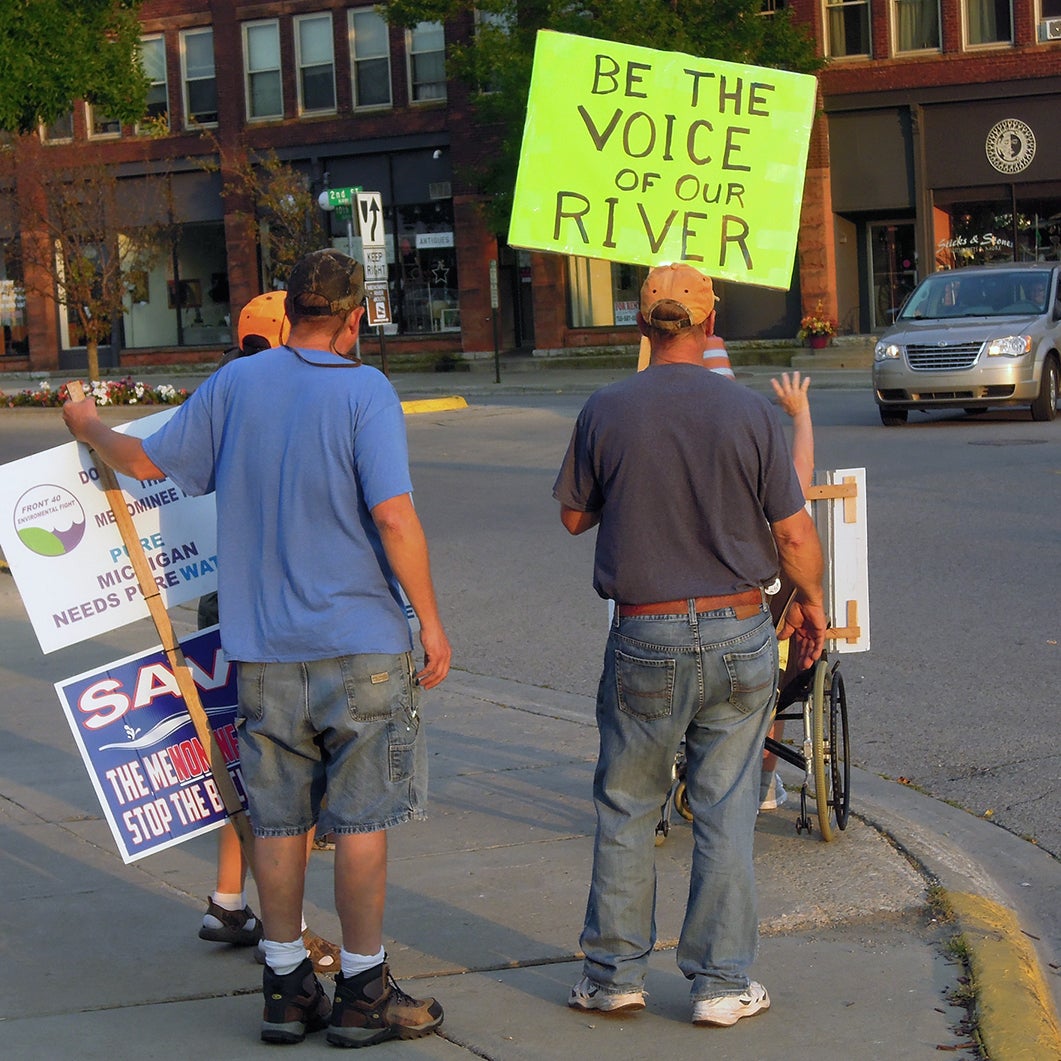 Mine protesters outside the Ogden Club in Menominee, Michigan. Danielle Kaeding/WPR

Tina Lesperance of Stephenson, Michigan, stood nearby in an outfit resembling the grim reaper with a sign that read "Cyanide Kills." The chemical is used in a diluted form to extract gold from ore as part of the mining process. Lesperance said that’s just one reason she opposes the project.

"I’m very fearful that the Menominee River will be poisoned with acid mine drainage, which is actually sulfuric acid," she said. "It’ll kill the fish. It’ll kill the birds — anything that comes in contact with it."

Protests like this one have been held outside the Ogden Club in Menominee since the spring. Lesperance said they gather here because of the club’s ties to the mine.

"The people that own the Ogden Club are investors of the mine," she said. "They were also employees that worked for Aquila … so we want to bring awareness to people that this business is behind the mine."

Ogden Club co-owner Robin Quigley recently retired as a spokeswoman for the mining company. She declined to comment on the protests. Quigley and her husband Tom do have stock in the company, but she said it’s only a fraction of the company’s shares. The couple has leased space above the bar and restaurant to Aquila for meetings about the project.

Waitress Jennifer Dulak defended the Quigleys, adding the controversy around the mine has ruined a lot of friendships. 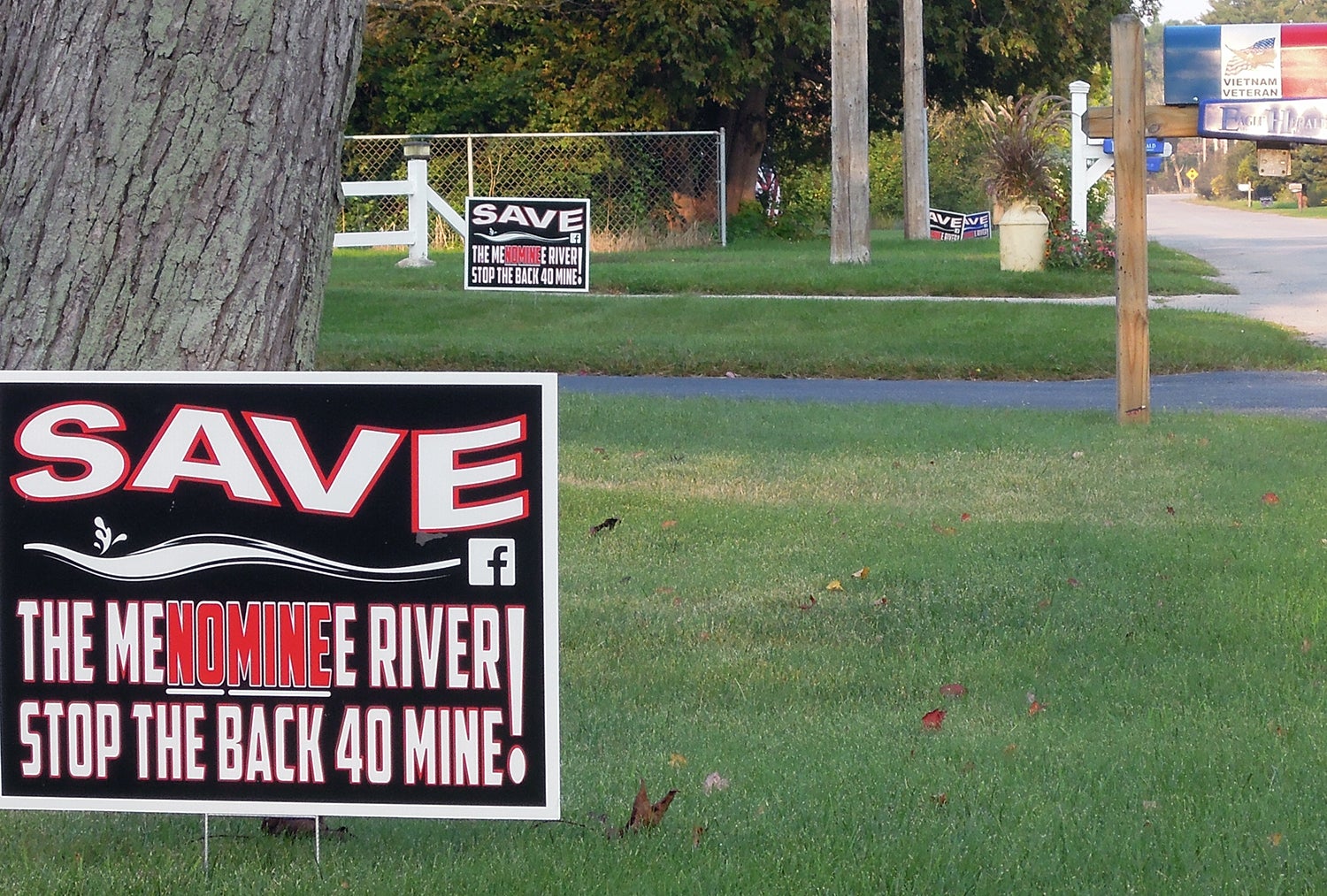 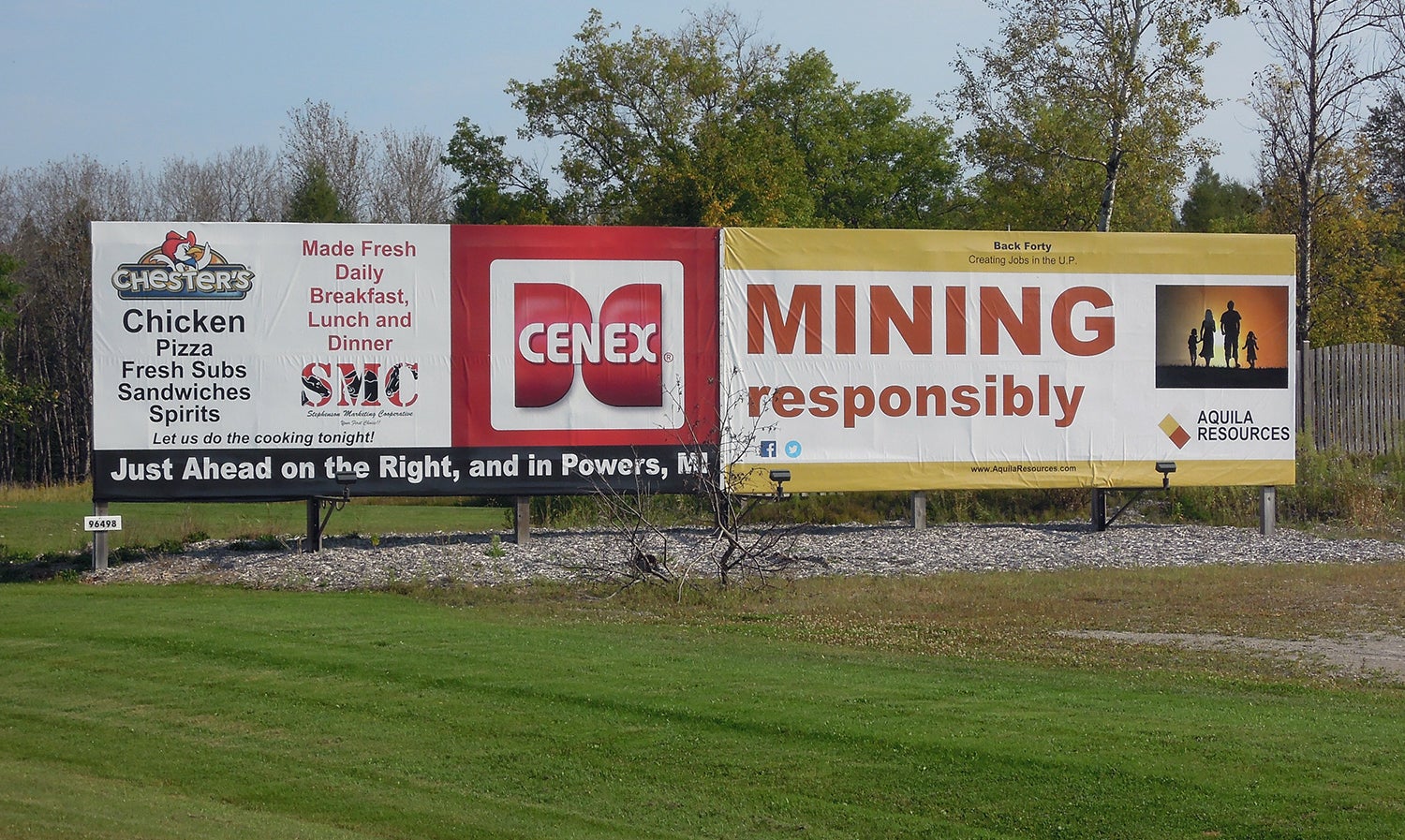 "I have a lot of friends that are protesting right outside here while I’m trying to work and make money and support my family," she said. "It sucks, I guess."

Dulak said she made roughly $700 a week in tips last year, but she’s lucky if she can make half that now.

"We’ve had a few employees walking down the street, coming to work, wearing our Ogden Club shirts and yelling stuff at us. 'No Back Forty mine.' Just kind of being rude," she said.

Several customers at the Ogden Club said they would support the mine if it can be built without harming the environment and public health. They say the project would create hundreds of mining jobs, millions in tax revenue and help stem the region’s population loss. However, the mine is so controversial here that supporters declined to speak on tape. Aquila Resources spokeswoman Chantae Lessard understands their silence.

"They don’t want their businesses, for example, to be protested at … I think that once we get all of our permits you will see a lot more visual support for the project, but right now people just want to stay private," she said. "They don’t want the attention that this project brings from those who oppose mining."

Lessard said Aquila’s Back Forty mine would create around 240 jobs in the first year and about $20 million annually in local, state and federal tax revenues. The company just resubmitted its application for a wetlands permit to Michigan regulators this week. Lessard said they hope a final permit will be issued to them in January. But, protesters like Tina Lesperance hope Michigan's Department of Environmental Quality will reject it.

"And, if they don’t, we’re not going to stop. We’re going to do everything in our power to stop them."

With so much at stake, emotions are running high. One man driving by the club screamed at protesters to "get a job." Later in the evening, Ogden Club co-owner Robin Quigley read a retirement card she was given by mine opponents. Inside are snide remarks like "Worst of Luck."

Menominee Tribe Requests Consultation On Mine

Mine opponents are hoping to invoke the federal government’s treaty responsibilities as one way to prompt further review of a wetlands permit for the Back Forty project.

Gary Besaw, chairman of the Menominee Indian Tribe of Wisconsin, said they sent a letter to the U.S. Army Corps of Engineers and U.S. Environmental Protection Agency in August to request consultation with the agencies on federal permitting authority that’s been delegated to Michigan. 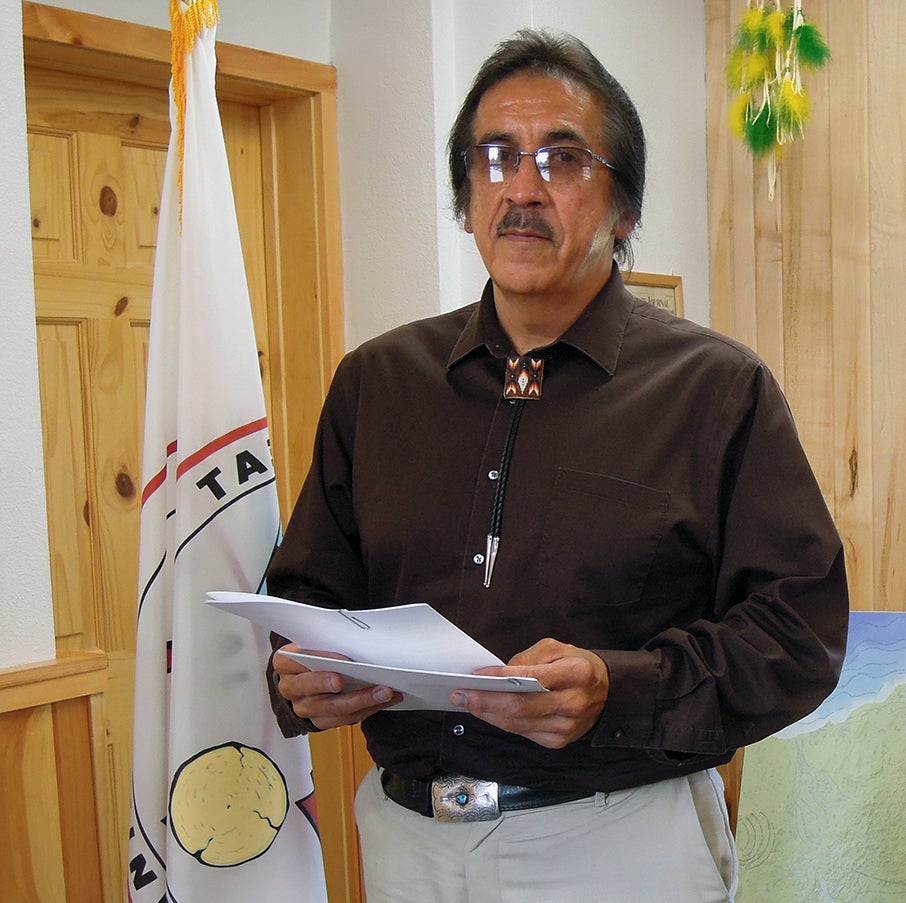 "Many of the cultural concerns we have regarding irreparable damage that could happen if this proposed mine goes through … we think we’d have a stronger protection if it went federal because right now the feds are saying because we delegated this to the state, this is a state action not a federal action," Besaw said.

Besaw said Michigan regulators have discovered burial mounds and other culturally important resources to the tribe on land on or near the mine site. Without federal oversight, Besaw said Michigan isn’t obligated to apply provisions of the National Historic Preservation Act or National Environmental Protection Act as part of the permitting process.

"Marinette, Menominee and the mouth of the Menominee River is the origin of the Menominee tribe, as our stories go, over 12,000 years ago … This is part of this ancestral land currently where this proposed mine is," he said. "It’s in our 1836 treaty cessation to the United States."

A spokeswoman for the U.S. Army Corps of Engineers declined to comment on the letter and directed all questions to the EPA. A spokesman for that agency provided a prepared statement in regards to the tribe’s letter, saying that permitting of wetlands under the Clean Water Act has been assumed by Michigan with no direct authority from the EPA:

We are continuing to exercise oversight of the state’s permitting program and to review individual permit applications for conformance with the CWA. By statute, permitting authority for an individual permit application would typically transfer to the U.S. Army Corps of Engineers only if the State were unable to resolve an EPA objection to a permit condition within the statutory time period. The tribe has requested consultation on another rationale they have proposed for the Corps to assume federal permitting authority. EPA is reviewing the Tribe’s request to consult. While EPA reviews the Tribe’s request, we will continue our oversight responsibilities and will review any new wetlands fill permit applications for the Back 40 project.