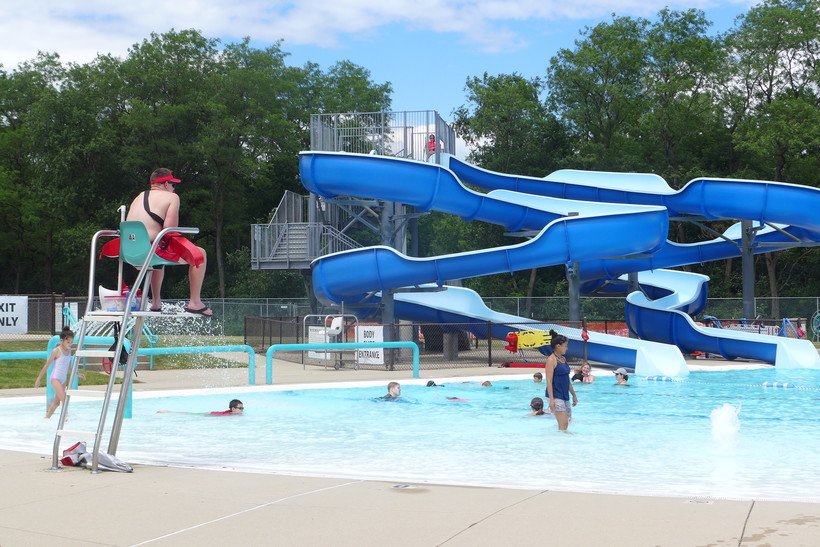 The Walter Bauman Aquatic Center in Middleton opened as scheduled even though many community pools around Wisconsin chose to remain closed for the season because of the coronavirus pandemic. In this June 23, 2020 photo, swimmers practice social distancing and are encouraged to wear face masks when out of the water. Shamane Mills/WPR

As Temperatures Increase, Many Pools Across The State Remain Closed Due To COVID-19

For Pools That Are Open, Social Distancing And Mask Wearing Encouraged
By Shamane Mills
Share:

Concern over spreading COVID-19 and lost revenue from fewer swimmers means many communities will not be opening their pools this year.

Forty-nine municipalities that belong to the Wisconsin Parks and Recreation Association have officially closed pools for 2020, while only 24 are already open or plan to at some point, said Kabel Helmbrecht, an association member and recreation director for the Oshkosh Area School District.

There is no evidence that COVID-19 can spread to people through the water used in pools, hot tubs or water playgrounds, according to the Centers for Disease Control and Prevention, which says proper disinfection should kill the virus that causes COVID-19.

"But you have locker rooms, and in Oshkosh, we have a water park with something called the Lazy River that has inner tubes that are reused over and over by individuals," said Oshkosh Mayor Lori Palmeri.

On June 11, the city announced on Facebook the public pool would not open this summer.

Palmeri said the reaction to the decision has been mixed. "Some would really like to see the pool open because they don’t really believe COVID-19 is a concern, while others have been supportive of the decision," she said.

Palmeri added that opening the pool with fewer swimmers to ensure safe distancing would have reduced revenue while expenses like cleaning would have increased.

In Dane County, city officials running the Monona Community Pool estimated that operating at limited capacity would result in $40,000 lost revenue for the season. City officials noted this money would have been transferred out of the Monona’s general fund balance. Plus, the pool wouldn't have been ready to open until July 1.

"Taking all things into consideration, along with guidance from the Wisconsin Department of Health Services that discouraged the opening of public pools, the City Council unanimously decided that opening the pool was not in the best interest of the Monona community this summer due to concerns regarding COVID-19," read a Facebook post from city officials. 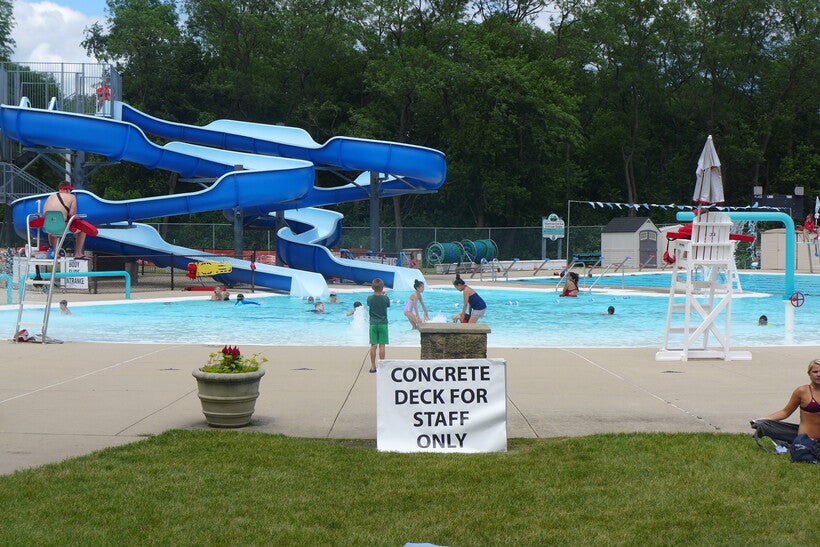 Many public pools around Wisconsin have decided not to open this season because of concerns over coronavirus. The Walter Bauman Aquatic Center in Middleton, shown in this June 23, 2020 photo, has removed pool furniture and encouraged people to bring their own to limit shared surfaces. The pool normally holds over 600 but capacity has been limited to 132. Shamane Mills/WPR

"We advocated strongly that we needed to be able to provide some safer choices for recreation because a lot of other things are not permitted at this time or have to be modified to such an extent it’s easier not to play it," said Rebecca Price, assistant director for public lands, recreation and forestry for the City of Middleton.

The pool opened June 8 under Phase One guidelines set forth by Dane County which allowed the pool to be at 25 percent capacity. There is no pool furniture, but people are encouraged to bring their own. Face coverings are recommended anytime a person is not in the water.

Normally, Middleton’s pool has room for 660 swimmers at a given time. This year, there are 132 per swim session. Price concedes this is a "drastic reduction" but said parents and their kids are grateful to swim in water that’s been treated with chlorine.

And the staff now have summer jobs — and a way to socialize after months of being shut in.

"Our staff are 14-21 years of age. They’ve been home since March without friends, school or sports. To see how happy they are that they can come to work gives me joy. It’s clear it has helped their mental health," said Price.