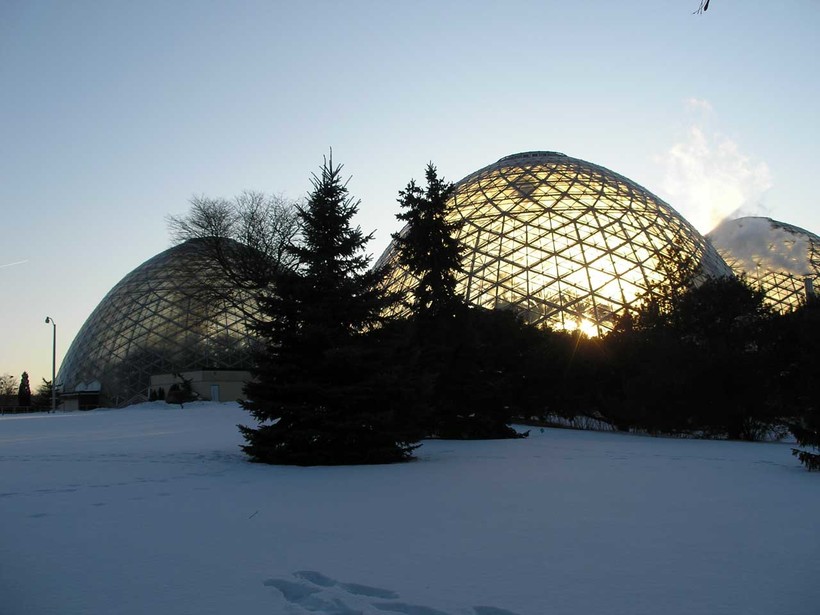 A report commissioned by a joint task force of the Milwaukee Public Museum and the Mitchell Park Domes recommends demolishing the domes and replacing them with a combined $300 million museum and domes building at the site.

The future of the aging domes has been in question for years. The iconic buildings just west of downtown Milwaukee have approximately $30 million in deferred maintenance and the cash-strapped Milwaukee County is unable to fund their repair.

According to the feasibility study, building a new Milwaukee Public Museum in a 222,000-square-foot space and linking a 284,000-square-foot greenhouse building would take up 60 percent of the space of the two existing buildings.

"We do think the long-term opportunity exists to create a great cultural institution for Milwaukee County and its citizens," the study says. "Based on our review of the information we believe there could be a great guest experience which integrates the content and stories from Milwaukee Public Museum with the content and experience of the current Domes and Conservatory. Specifically, the natural history portion of the MPM storyline fits very nicely with the Domes experiences."

Ian Everett, a spokesman with the Milwaukee County Parks Department said this is just one recommendation the County Board will consider regarding the future of the domes.

"There are a lot of people who really love the domes how they are," Everett said. "Whatever happens there is definitely a need for some major fundraising. One thing clear, is all of these discussions have gotten people re-energized about the domes. Admissions have gone up last year and are really good this year. People are paying attention and visiting the domes."

In October, Milwaukee County supervisors formed the joint task force to study the possibility of building a new Milwaukee Public Museum at Mitchell Park, next to the domes. Another domes task force is also meeting. That group is scheduled to complete their discussions this fall.

He said the report is in conflict with what Milwaukee County has said it will do, which is repair and restore the domes.

“The fact is that the study was done and performed,” Haas said. “It has no impact on the future of the domes, or the park or the museum. For this to go forward, we would need an agreement from the public museum. I think it is possible for us to fulfill our current policy to repair and restore the domes for a vastly lower price and make them better in the process.”

The museum has been planning to move from its current county-owned building at 800 W. Wells Street to a new building at a cost of $100 million or more within the next decade. Museum officials were hoping to break ground on the project by 2022. The museum has considered several sites, including locations in downtown Milwaukee.

Ellen Censky, interim president and CEO of the Milwaukee Public Museum, said the task force's findings have raised questions but the museum is still considering its options.

"The process of determining the most ideal location for the museum’s future home is just that – a process," Censky said. "The findings of this report have raised questions and important considerations that will inform our continued study of a new museum and represent another mile marker on the road to making that final determination."

The domes were constructed between 1959 and 1967. They were included on the National Trust for Historic Preservation’s America’s 11 Most Endangered Historic Places list in 2016 and designated as a National Treasure in 2017.

Barb Pahl, a senior vice president at the National Trust for Historic Preservation, said demolition of the domes would result in an irreparable loss for the community.

"The public has overwhelmingly voiced their support for protecting these local landmarks from disinvestment, destruction and demolition," Pahl said. "The National Trust and the Milwaukee Preservation Alliance, founders of the Save Our Domes Coalition, firmly believe a future for the Domes based on preservation and rehabilitation would be the most cost-effective and environmentally-sustainable approach."