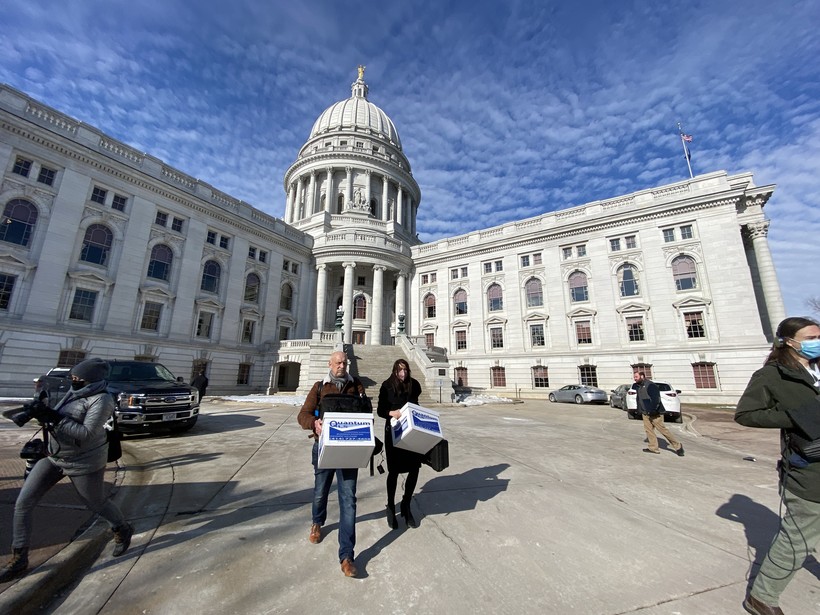 The group claims the 'thousands of pages' of documents include evidence of diocese policies meant to destroy evidence of abuse, fraud
By Hope Kirwan
Share:

A survivor advocacy group says they’re turning over "thousands of pages" of documents to the state attorney general’s office related to the cover up of sexual abuse by leaders of the Catholic Church in Wisconsin.

The group says the new documents include personnel files, insurance paperwork and internal lists of accused priests that contain "almost twice as many names as those released to the general public." The group also says they have minutes from meetings where church leaders discussed "tactics and strategies to evade prosecution and transfer credibly accused clergy to new parishes."

Kaul launched a statewide inquiry into abuse by clergy and faith leaders in Wisconsin last April. As of October, the state Department of Justice had received nearly 180 reports of abuse by faith leaders or of mishandling of abuse claims by religious organizations.

The inquiry has been hindered by some Catholic dioceses not wanting to participate, with some leaders saying past cases of sexual abuse have already been reviewed by legal authorities.

Peter Isely, director of Nate’s Mission, said the investigation inspired whistleblowers around the state to come to his organization in recent weeks and months in an effort to help.

"This network of church whistleblowers that grew organically with the attorney general’s investigation have gotten this evidence. This is criminal evidence," Isely said during a press conference at the state Capitol on Tuesday. "Attorney General Kaul has promised us that his investigation is going to investigate and inquire and report to the citizens of this state of the management practices, corporate policies and secret policies that have allowed so many children to be abused and so much money to be expended on the cover up in this state." 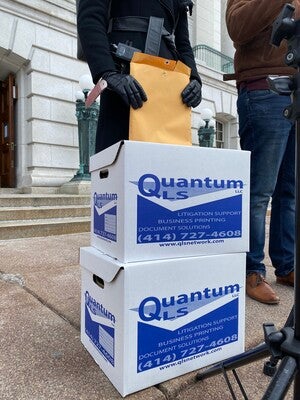 Boxes of documents from whistleblowers in Wisconsin's Catholic dioceses that will be reviewed by the state attorney general's office in a statewide investigation into clergy and faith leader abuse. Diane Bezucha/WPR

Isely said some of the documents are evidence of a 2007 policy by the Diocese of Green Bay that Isely said led to the "systematic destruction of virtually all evidence of criminal behavior." He said that by adopting a policy to get rid of the personnel records of priests who had died or had not served in 50 years, diocese leaders destroyed evidence that victims could have used in fraud lawsuits against the church.

He also claimed the policy described in the whistleblower documents would have needed to be approved by the diocesan finance council, a committee of lay people that now Republican U.S. Sen. Ron Johnson was a member of at the time.

In a statement, Johnson said he shared "a deep sympathy" for the survivors of abuse and called the group’s claims about his knowledge of the diocese’s policy "baseless lies."

"I categorically deny even knowing about destruction of documents much less being 'involved' in their destruction," Johnson said in the statement.

Johnson, who is not Catholic, said he was on the diocese’s committee because of his support for Lourdes Academy, which his children attended.

Nate's Mission is named after Nate Lindstrom, who was sexually assaulted as a teenager by priests while attending Notre Dame Academy, which is a part of the Diocese of Green Bay.

A statement from the Catholic Diocese of Green Bay said that they were not aware of the content of the documents delivered to the attorney general’s office and would "reserve any further comment at this time."

"We wish to emphasize that the Diocese of Green Bay remains dedicated to the protection of children and vulnerable adults," the statement from a diocese spokesperson says. "The diocese has, over the past several decades, implemented a variety of tools to ensure the safety of every person in the diocese, including background checks, rigorous safe environment training and education, mandatory reporting mechanisms and outreach to survivors of abuse."

The statement said the diocese released a list of clergy with substantiated allegations of sexual abuse of a minor in January 2019 after undergoing an outside review of the files of all diocesan priests and deacons.

Sarah Pearson, deputy director of Nate’s Mission, said her organization is continuing to encourage survivors of faith-leader abuse and those with knowledge about their cover up to come forward.

"As we’ve seen with the evidence we dropped off today, it's really only the tip of the iceberg. There's so much more that isn't known that needs to be demonstrated and explored in the attorney general’s investigation. So we’re going to do whatever we can to assist with that," Pearson said.

Kaul said in a statement Tuesday that the DOJ is also continuing to encourage anyone with information about abuse to report to their office.

"The goals of this independent review are to make sure that victim services are accessible to survivors, to stop future cases of abuse, and to get accountability where possible, and we are committed to following the facts wherever they lead," Kaul said in the statement.