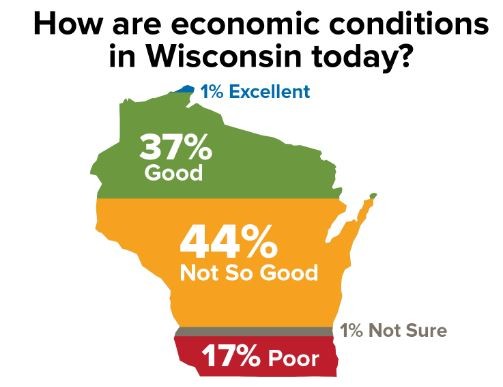 Survey: Most Wisconsinites Have Bleak View Of State's Economy

Current Numbers Are Within Survey's Margin Of Error
By Patty Murray
Share:

Wisconsinites' perception of the state's economy hasn't changed much since the last Wisconsin Survey came out in the spring.  Most people think the economy is either "not so good" or "poor."

The low ratings about the economy now come from 61 percent of respondents.  That's compared to 56 percent in the spring.  The numbers are within the survey's margin of error, so technically it's a wash.

Most Democrats and independents have a dim view of the economy.

Among Republicans, the survey shows moderates give Wisconsin's economy a lower grade than do those who identify as "very conservative."

"Some Republicans seem much more positive about the direction of the state while the Democrats seem much more negative," he said. "But even some of the self-reported independents are pretty low."

When asked if they are better off financially now compared to last year, the respondents were evenly split.  Half of the respondents said that they think next year will be better.