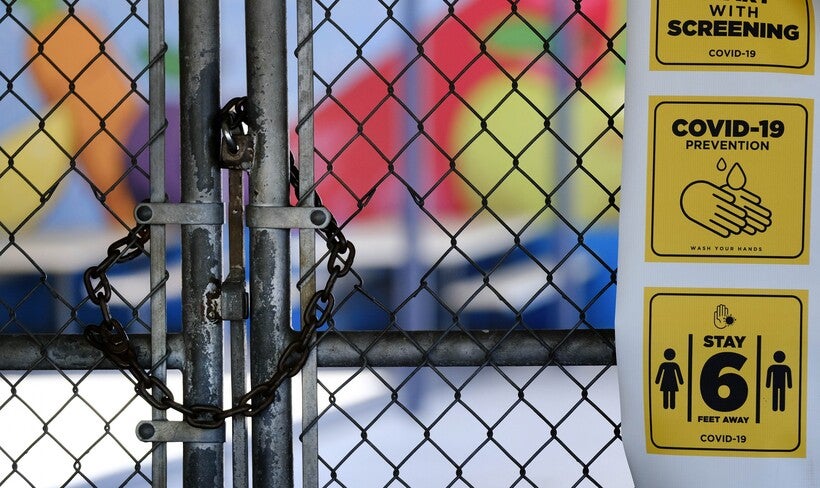 In this July 13, 2020 file photo, a chain-link fence lock is seen on a gate at a closed Ranchito Elementary School in the San Fernando Valley section of Los Angeles. While many California school districts are planning to start the upcoming school year with online instruction, some are also offering child care programs that will bring students onto otherwise quiet campuses. Richard Vogel/AP Photo

Survey: Most Wisconsin Schools Were Virtual In Spring 2020, Though Many Struggled

When the state of Wisconsin shut down schools in March, Wisconsin's school districts were essentially handed lemons and tried to make lemonade with whatever ingredients they already had on hand.

For districts where most students had internet access at home and schools had already implemented a one-to-one device program that provided students with Chromebooks, that transition was a little easier. But according to a survey conducted by the state Department of Public Instruction at the Legislature's order, 13 of Wisconsin's 421 districts opted for a more analog means of virtual instruction.

"We did not have a good option for going to a remote learning situation," said White Lake Superintendent Glenda Butterfield-Boldig.

More than half of White Lake's families didn't have reliable access to high-speed internet as of last spring. So Google Classroom, Zoom and other programs that formed the backbone of spring learning for more connected districts weren't accessible to the district.

However, a survey to families revealed that most had a DVD player or computer that could play discs. Teachers started recording their lessons while other school staff photocopied the worksheets and other materials to go with them, then burned copies of the DVDs to hand out to families at weekly meal distributions. When some of those DVD players or computers weren't up to the task, Butterfield-Boldig said the district dug up extra computers to send home.

Meanwhile, families who didn't have reliable transportation got home delivery of food and lesson materials. The district also purchased Google Voice numbers for all of its teachers that they could use to hold "office hours" for students and their families to call with questions. Some families also added their own spin on home learning.

"I had one family send me some pictures of ... teaching their children to use berries and things to learn how to dye yarn," said Butterfield-Boldig. "Our families got very creative, and we got as creative as possible."

The vast majority — 97 percent — of Wisconsin school districts provided at least part of its curriculum online last spring, according to the DPI survey. However, even many of those districts reported having a non-virtual option as well, for students and families who lacked reliable internet.

"To the extent that school districts are in a situation where they feel that they need to offer instruction remotely, it's a tall order for a school or district that's not already set up to deliver instruction that way," said Erin Fath, the director of DPI's policy and budget team who led the survey's design, collection and analysis. "And it's not all about what the district itself can do."

Fath noted that while schools, especially with planning time over the summer that gave them an advantage over the more chaotic spring, can control things like whether teachers are trained for virtual instruction, they don't have control over students' home situations.

Districts reported substantial challenges to student learning on the family side, ranging from their families' limited ability to help them with distance learning because of work responsibilities, to older kids' needing to babysit for younger siblings, to the psychological stress of the pandemic making it harder to focus on schoolwork.

"There's certain things that money can buy that would make it easier, right — equipment, access, training people, that kind of thing. But there are still those challenges," said Fath.

In the Washington-Caldwell school district, school officials decided to respond to such an unprecedented crisis by focusing on what students had already learned.

"No new content was taught in an effort to reduce stress on students, staff and families during the school closure due to the pandemic," district officials wrote in the DPI survey.

Districts went into the closure having already taught about 75 percent of the year's curriculum. In the survey, even districts that reported making it through 90 or 100 percent of their planned material acknowledged that just because they were able to teach it doesn't mean students were able to learn, or retain the information, as well as they would have in an in-person setting.

Craig Olson, Hayward's superintendent, said teachers in his district drilled down to the key concepts that students most needed to take away from their grade level, foregoing some lessons that had been planned before the pandemic. By the time it became clear the closure would last past the initial two weeks announced in early March, and the district had gotten its learning plan up and running, Hayward was looking at six weeks to deliver nine weeks worth of material.

"We said we're gonna take the absolute concepts to get them ready for their next grade level, their standards and benchmarks that were the most important, especially reading and mathematics skills, and say that was it," he said. "What we found is that that worked really well for the students that came back physically — our students are performing really well, at grade level or where they would have been."

Many families in Hayward, as in White Lake, don't have reliable internet access, so spring learning was done primarily through take-home packets. This fall, Olson said Hayward was able to offer more robust virtual learning, but only because families self-selected whether they wanted to send their kids in person or have them learn from home, as about 25 percent did.

"I don't think our internet services have improved in Northern Wisconsin at all," he said. "I think we'd be in exactly the same boat if we were forced to do this 100 percent virtual."

Butterfield-Boldig, in White Lake, noted that federal money and initiatives to better connect students to the internet in her area couldn't necessarily close the gap — she estimates that the share of families without reliable access is still around half.

"What I've heard anecdotally from a number of our residents in our districts is that they laid all of the cables, but to get them to come over to the house, it's still between $1,000 to $2,000," she said. "So now, in my mind, it's like, well, I can see the water over there, but I still can't get it, and I'm thirsty."

Fath said the survey data didn't have a lot of surprises — the challenges of internet access, budget savings and costs in the spring, barriers to distance learning and other findings generally fell along what DPI had already been hearing from schools, or expecting based on what they knew of the infrastructure around the state and the challenges of having to pivot quickly to new methods of teaching in difficult circumstances.

One thing did strike her, though.

"On the more pleasant side of the surprise spectrum was that there were not a huge number of layoffs," she said. "I think what it speaks to is districts' ability to reassign individuals."