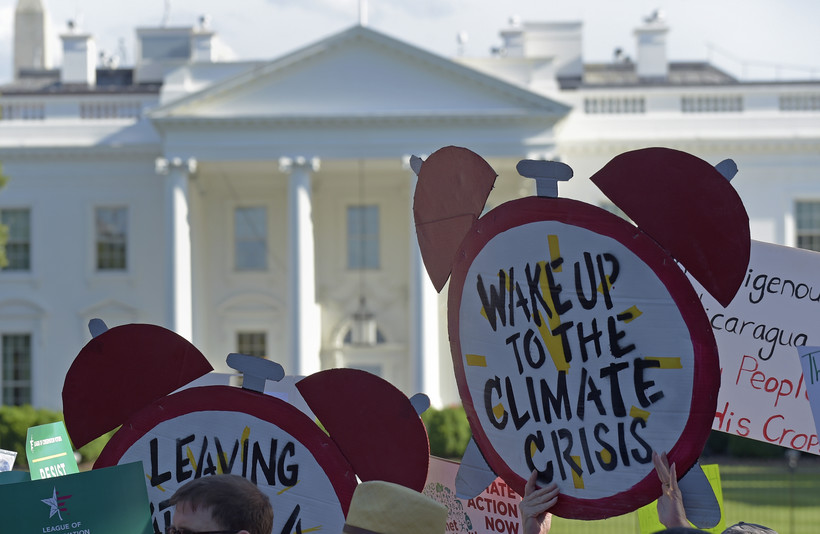 Protesters gather outside the White House in Washington, Thursday, June 1, 2017, to protest President Donald Trump's decision to withdraw the Unites States from the Paris climate change accord. Susan Walsh/AP Photo

A new University of Michigan survey suggests most Americans don’t just believe in climate change; they’re sure of it.

"People are becoming somewhat more concerned over time," said Barry Rabe, a professor of public policy at the University of Michigan. "And are also locking into their positions much more."

The university has conducted the survey twice a year for nearly 10 years, Rabe said. This year, 70 percent of Americans said they believe there is "solid evidence" global temperatures are warming.

But the results were still split sharply on a partisan divide.

Among Democrats who responded to the survey, 83 percent said they believe in global warming. Only 54 percent of Republican respondents answered the same way.

The survey was conducted this spring, before President Trump had announced he would be pull the United States out of the Paris climate agreement.

Though the results suggest Americans are more vocal than ever about the issue, Trump has not made his current position on climate change clear.

He has tweeted in the past about global warming as a hoax but has hardly touched on it during his presidency, Rabe noted. When Trump made the announcement to withdraw from the Paris Climate Accord, he cited "fairness" and business interests, not the environment.

Because of that, some states are taking it upon themselves to take action against climate change.

Rabe said more and more, this kind of action by state government is viewed favorably by the American public.

"We’re seeing 66 percent of Americans who say it is their state’s responsibility to address the issue of global warming," Rabe said. "That is the highest number on that front that we have seen in some time."

Rabe said environmental mandates by individual states during the past 10 years were a huge factor in reducing carbon emissions, even as the population and economy grew. But such action was, until recently, not universally supported by the public.

"We were really quite struck to see, on issues of renewable energy or energy efficiency, these are issues that had very, very strong public support. At about the 75 to 80 percent level," he said. "This is an area where the numbers are quite high regardless whether you’re talking to a Democrat or a Republican."

Rabe said more than half of U.S. states have some version of energy efficiency or renewable energy policies. But what will matter, he said, is how environment-related policies in states increase over time.

"It is indeed one thing to take a bold step and say, 'Gee, we’re going to fly to Beijing and meet with the Premier of China,'" Rabe said. "It’s a much bigger thing to adopt a policy to go through your legislature to build the kind of coalitions that you need to do some of the things that the public seems to want. The real test of this is what states do with this."