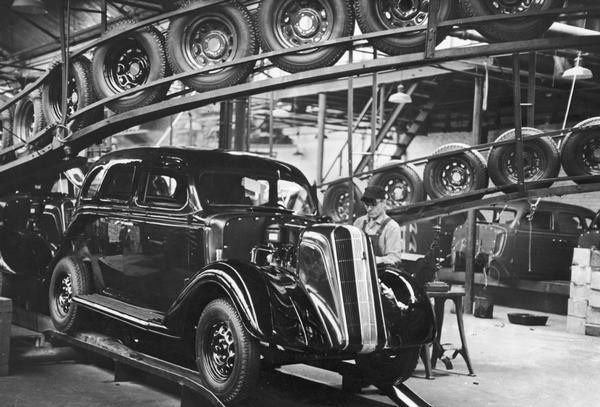 A nearly-completed automobile on the assembly line at Nash Motors in Kenosha.

It’s hard to imagine a time before seatbelts. But on Sept. 25, 1961, Wisconsin became the first state to require seatbelts in the front seats of cars in all models built in and after 1962.

Seat belts had been around, if infrequently used, since the 19th century. Many street cars had lap belts in the 1930s, but few people used them. These early lap belt models kept passengers from flying out of the car but did nothing to protect their heads or torsos.

The Wisconsin born Nash Motors became the first company to offer seatbelts in 1949. Charles W. Nash started the company in 1916 after purchasing the Kenosha-based Thomas B. Jeffery Company, a bicycle-turned-automobile factory. Nash opened plants in Milwaukee and Racine as well as in Arkansas; and by the 1920s, Nash was one of the nation’s bestselling car companies.

Seatbelts aroused heated debate despite increasing scientific research in the 1940s and 1950s affirming their value in saving lives. Among the arguments put forth against seatbelts was that they could cause internal injuries; that they prevented easy escapes from cars submerged in water; and that devices frequently failed. All were disputed by researchers but opposition remained fierce.

Some opponents argued the decision to use a seatbelt should be personal rather than legal. A letter to the Appleton Post Crescent in 1964 stated, "As long as the life risked is his own, I believe the individual should decide whether or not the use of safety belts is wise."

Another letter in the Wisconsin State Journal in 1957 argued the value of seat belts had yet to be proved, especially in cases of keeping people from "being thrown out of the car." Door latches, wrote Sam of Madison, "can accomplish this without preventing speedy escape from an auto going into a stream or catching fire, which are not infrequent events." Some car owners cut the seat belts out of their cars.

It wasn't until the late 1950s that an engineer at Volvo devised the three-point seat belt most of us are familiar with today. This new model secured the chest and hips with a single belt. These seatbelts became mandatory in all new United States vehicles in 1968.