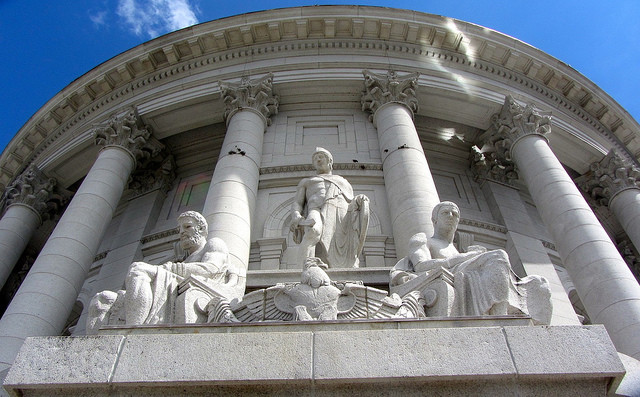 5-2 Decision Finds That Collective Bargaining Is No Constitutional Obligation, But Rather 'A Creation of Legislative Grace'
By Shawn Johnson
Share:

Walker's Act 10 had already survived two federal lawsuits, and the case the Supreme Court addressed was the last significant challenge in state court. Unions representing Madison teachers and Milwaukee city workers had sued to block the law, arguing it infringed on their constitutional rights of association, free speech and equal protection.

Writing for the majority in a 5-2 decision, state Supreme Court Justice Michael Gableman said that public-sector collective bargaining remains “a creation of legislative grace and not constitutional obligation.”

Speaking to reporters at the Wisconsin State Fair, Walker called it a “big win.”

“You've got a 5-2 decision, so I think that's one more affirmation it wasn't just down traditional lines of the Supreme Court,” said Walker. “I think that they showed that the law is pretty clear, that the Legislature and I had every right in doing this, and I hope people can move beyond the legal challenges and just move on to moving this state forward.”

Attorney Lester Pines, who represented the plaintiffs in the lawsuit, said Act 10 was designed to eliminate unions. Pines nevertheless predicted that it wouldn't work.

“(Unions) took advantage of this opportunity to organize their membership, and they will engage in activities that will be different than what they have done in the past,” said Pines. “So anyone who thinks that this is a death knell for municipal employee unions is wrong.”

Act 10 does not apply to police and firefighter unions, though Republican legislative leaders said on Thursday that they would not rule out expanding the law to include them next legislative session.