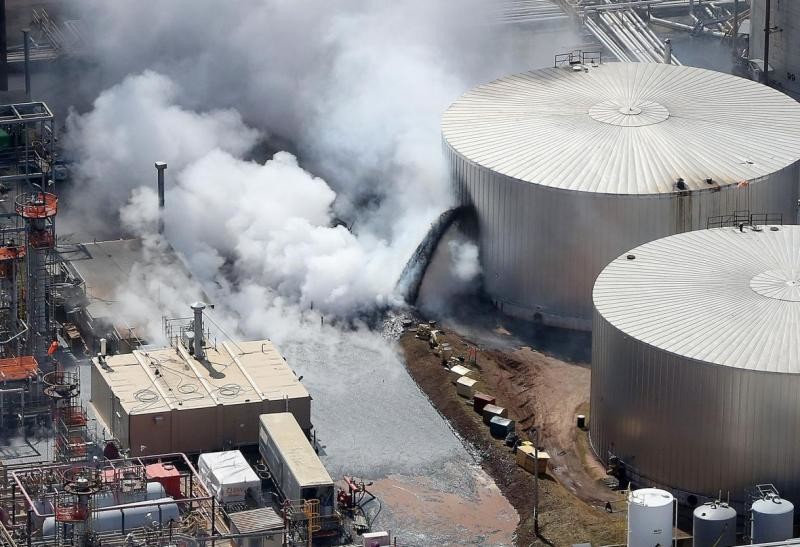 A class action lawsuit has been filed in federal court against Husky Energy in response to an explosion and series of fires at the company's Superior oil refinery in April that caused a temporary evacuation of the city and prompted 36 people to seek medical care.

The complaint was filed on behalf of Superior residents Jasen Bruzek, Hope Koplin, and Neil Miller on Aug. 20. The lawsuit states the three incurred damages "including, but not limited to, economic loss from evacuation-related expenses, lost wages, disruption and inconvenience, and interference with property rights."

Bruzek said his family incurred expenses related to food and lodging after the evacuation, noting his wife had to take off work to watch their children when school was canceled the next day. Miller said his family couldn't afford a hotel after the evacuation and had to spend the night in Duluth's Canal Park. Koplin said her mother had to be evacuated from her home, where she was receiving hospice care. The complaint claims the evacuation stressed her mother’s health and that she passed away a week after the refinery explosion.

The complaint also alleges Husky was negligent in refinery operations.

"Defendants failed to exercise due care in the maintenance and monitoring of the Husky Superior Refinery so as to prevent fires, explosions, and the uncontrolled release of hazardous substances, odors, and wastes into the environment," the complaint reads.

The filing points to recent findings by the U.S. Chemical Safety Board that a worn valve is likely to have led to the explosion at Husky's refinery in Superior on April 26. The complaint also cites more than 30 federal safety violations by the refinery by previous owner Murphy Oil and citations from the U.S. Occupational Safety and Health Administration when it was owned by Calumet Specialty Products. In addition, it refers to a 2015 explosion and other fires at Husky's refinery in Lima, Ohio.

The complaint claims Husky's operation of the refinery was "extrahazardous and/or ultrahazardous" because of its use of the highly toxic chemical hydrogen fluoride. The three also claim the company interfered with their property rights and trespassed on their lands through lingering odors, noise and soot.

All three are seeking damages of an unspecified amount to be determined at trial.

"This is one of the largest disasters that Superior has ever experienced — and it continues to impact the lives of many in this community. Our clients have not been reimbursed for costs they were forced to incur and for being forced to evacuate their homes because of this explosion — an explosion we allege was caused by Husky's negligence," said attorney J. Gordon Rudd, Jr. in an email. "The lawsuit challenges that it's Husky — not residents of this community — who should bear those costs. Our clients aren't the only ones — many in the community are in the same situation. And we're working to address that in this case."

Husky Energy spokeswoman Kim Guttormson said in an email Monday that the company has been working to resolve claims for food, lodging and other evacuation-related expenses.

"To date, more than 95 percent of the claims presented to us have been successfully closed and we continue to address the others," said Guttormson.

Husky has received more than 3,300 claims this summer. Guttormson said the company declined to comment further on the pending litigation.