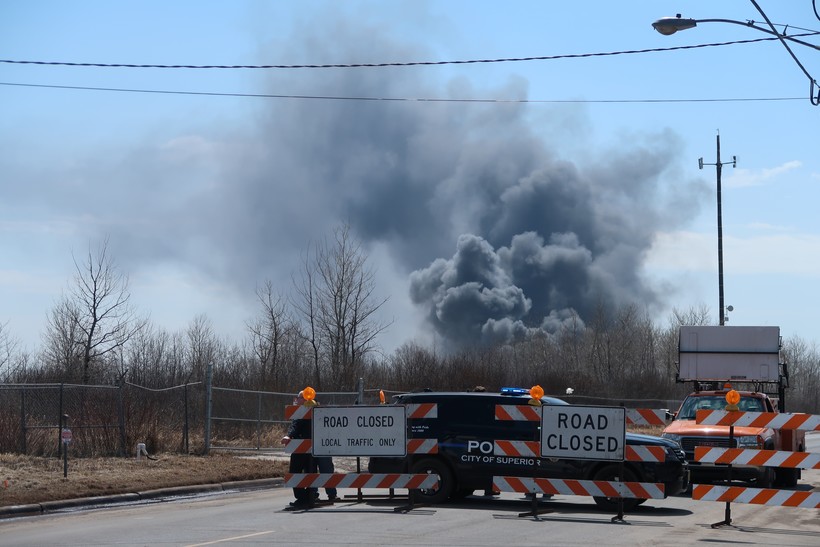 People in south Superior are concerned about whether it’s safe to plant vegetables or work with soil after a series of explosions and fires at the Husky Energy oil refinery. University of Wisconsin-Extension officials are looking to calm people’s fears.

Some have questioned whether people may be at risk due to last week’s fires, including Steven Sternberg, an associate professor of chemical engineering at the University of Minnesota Duluth. Sternberg said he would limit contact with soil to avoid any long-term health problems associated with polycyclic aromatic hydrocarbons (PAHs), which are groups of chemicals that are released from things like burning coal, oil and gasoline.

The UMD professor said the plume contained a lot of particles that likely ended up on the ground downwind from the area that was evacuated.

"A one-time exposure — it’s not that bad," said Sternberg. "But, if you get exposed for a whole summer to these things, that could start to increase your chances."

Sternberg said it could take as much as a year before the chemicals decompose.

Those statements are drawing concern from gardeners and growers in the area, says James Anderson, community and economic development educator with UW-Extension in Douglas County. He said officials with UW-Extension are looking for licensed labs to test garden soils "for petrochemicals and other materials that could’ve been part of the fallout from the Husky fire a week ago."

People who live closer to the refinery are advised to use gloves while gardening and clean coveralls and gardening tools, said Jane Anklam, agriculture and horticulture educator with UW-Extension in Douglas County. She said plants do not normally absorb compounds like PAHs from the soil, but people should clean any vegetables before they eat them.

"We have (PAHs). Just because of where we live we have them. There are carcinogen-causing PAHs," said Anklam. "Not to downplay that, but the information we have from the testing is saying, indeed, there has been some fallout. It’s not fallout enough to change your gardening, to stop gardening or to stop eating fresh local food."

If people are concerned, she said they can refer landowners to private labs for soil testing. However, they’re not recommending tests. Anklam said they’re basing recommendations on the state toxicologist’s review of soil monitoring by Husky Energy's third party contractor.

Husky Energy has said any soot and ash from the fires was likely washed away by rain or snow in the days following the incident. Monitoring has found no observations of soot around the refinery and across the community.

"What we’ve learned so far is that it’s basically a treatable situation, that you should be able to clean everything right off and have a healthy garden," said Paine.

In an advisory, the Douglas County Health Department also recommends wearing gloves while washing any soot and ash away with soap and water on properties surrounding the refinery.

The National Institutes of Health said around 15 of 100 forms of PAHs are anticipated to be carcinogens, noting there’s limited evidence on the link between cancer and exposure. The Centers for Disease Control and Prevention said many people are exposed to a mix of the chemicals through vehicle exhaust, cigarette smoke and forest fires.