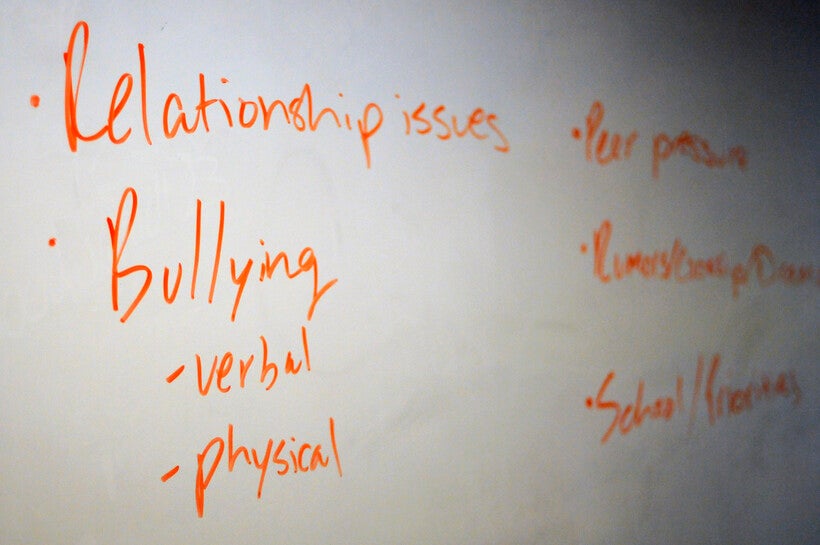 In this Nov. 15, 2018 photo, the board in a classroom is shown with key words during a Youth Aware of Mental Health session at Uplift Hampton Preparatory School in Dallas. University of Texas Southwestern Medical Center offers the program to schools to help educate students about mental health and suicide prevention. Benny Snyder/AP Photo

A Suicide Prevention Program For Veterans, Started By A Wisconsin Gun Shop Owner, Is Expanding

This article involves details that may be upsetting to some readers. If you or someone you know is considering suicide, call the suicide prevention lifeline at 1-800-273-8255 or text "Hopeline" to 741741.

A suicide prevention program for veterans that started out as one Dane County gun store owner trying to help distressed customers from acting on that impulse now includes 18 firearm retailers across Wisconsin. 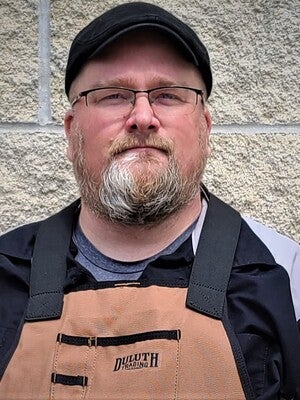 Five years after Chuck Lovelace started the Gun Shop Project with Safe Communities Madison-Dane County, the program has gradually grown and hopes to have firearm retailers and shooting ranges in all the state’s 72 counties participating by next summer.

A Madison veterans hospital is working to expand that program, said Adam Howarth, community engagement and partnerships coordinator for the suicide prevention program at the Madison VA Hospital.

"This is a big push," Howarth said. "We know that 70 percent of the veteran community is dying by firearms, and we want to try and make a change there."

The Gun Shop Project began in 2016 to educate gun retailers on how to recognize potential signs of someone considering dying by suicide. For instance, according to Lovelace, a customer might say, "I won't be needing a cleaning kit," or "I don't care what caliber is it." These are some signs included in a letter Lovelace wrote urging retailers to consider joining the program, which now includes voluntary gun storage for up to three months for veterans in crisis. 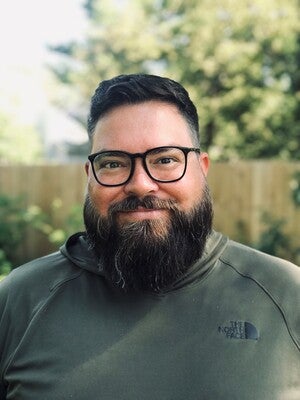 "Many times, they don't want to call police and say, 'Hey, I need firearms removed from the home,' because of the stigma. We try to give them a safe and respectful option," said Lovelace, speaking during the ninth annual Madison VA Community Mental Health Summit held virtually Tuesday, Sept. 21.

Some might instead choose to ask a family member or fellow veteran to take their gun temporarily, said Susan Smykal from the Medical College of Wisconsin.

"But there are instances where the veteran or individual doesn’t have those resources, or perhaps they don’t trust someone to give them their firearm back. But they do trust their retailer," said Smykal, who is part of the Captain John D. Mason Veteran Peer Outreach Program, which promotes the Gun Shop Safe Storage Program to retailers.

Suicide rates among the general public have been increasing for the past 20 years, but among active military personnel and veterans of the wars after 9/11, the suicide rate is even higher, outpacing average Americans, according to research from Brown University.

"If I've got four pots on the stove and only one is boiling over, I should probably start there. And that's what we’re trying to do," said Howarth. "If we know that a segment of the population that we serve is a higher risk, let's start there."

According to a veteran outreach program that is part of the Medical College of Wisconsin, more than half of suicides aren't due to a mental health disorders. Rather it may be veterans are going through a divorce, missed a promotion, or other situation that makes them feel hopeless. 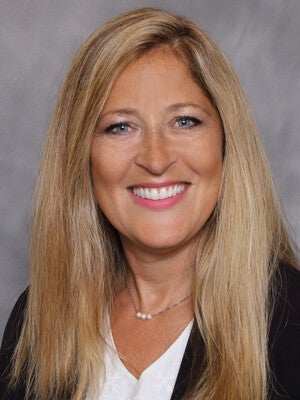 The despair they are feeling inside may not always be apparent.

Lovelace recalled how a customer who was a Marine Corps veteran killed himself with a gun he purchased from Lovelace's Mount Horeb store in 2016.

He didn't show any outward signs something was wrong, Lovelace said. That event devastated the retailer and prompted him to take action to prevent future suicides. Lovelace has since moved his business, Essential Shooting Supplies, to Park Falls.

Most veterans own seven firearms on average and a third have a gun in the home that is loaded, according to the Medical College of Wisconsin veteran outreach program.