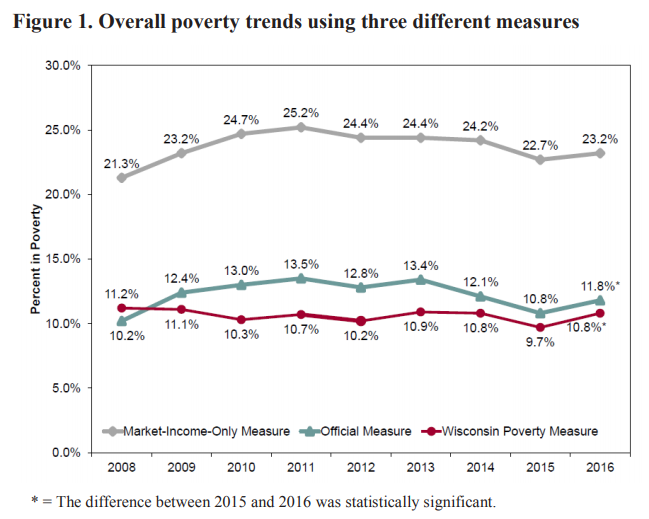 A study released last week shows a rise in the rate of Wisconsin residents living in poverty, even as employment ticks up throughout the state.

The most recent Wisconsin Poverty Report tracked poverty levels in 2016, and established the poverty rate at 10.8 percent — that's up from 9.7 percent in 2015 and the same as 2014, before the Great Recession recovery was credited for getting the rate below 10 percent in 2015.

The state poverty rate is based on three data sets: market-income, which is income from employment; the federal poverty rate; and the Wisconsin Poverty Measure, which was developed at the University of Wisconsin-Madison and includes government subsidies as part of a family's income.

"I was very surprised to see things not continuing to go down," said Timothy Smeeding, the Lee Rainwater distinguished professor of public affairs at the UW-Madison La Follette School of Public Affairs. Courtesy of the Institute for Research on Poverty

Smeeding, a former director of the UW-Madison Institute for Research on Poverty, led the study.

Contrary to the overall increase in poverty rates, the study found 26 of Wisconsin's 72 counties had rates significantly below the state average of 10.8 percent.

"We never had so many doing so well," Smeeding said, referring to lower rates in the western and middle portions of the state over to Green Bay.

"Milwaukee is the only place that's significantly poorer than the rest of the state," he said.

A lot of it has to do with race, Smeeding said, but more research needs to be done on its impact.

"This summer we're going to try and dig into minority poverty in the state as a whole and particularly in Milwaukee County, where three-quarters of the African-American population in Wisconsin lives, for instance," he said.

Other factors affect the state's poor, Smeeding said, even as the state's unemployment rate is at a record 2.8 percent. For one, Smeeding said it takes money to go to work, for example you have to pay for child care or pay for the gas it takes to get to and from work.

According to a summary of the report, government assistance programs such as SNAP, or Supplemental Nutrition Assistance Program, and tax credits helped reduce poverty in previous years. But the gain from that assistance was more evident in 2015, when more residents participated in the food share program.

"This has left the (Wisconsin Poverty Measure) poverty rate about the same as the 2011 to 2014 years, showing little or no effect of a slowly expanding Wisconsin economy through 2016," the summary states.

The study in its 10th year used data from the U.S. Census Bureau's American Community Survey to examine 28 areas in Wisconsin.