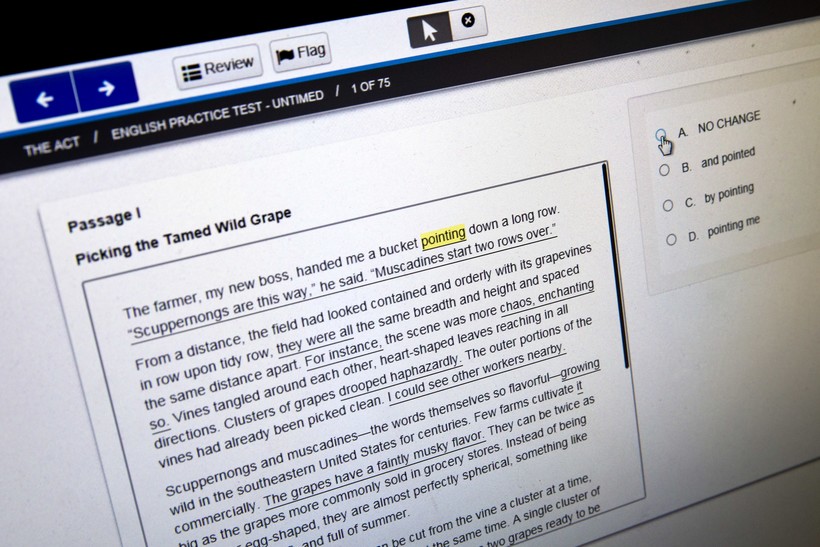 In this May 6, 2015 file photo, a computer-based practice ACT English test is displayed on a computer monitor in Washington. Jacquelyn Martin/AP Photo

Schools in Wisconsin and across the country have invested a lot in technology, and new research is questioning how effective it is in teaching kids to read.

A study done by a think-tank that examines learning in a digital age found Wisconsin fourth graders who used tablets in most classes had reading scores nine points lower on a standardized test than those who didn’t use tablets in class.

"Nine points is something equivalent to a year’s worth of learning so it’s almost one grade level," said Helen Lee Bouygues, founder of the Reboot Foundation which did the study using 2017 data from the National Assessment of Educational Progress, or NAEP, often referred to as the "nation’s report card."

The negative effect of technology on learning wasn’t as strong with eighth graders and overall results were mixed. The NAEP tests reading and math.

Wisconsin school officials note the data on the amount of screen time in the classroom is self-reported by students whose memory may be taxed after hours of testing. They also make the point that the study focuses on how much computers are used, not how rigorous it was.

"What we really need to think about in terms of technology use is quality not really the quantity of use," said John Johnson, director for literacy and mathematics for the state Department of Public Instruction.

But there’s not a lot of research on what technology works best in the classroom, said Rich Halverson, who wrote the book, "Rethinking Education in the Age of Technology: The Digital Revolution and Schooling in America."

"Learning technologies are in a time of growth now. Twenty years from now we’ll have much better tools to support learners. So right now there’s a lot of experimentation," explained Halverson, a professor of education leadership and policy analysis at the University of Wisconsin-Madison.

The fact that Wisconsin fourth graders using more technology scored lower on the NAEP than those who had less technology in the classroom doesn’t surprise Halverson because he said often students who struggle in school are assigned technologies designed to help with remedial instruction. The study did not control for that factor.

And while Bouygues said it did control for outside variables like wealth and students’ prior performance, the study doesn't show technology actually caused changes in student learning.