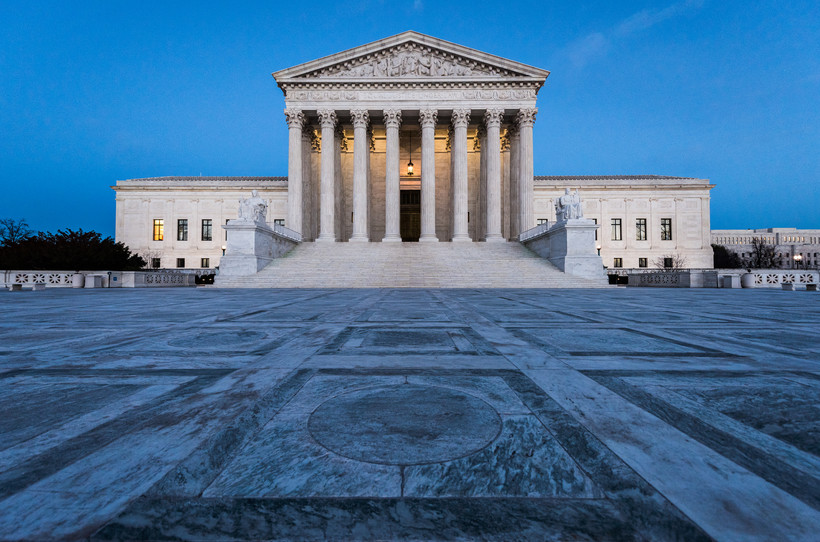 Expert Says These Interruptions Can Have An Impact On Rulings And Undermine Female Justices
By J. Carlisle Larsen
Share:

A 2014 study at George Washington University found men interrupted women they were talking to 33 percent more often than they interrupted men they talk to. That figure underscores the fact that for many women, being interrupted is a frequent part of life.

As women rise to top positions, conventional wisdom might dictate the frequency with which they're interrupted would go down. But a new study looking at the rates of interruptions in the nation's highest court shows high-achieving women may not be immune to interruptions. The four women who have served on the Supreme Court of the United States. From left to right: Justice Sandra Day O'Connor (retired), Justice Sonia Sotomayor, Justice Ruth Bader Ginsburg, and Justice Elena Kagan in the Justices' Conference Room, prior to Justice Kagan's Investiture Ceremony on October 1, 2010. Steve Petteway/Supreme Court of the United States (Public Domain)

Tonja Jacobi is a professor at Northwestern Pritzker School of Law and co-author of the new study, which looked primarily at court transcripts beginning in 2004 through present day.

According to the study, the majority of interruptions came from the male Supreme Court justices and male advocates — those who argue cases before the court.

Jacobi said she was surprised to see advocates, in particular, interrupting female justices, given court rules dictate they stop speaking when a justice is talking.

She said male advocates account for 10 percent of the interruptions whereas their female colleagues accounted for zero percent.

In addition to looking at the frequency with which the female justices were interrupted, the researchers also looked at the language being used in the court. Jacobi said linguists and psychologists have researched a style of speaking called the "female register."

According to this theory, women frequently use questions to modify a statement or overly polite language when interacting with other people.

"One thing I noticed — anecdotally — is that I'd heard women say, 'May I ask?' or 'Can I ask?' or 'Excuse me' before asking their question," Jacobi said. "It's a very polite way to enter the discussion. And I was curious as to whether women would stop saying that as much over time because they were quite often interrupted at that point because they hadn't got to the substance of their question."

However, the researchers noted females justices would use polite language less frequently the longer they were on the bench.

"They would come onto the court using that polite language quite a lot and then they gradually drop down to the level that most men use when entering the court," Jacobi said. "So there's a sort of equilibrium point at which the men naturally speak — with low levels of polite phrasing — and the women gradually learn to be less polite. I think because they're being interrupted so much early on."

Jacobi notes political leanings also tend to influence whether or not a justice is being interrupted or doing the interrupting. She found more conservative-leaning justices are more likely to interrupt liberal justices on the court. This is exacerbated too if the justice is both male and conservative.

Though, she pointed out, that while a fair amount of blame for interrupting has been cast at the late-justice Antonin Scalia, this trend existed before he entered the court.

The interrupting of female justices isn't just an annoying part of court proceedings. They can have unintended consequences with how cases are argued and how opinions are rendered. According to Jacobi, the oral arguments are the best time for justices to learn from the advocates and try to influence other justices.

"If women are being constantly being interrupted and they're not able to ask their questions, they're being kept out of both that information role and that influential role," she said.

Furthermore, Jacobi said she believes these constant interruptions are a damning critique of our society at large.

"I think it matters socially," Jacobi said. "If we see that even when you reach the highest pinnacle of a high-status profession such as the law, and you're still being interrupted because you're a woman, then that says something about the extent of to which our society has progressed as well."