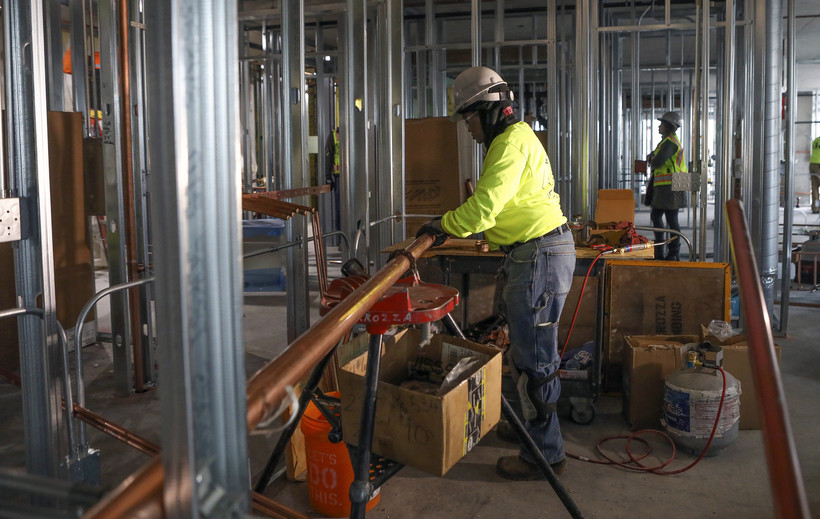 In this Jan. 24, 2019, photo, Zakiyyah Askia installs plumbing at a high rise residence under construction in Chicago. Teresa Crawford/AP Photo

A new study from the Midwest Economic Policy Institute (MEPI) released exclusively to Wisconsin Public Radio finds the repeal of Wisconsin's prevailing wage laws has resulted in lower wages for construction workers in Wisconsin, despite having no statistically significant impact on the cost of public construction projects.

"Prevailing wage provided ladders of access into the middle class for Wisconsin construction workers," Frank Manzo IV, policy director for the MEPI, said, adding that repealing it has had negative consequences for those same workers.

Two of Wisconsin's neighboring states with prevailing wage laws in place showed a smaller drop in annual average income between 2015 and 2018. In Illinois and Minnesota, annual incomes dropped by under 2 percent combined.

The data also showed that, following repeal, there was a decrease in the likelihood that skilled construction workers had employer-sponsored health insurance.

"Repeal has lowered wages and reduced health coverage for skilled construction workers, and resulted in less work for local contractors," Manzo said. "At the same time, repeal has failed to deliver cost-savings on public projects and to increase bid competition — both of which were promised by politicians."

Kevin Duncan, an economics professor at Colorado State University-Pueblo who was part of the study's research team, said when construction workers have a lower income and less health insurance coverage, it has broader effects on local economies.

"When income goes down for construction workers they have less to spend in local retail and service industries," Duncan said. "And then also with a decrease in health insurance ... benefits, that results in greater reliance on public assistance. When construction workers are paid less they have to rely more on public assistance — (food stamps), that sort of thing — so that tends to increase the taxpayer burden."

At the time of the repeal on state construction projects, many Republicans criticized the law, saying it inflated the costs on public projects, and arguing that repealing the laws would save taxpayers money.

But researchers with MEPI said the data shows repealing prevailing wage had no statistically significant effect on the costs for public construction projects.

Researchers also found that the Wisconsin Department of Transportation saw fewer bids from Wisconsin-based contractors after the laws were repealed compared to before. Between January 2015 and September 2017, more than 2,600 bids for DOT projects came from Wisconsin contractors. But between October 2017 and December 2019, following the repeal of the laws, that number dropped to a little over 1,700 bids.

The drop meant the share of bids from out-of-state contractors increased from 9 percent to 13 percent in the same timeframe.

"What that means is ... Wisconsin tax dollars that previously went to Wisconsin contractors and construction workers, (are) now being used to pay workers from out of state," said Duncan. "When that happens, Wisconsin tax money leaks out of Wisconsin and it stimulates economies in neighboring states instead of supporting the local economy."

The MEPI study also found there was no statistically significant impact on the racial or ethnic diversity of construction workers before and after repeal. The study did find a drop in the share of women working in construction in Wisconsin after the repeal of prevailing wage, despite that number being extremely low prior to the repeal.