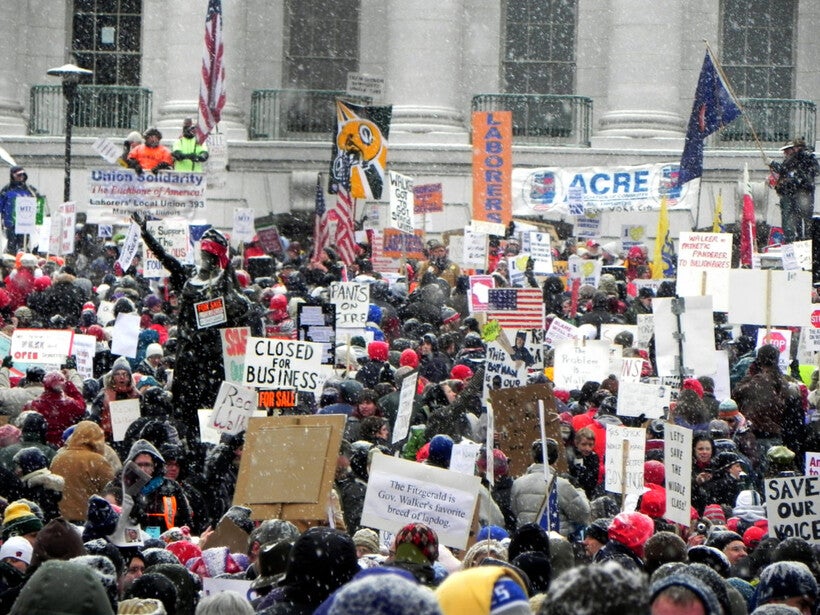 The number of public sector unions in Wisconsin is still shrinking, but at a slower rate, according to a new study from a conservative think tank.

The Wisconsin Institute for Law and Liberty looked at the impact of Act 10, former Gov. Scott Walker’s controversial law that slashed the union rights of most public workers. It sparked protests and a failed attempt to recall Walker from office.

Act 10 also requires that unions hold annual recertification elections, a vote on whether or not the union should still be able to represent employees.

Study author Will Flanders found that when recertification elections started happening regularly in 2014, 540 unions held them. By 2018, that number had dropped by almost a third.

"We’ve seen a decline that was pretty rapid at first, and the trends have somewhat leveled off. There are fewer unions on an annual basis decertifying now than there were in the first few years," Flanders said. "But the pool is continually shrinking. The number of unions is going down year after year."

The study found that although education-related unions are the most resilient, there was "a great wave of teachers’ union decertification" following Act 10.

Doug Keillor, the executive director of the union Madison Teachers Inc., said Act 10 has hurt education in other ways.

"Our teaching force is not as stable. We are not able to recruit the same number of candidates that we were able to before," he said.

"Because this is required, we’ve used this as an opportunity to organize, a positive, a way to build the union," Keillor said. "Would it be better if we didn’t have to do these every year? Yes."

Act 10 only applied to public sector unions, but all Wisconsin unions have taken a hit in the past decade.