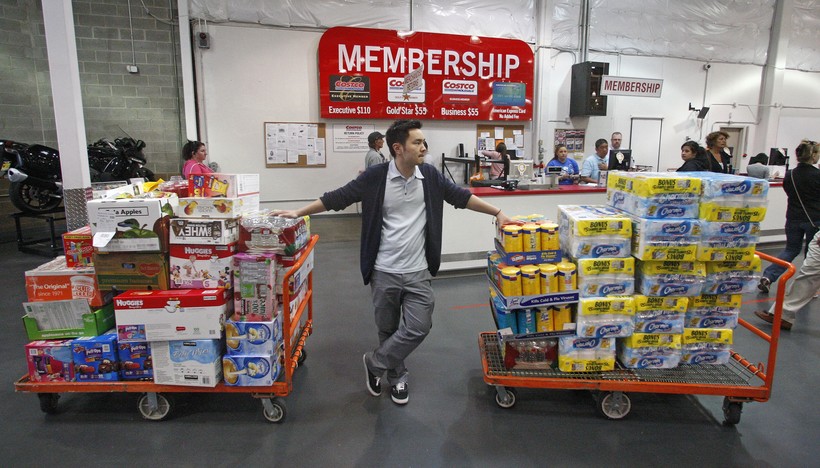 In this May 2012 file photo, David Lee holds on to his carts while shopping at a Costco Wholesale in Portland, Oregon. Rick Bowmer/AP Photo

Study: Low-Income Households Miss Out On Savings Because They Can't Afford To Buy In Bulk

Low-income households in the United States are often forced to pay more annually for some everyday household items like toilet paper due to their inability to buy in bulk or take advantage of sale prices, according to new research.

Mike Palazzolo, marketing professor at University of California, Davis and co-author of the study "Frugality is Hard to Afford," said his research shows it's a privilege to be able to buy 36 rolls of toilet paper at once.

"If you think about when you go to the supermarket and you see say, something on sale, you may not need it right now, but if it's cheaper than it would be in a week from now when you would need it, for many of us it would be very trivial to just go ahead and make that purchase at this moment, or, alternatively, to buy a 26-pack of toilet paper at Costco," Palazzolo said.

"But for low-income households, because they don't have an infinite supply of cash to just throw around, they have to make much more difficult choices, or are prohibited sometimes, or at least inhibited, from engaging in these behaviors."

But it's not just an issue of liquidity and how much money might be in the billfold, said Palazzolo. Oftentimes access to transportation and storage limitations also present hurdles for poor people.

"Often, naturally, lower-income households are more likely renting or may live in a smaller house where there's less storage space, so there are a number of other factors," he said.

Additionally, some discount stores may not be available within low-income households, a phenomenon Palazzolo referred to as redlining. Moreover, even when stores are available in areas stricken by poverty, product prices might be higher due to shipping costs or lack of competition.

It's not uncommon to hear financial advice targeted at poor people that chastises them for not being frugal enough, said Palazzolo. But his research shows it's more complicated than that — there's a lot of built-in obstacles preventing people from spending their money wisely.

Until there's more research to verify some of the larger themes in his study, Palazzolo said he is reluctant to start offering solutions to the problem. However, giving low-income communities access to short-term financial lending without the high-interest rates could be helpful.

"I can say that the evidence does seem to indicate that the kind of loans available to these low-income households currently is insufficient, and we do need to find another solution, and that's probably a very important next step for us to start thinking about," Palazzolo said.