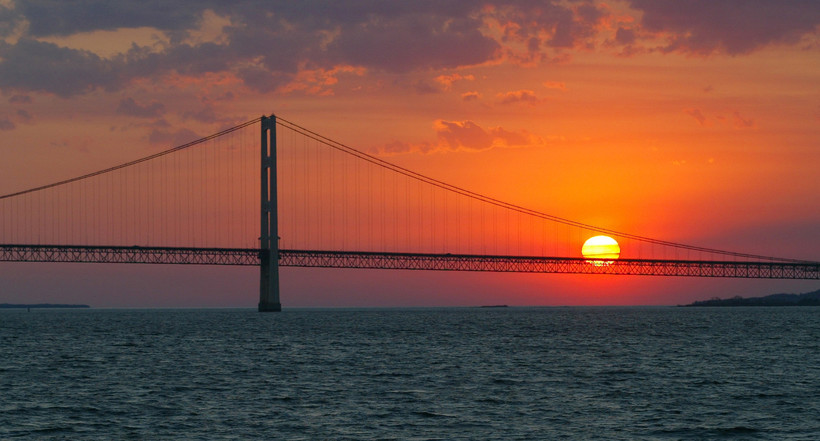 The sun sets over the Mackinac Bridge, the dividing line between Lake Michigan and Lake Huron, at Michigan's Mackinac Straits.

Rise In Algae Called Cyclotella May Warn Of Changes To Food Chain
By Danielle Kaeding
Share:

A warming climate is transforming the base of the food web in the Great Lakes, according to a new study published recently in the scientific journal "Limnology and Oceanography." Researchers say rising lake temperatures could spell changes for the rest of the food chain.

Euan Reavie, senior research associate with the Natural Resources Research Institute in Duluth, said they studied fossil remains in sediment cores from all Great Lakes to identify changes over the last 200 to 300 years. What was discovered is a link between higher temperatures and changes in the lake that contributed to the rise in a certain type of algae called cyclotella, he said. The algae is taking over the rest of the diatom community it originates from, Reavie said. A picture of Cyclotella under a microscope. FWC Fish and Wildlife Research Institute (CC BY-NC-ND 2.0)

Any changes in organisms that feed on algae could ultimately mean changes for fish species, Reavie said.

"Those who are concerned about cold-water commercial fisheries in the Great Lakes, hopefully, will also be concerned at this point that we are seeing a change in the base of the food web that essentially drives the aquatic ecosystem in all of the Great Lakes," he said.

The changes researchers are seeing have been observed in lakes outside the Great Lakes that are virtually untouched by human development in many cases, ruling out impacts from pollution and invasive species.

Bob Pillsbury, a professor with the University of Wisconsin-Oshkosh who assisted with the study, said it's the first example of biotic changes in the Great Lakes due to higher average temperatures.

"Since algae are the base of the food web, if these things change, we're not sure what else is going to change with it," Pillsbury said.

Study co-author Craig Stow, a scientist with the National Oceanic and Atmospheric Administration lab in Ann Arbor, Michigan, said the increase in cyclotella within sediment cores has been noted more in the last 20 to 30 years.

"These changes aren't hypothetical. We're really seeing some things happening," Stow said. "If we value the services we've gotten from the lake, the ecosystem services as they're referred to, we either take steps to try and maintain the lakes or we get used to the new state they're moving into."

Reavie said they'll be pursuing funding to do additional research on what the rise in cyclotella means for the Great Lakes.

"Ultimately, what we need to do is try and predict what future conditions are going to be assuming this change is going to continue," he said.

The research was funded through a collaborative agreement with the U.S. Environmental Protection Agency and included work from the Natural Resources Research Institute, NOAA, and Environment and Climate Change Canada.