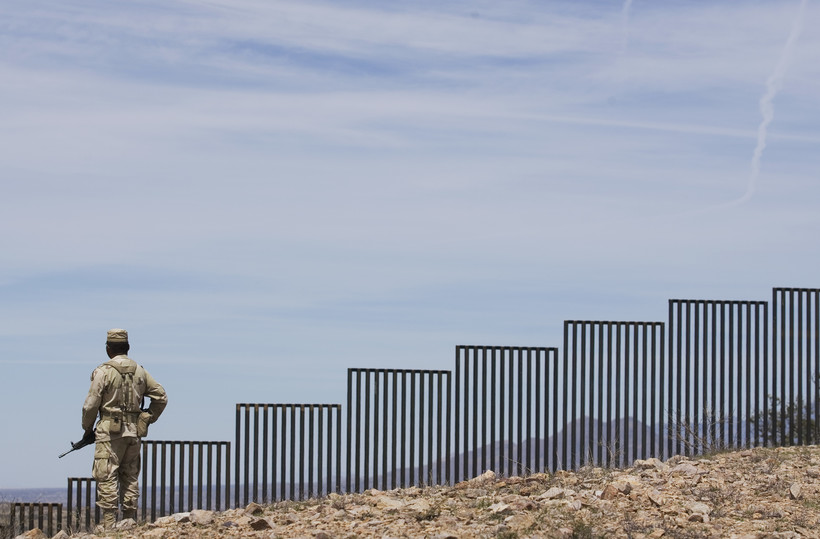 A Mexican soldier patrols along the U.S.-Mexico border wall on the outskirts of Nogales, Mexico, Tuesday, April 1, 2008.  AP Photo/Guillermo Arias

Making a case for tighter security at the border, President Donald Trump has often linked illegal immigration with increased crime.

But a new study from University of Wisconsin-Madison sociology professor Michael Light suggests people living in the country illegally are linked to a decrease in violent crime, not an increase.

The study, published in March in the journal Criminology, is one of the first on the topic, Light says.

"Up until recently, we really haven’t had reliable information on the size of the undocumented population," he said.

He then compared that with violent crime data as identified by the FBI: murder, rape, aggravated assault and robbery.

The population of immigrants without legal permission living in the United States more than tripled between 1990 and 2014. But Light found the increase was correlated with a decrease in murder, rape, aggravated assault and robbery.

Light said there are logical reasons to believe people living in the country illegally could be associated with an increase in crime, they often have higher rates of poverty and lower educational attainment than the average U.S. citizen. These are also traits typically associated with increased crime.

However, those immigrating illegally have reason to avoid the criminal justice system, for fear of being deported.

There’s also the "selection effect." This is an idea Harvard University sociology professor Robert J. Sampson wrote about in the New York Times back in 2006.

"Undocumented immigrants often come here seeking things like educational opportunities, employment opportunities," Light said. "And undocumented immigration, in all candor, requires a tremendous amount of motivation and planning. So to the extent that those characteristics, hard work, motivation, determination, those things tend not to be very highly correlated with having a high criminal propensity."

Light’s study also looked at reported crimes to the FBI. Media outlets have reported that some immigrants are too scared to report crime for fear they’ll be deported.

But Light said his analysis was supplemented with data from the National Crime Victimization Survey, which specifically takes into account crimes that are not reported to authorities. That suggested crimes weren’t simply underreported, he said.

His study was a broad look at immigration and crime. But much of the rhetoric around immigration policy involves so-called "sanctuary cities." There’s no legal definition, but the phrase generally refers to cities that limit cooperation with federal law enforcement of immigration law.

"Every day, sanctuary cities release illegal immigrants and drug dealers, traffickers, and gang members back into our communities," Trump said in a March speech on the opioid crisis.

But other studies have suggested that on the city level, cities with "sanctuary" policies are also associated with a decrease in violent crime.