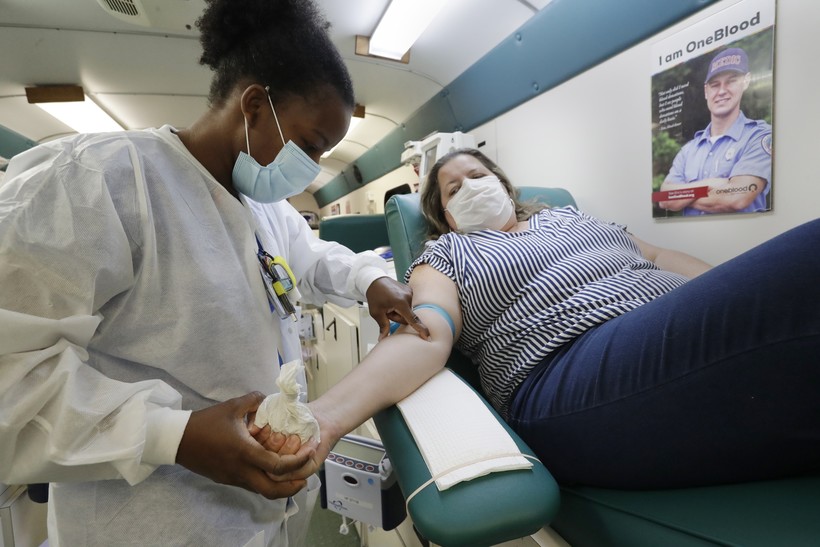 Phlebotomist Josianne Fiefie, left, looks for a vein as Maria Teresa Andreychuk prepares to donate blood aboard a OneBlood blood donation bus, Wednesday, April 22, 2020, in Miami. Due to the COVID-19 pandemic, thousands of blood donation sites have been closed and the need for blood is now critical. Wilfredo Lee/AP Photo

Giving blood during the coronavirus pandemic is safe — as long as standard screening precautions are taken — a new study by the National Institutes of Health found.

The study hopes to reassure donors reluctant to give blood because they were previously infected with COVID-19. But researchers concluded the likelihood of a transfusion recipient receiving blood with trace amounts of SARS-CoV-2, the virus that causes COVID-19, was approximately .001 percent and that the likelihood of transmission by blood transfusion was insignificant compared to airborne transmission.

The study’s findings are good news and come at a time when blood supply is traditionally low.

"When the weather starts to get nice and people are able to get out we do see a dip in turnout. So, we are encouraging donations," said Justin Kern, communications director for American Red Cross of Wisconsin.

As of June 4, half of the blood centers in the Midwest were down to a two-day supply. A three-day or more supply is needed to meet normal operating demands. The Midwest comprises 29 percent of nation’s blood supply, more than any other region.

During the pandemic blood drives at offices, schools and local churches were canceled as people sheltered in place. Shortages were seen across the country, still Kern said blood donation has been strong the last 15 months.

Verona resident Pam Moen-Thieding even gave blood for the first time during the pandemic. She decided to do so last May after seeing how a blood transfusion improved the condition of her 89-year-old mother, who had anemia.

"I saw the difference that it made for her, literally the life come back into her. We were just so grateful that someone had donated that blood so that when my mother needed it, it was available for her," said the 56-year-old Moen-Thieding.

At the same time her mother was ill, her mother-in-law was undergoing chemotherapy for Non-Hodgkin's lymphoma. She didn’t need a blood transfusion, but "certainly could have at any point," recalled Moen-Thieding.

For Mother’s Day last year, she and her husband, Tom Thieding, 58, both donated blood in honor of their moms. Thieding has been a longtime donor, but Moen-Thieding hadn’t given blood after fainting the first time she tried many years ago. 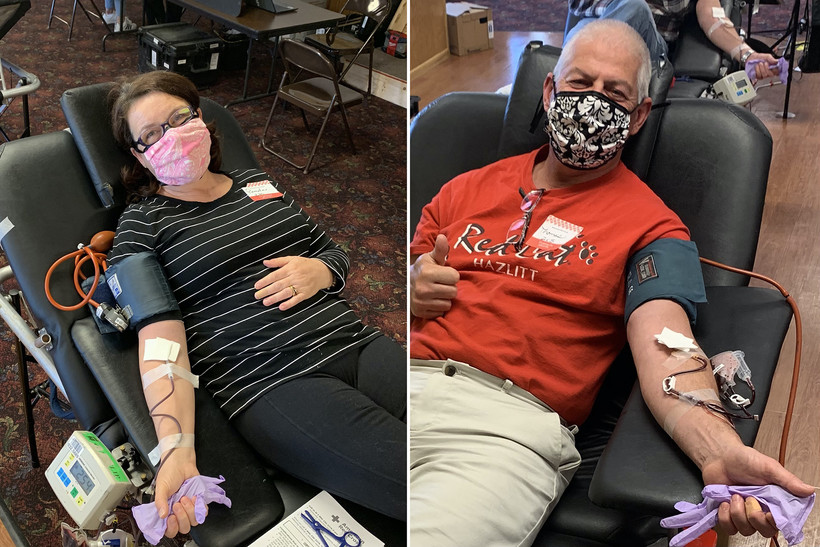 Pam Moen-Thieding, left, and Tom Thieding donate blood in honor of their mothers who were ill at Sugar River United Methodist Church in Verona in May 2020. Photo courtesy of Pam Moen-Thieding

As vaccination against COVID-19 becomes more widespread and pandemic restrictions begin to loosen, many venues are expected to resume as blood donation sites in the coming weeks and months, Kern said.