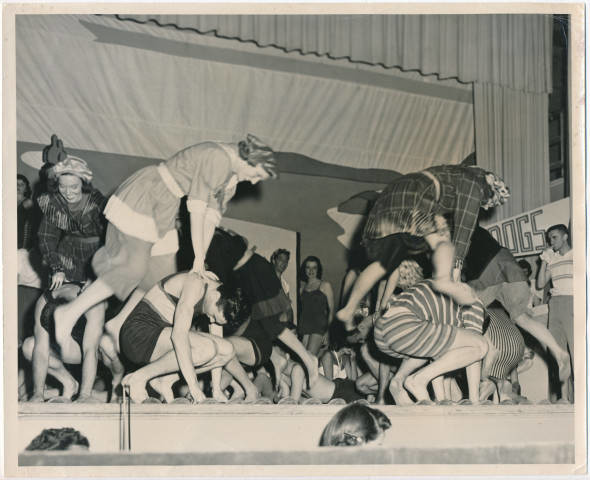 Ripon College students leap frog across the stage in the 1951 Ver Adest performance at Ripon College.

Ver Adest, Latin for "spring is here," entertained students and the community with elaborate student-performed (and often student-written) songs, comedy, and dance reviews. The shows began in 1946 and continued until 1957. The productions were so popular that at one point, as many as a quarter of the student body was involved.

The shows earned mentions in newspapers around the state and a student’s participation was mentioned in graduation and engagement announcements in hometown newspapers. For instance, Diana Starnes and James Zievers both received mentions in the Kenosha Evening News in 1950 for their graduation from Ripon and having participated in Ver Adest. Another student received mention in the Racine newspaper for her selection as "make-up chairman" of Ver Adest in 1955, while the engagement of a woman from Palos Heights, Illinois, made her local newspaper with prominent mention of her time in Ver Adest.

The idea for an annual variety show came from music professor and Dean William Peterman. It was based on the Women’s Athletic Association and Men’s Union musical at Northwestern.

Despite its popularity, interest in the performances began to wane in the late 1950s and the program ended after 1957’s performance of "Pajama Game."