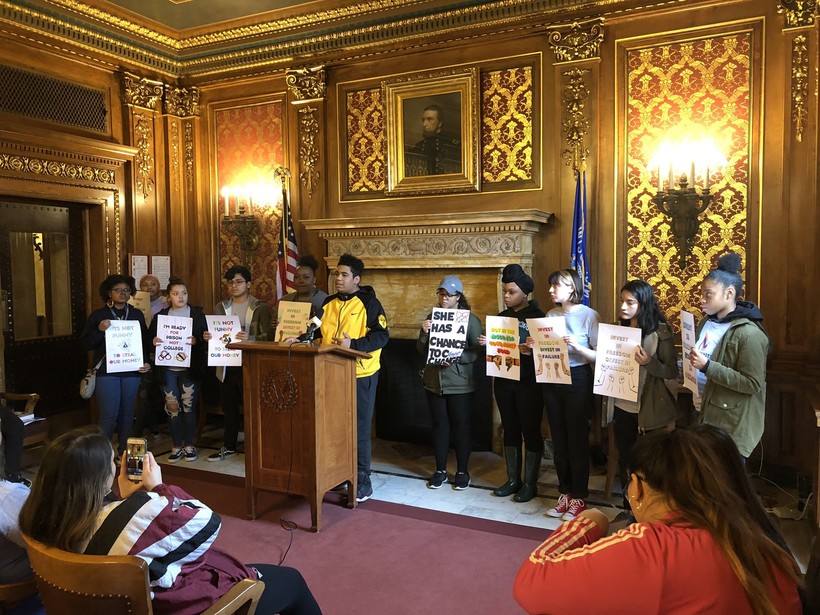 Student activists from Milwaukee Public Schools call on lawmakers Tuesday, April 30, 2019 at the state Capitol to "divest from failure" and "invest in freedom" for youth of color through a number of reforms. Photo courtesy of Kyle Pfister of Leaders Igniting Transformation

About 50 Students Met With Lawmakers To Demand End To Harsh Punishment, Police In Schools
By Phoebe Petrovic
Share:

Student activists from Milwaukee Public Schools are calling on lawmakers and the district to "divest from failure" and "invest in freedom" for youth of color through a number of reforms, including removing police officers and metal detectors from schools, increasing the number of social work and mental health professionals, and implementing culturally responsive curricula and training.

About 50 young people, mostly students of color, who are activists with the community-based justice organization Leaders Igniting Transformation (LIT), met with lawmakers such as Sen. Chris Larson, D-Milwaukee, to present their "Youth Power Agenda," detailed in a report co-authored by LIT and The Center for Popular Democracy.

"We want to evoke change in our elected officials because it’s harder to ignore a problem when it’s right in your face," said Prince Grayson, an 18-year-old senior. "We aim to be an alarm because you can’t silence us."

Grayson says it is "infuriating" MPS students receive less support than students in other districts.

"They get more funding and more chances to develop as characters," he said.

"MPS may cut the classes we actually need, but they’re not shy to add more security to public schools," Grayson said. "We have to make them remember that we’re kids, not inmates, and not to hold back the money that we need."

He says he asks of Gov. Tony Evers: "Invest in our future, not in our prison sentence."

"People wonder why there are so many suspensions," Spingola said. "It’s because students have struggles outside of school that we all don’t like to talk about. Students don’t have access to support outside of school, so they need it in school." 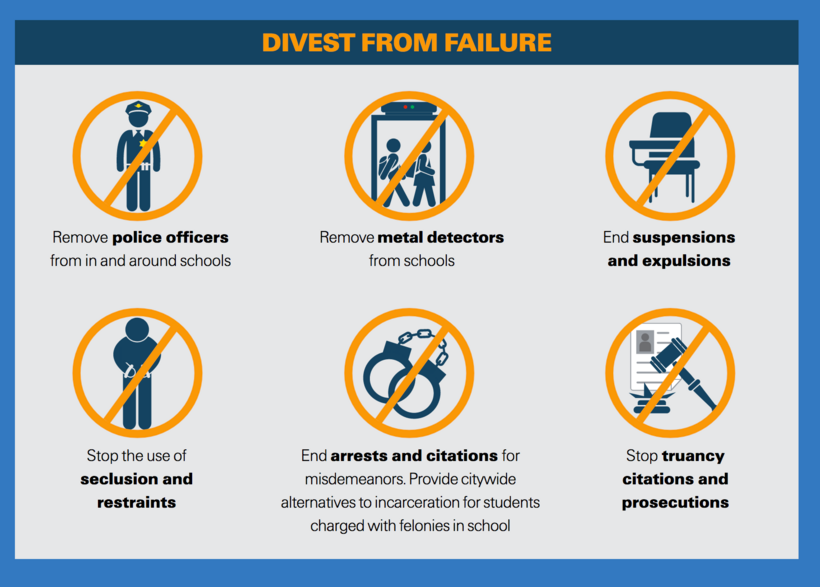 Courtesy of Report co-authored by Leaders Igniting Transformation and The Center for Popular Democracy.

Spingola, who has post-traumatic stress syndrome, says he benefits from in-school counselors.

"I come to school everyday and I have really high anxiety all the time," he said. "But I don’t let that mess with me because I have support in the school that helps me calm down."

All students attending MPS should have access to full-time mental health professionals, as well as arts education and mindfulness training, Spingola said.

"For kids who don’t get that support, it can lead to violence, suspensions and expulsions, which leads to lower academic performance, dropouts, entanglement with the law," he said.

Students also called for the end of seclusion and restraints, physical methods of control that disproportionately affect young people with disabilities in the school district. The report states 91 percent of those subjected to these methods have disabilities, despite these students accounting for a mere 20 percent of the district’s total enrollment. 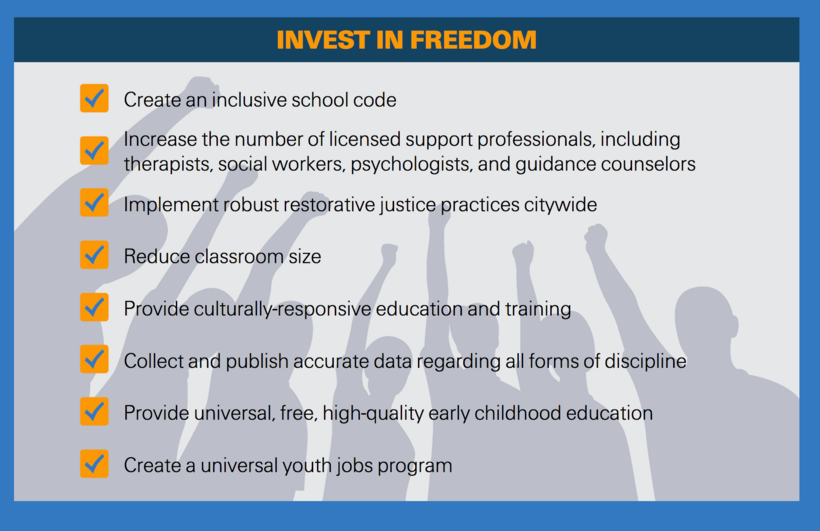 Courtesy of Report co-authored by Leaders Igniting Transformation and The Center for Popular Democracy.

The group aims to break the "school to prison pipeline," a system of policies and procedures that funnels students, particularly students of color, into incarceration.

In the 2013-14 school year, black students at Milwaukee Public Schools accounted for nearly 85 percent of all referrals to law enforcement, despite accounting for only 55 percent of the student population, according to the report.

Research shows little difference in behavior between black and white students, despite the administration of disparate discipline.

In one case, a black student received a one-day suspension for "cell phone use and chronic disruption," while a white student with the same behavior received just a "warning and counseling."

The youth of LIT seek to end such disproportionate punishment — and forestall its consequences — by codifying inclusive school codes that ensure due process and supportive interventions for disciplinary action, and eliminate the use of what they consider harsh and harmful punishment.

Combined, the young activists say, these reforms may help create nurturing environments in which youth of color — and the communities in which they live — can succeed.

On Tuesday, Milwaukee Public Schools said they have no comment.