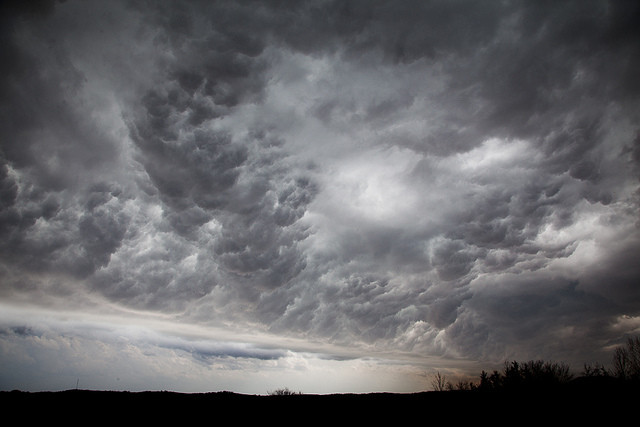 Hail up to the size of a baseball fell in parts of Brown, Outagamie and Waupaca counties Tuesday morning.

In Door County, trees and power lines were knocked down and Highway 42 was closed between county Highway A and Gibraltar Road because a live wire was arcing on the roadway. The storm caused downed trees at Peninsula State Park, and while the park is still open, the Eagle Bluff Lighthouse was closed as of Tuesday afternoon, according to the Wisconsin Department of Natural Resources.

The National Weather Service issued a thunderstorm warning for Sheboygan and Fond du Lac counties where winds of 60 mph were expected.

Scott Berschback, a meteorologist with the National Weather Service in Green Bay, said it's unusual for severe storms to form in the morning hours, but not unheard of. He said the line of storms that moved through northeastern Wisconsin formed when a pocket of warm, unstable air from the west met a cold front moving eastward.

"And what happened was, we had very strong instability in the mid-levels of the atmosphere, which really produced strong updrafts," said Berschback.

"Luckily, when hail gets this large, it's not widespread," said Berschback.

Toby Paltzer, the chair of the Town of Center's Board of Supervisors, said hail started falling at his home at around 9:30 a.m. It was small at first, said Paltzer, but within 10 minutes larger stones were falling and a picnic table looked like it was covered in snow.

"Most of them are golf ball size and some are tennis ball sized for sure," said Paltzer. "Later, we captured some and put them in the freezer, and they measured two and a half inches across. So, that's a good size chunk of ice."

The weather service office in Green Bay said there was a report of hail breaking a window in the Town of Center but no injuries.