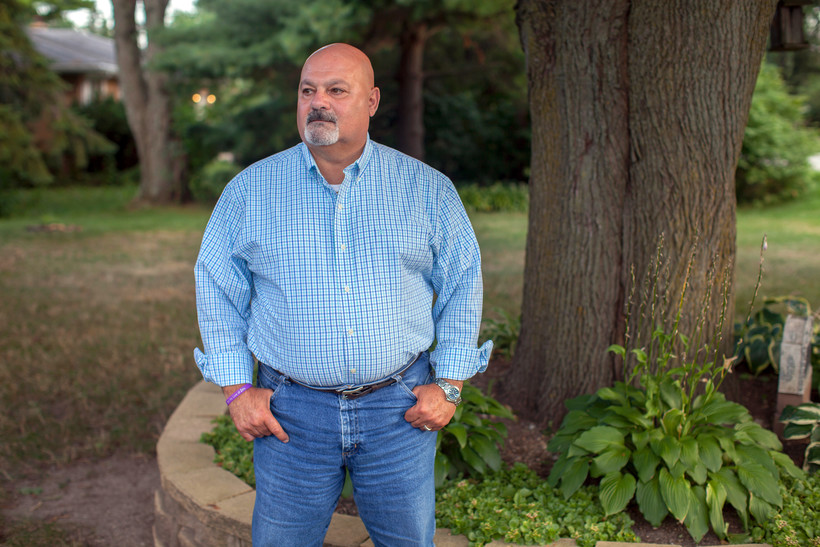 Elvin Daniel's sister, Zina Haughton, was killed in a mass shooting in 2012 at a Brookfield, Wisconsin, spa. The perpetrator, her estranged husband Radcliffe Haughton, was legally prohibited from buying a gun.

In 2012, Elvin Daniel’s sister, Zina Haughton, was killed in a mass shooting at a spa in Brookfield, Wisconsin. The shooter, her estranged husband Radcliffe Haughton, was prevented from owning a firearm by a restraining order.

Had he tried to buy a gun from a federally licensed dealer, he wouldn’t have passed the required background check. Instead he went online, to a website called ArmsList.com. He found a seller and paid cash for a semiautomatic handgun. The next day, he walked into the Azana Spa and shot seven people, killing three.

After losing his sister, Daniel has become an activist. He’s lobbied at the state and federal level for universal background checks. In 2014, he testified before the U.S. Senate Judiciary Committee.

"You know, is one life, isn't that worth it?" he said. "To go through a background check, just to save one life? 10 lives? I mean, when is enough enough?"

Daniel was, and is, very familiar with firearms. He’s a proud member of the National Rifle Association, a hunter and enjoys target practice.

"I was one of those that says, 'You know what, leave me and my guns alone,'" Daniel said. "I still feel that, but I believe that everybody should go through a background check when they buy a gun."

Experts say expanding criminal background checks to include private gun sales is the most effective way to reduce gun violence —18 states and the District of Columbia have done just that, closing the so-called gun-show loophole. According to a recent Marquette University Law School Poll, 85 percent of registered voters in Wisconsin claim they support background checks for all gun purchases, including unlicensed sellers.

Despite all that, attempts to expand background checks in Wisconsin have faltered, leaving gun violence prevention advocates such as Ted Alcorn to keep making the case for legislative action.

"We already have a background check system that we've invested a lot of effort in creating, why wouldn't we require a person who's buying a gun from an unlicensed seller to uphold the same requirements that we require when they buy a gun from a licensed dealer?" said Alcorn, a research director for the anti-gun violence advocacy group Everytown For Gun Safety.

But Republicans who control state government in Wisconsin have blocked attempts to require background checks on guns purchased from private sellers. Bills introduced by Democrats to enact universal background checks in recent sessions have died without a hearing. Retired police officer Curt La Haise runs a shooting range in Deerfield. He teaches self-defense and NRA-sponsored firearm courses. He said he buys his guns from licensed dealers, mostly because he usually gets a better deal.

La Haise said he wouldn’t have a problem requiring background checks for private sales, as long as the requirements didn’t go beyond what’s required from a licensed dealer. But he’s skeptical it would do anything to reduce gun violence.

"They're going to acquire them regardless of laws because they're criminals," La Haise said. "They don't recognize laws."

The NRA is staunchly against laws that would require universal background checks. In an email to the Wisconsin Center for Investigative Journalism, NRA spokeswoman Catherine Mortensen said these laws "criminalize the commonplace practices of law-abiding gun owners," adding that she believes they "cost law-abiding gun owners time, money and freedom."