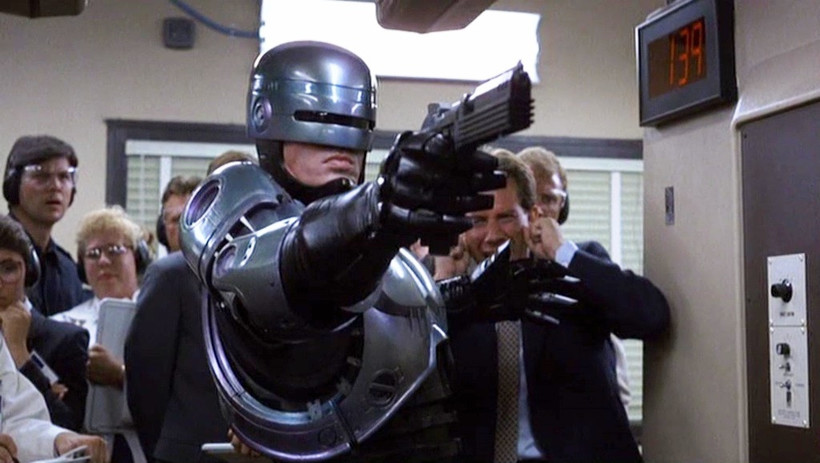 "Robocop" is a 1987 sci-fi/action film about a cyborg police officer. A massive statue of the character is seeking a home. Film still

The mayor of Stevens Point has a message to the creators of an 11-foot, two-and-a-half ton statue of Robocop: If Detroit doesn't want it, central Wisconsin does.

The statue of the 1987 sci-fi/action movie icon is a crowd-funded, internet-fueled project a decade in the making. Now, the work is complete — but the Michigan Science Center, which was to be its permanent home, has announced that it won't host the statue.

"What more fitting tribute than to have the homeless Robocop statue come home to Stevens Point?" Wiza said.

First crowdfunded back in 2011, now a decade later Detroit's RoboCop statue is finally complete. But it is still awaiting a final place to stand so the journey is far from over. pic.twitter.com/hQXXa0cGwD

If there's one thing Detroit's experience has demonstrated, it's that people on social media love talking about a giant Robocop statue.

On Facebook, Wiza's friends and members of a Stevens Point discussion group immediately started speculating about the best places in town for the statue: in the middle of the city's roundabout, maybe, or in front of the police station. And Wiza started making calls to the Detroit-based artists who designed and built the statue.

"They're probably thinking there's some kook in central Wisconsin who doesn't know what he's talking about," Wiza said.

Wiza even reached out to Weller's family in town to see if the actor would consider weighing in on behalf of Stevens Point as the statue's eventual home.

There are some obstacles.

From the start, the project has been funded and cheered on by Detroiters, because that's where the film was set. The project got its start when a resident tweeted at then-Detroit Mayor Dave Bing calling for its creation; the artists group that ended up building it, Imagination Station, is a Detroit collective. On Friday morning, Wiza wrote on Facebook that he had received a response from one of the artists, who said they are committed to keeping the statue in the Motor City and are near an agreement with a new site.

But near an agreement is not the same as having completed one, and the Robocop statue has not yet been unveiled to the public. Wiza said he knows his is a longshot bid, but that doesn't mean he's not "100 percent serious." He envisions a spot in a city park that could then be renamed Peter Weller Park.

The film is about a cyborg police officer who battles the forces of corruption and criminality in a dystopian urban landscape. It's a super-violent satire of violence in film, and although the plot contains other elements of social satire, audiences from the late '80s on mostly reveled in its campy premise. It spawned sequels, a children's cartoon and a live-action TV series, as well as countless toys and collectibles. It got a film reboot in 2014, and a sequel is reportedly in the works.

Weller went on to act in films directed by Oliver Stone and David Cronenberg, and appeared in 2013's "Star Trek Into Darkness."

As for the statue, Wiza is watching for an announcement out of Detroit, but also making known Stevens Point's continuing interest.

"If they don't have a home for it in Detroit, bring it home to Peter Weller’s hometown," Wiza said. "We would welcome that with open arms."